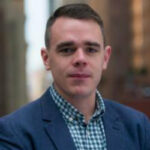 Michael J. O’Loughlin is the national correspondent for America and host of the podcast “Plague: Untold Stories of AIDS and the Catholic Church.”