More bad news. When will it cease? 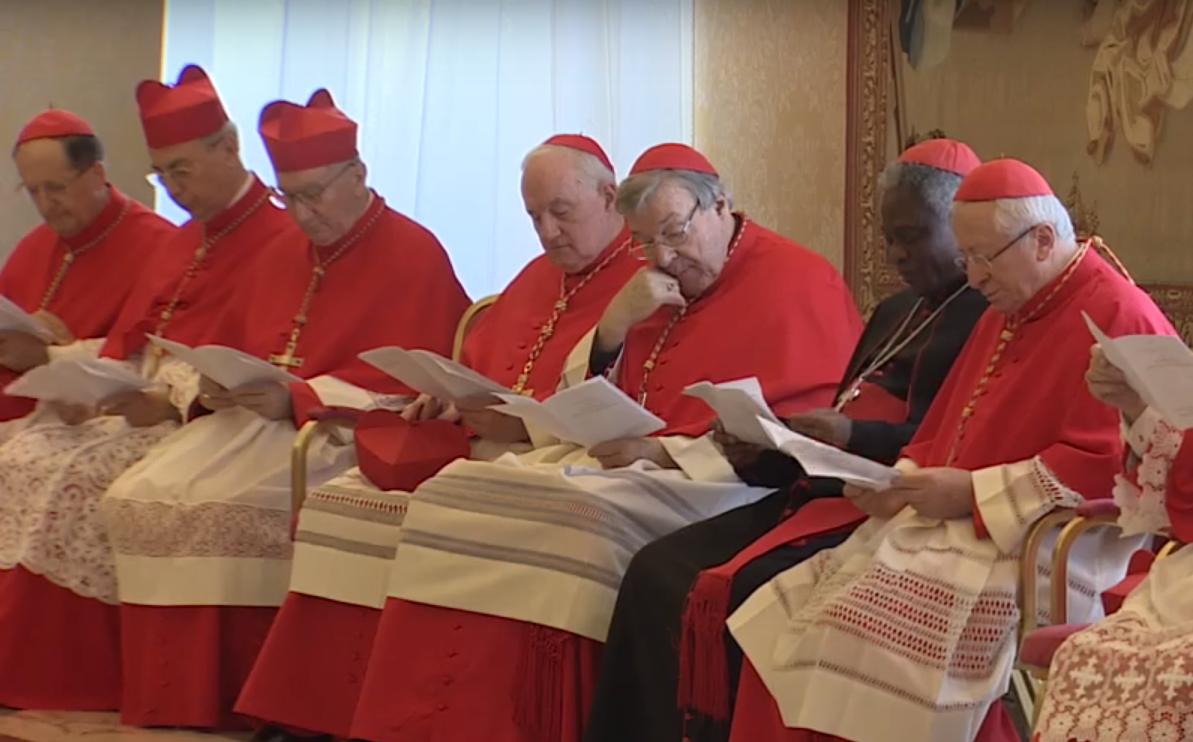 And this latest news has come towards the backend of your stellar career performance. You had only just escaped from your prison cell and from the indignity of a criminal record when another heavy body-blow has landed. At an advanced age, your career at the top appears to be in ruins. Where to for you from here?

“Surprised” doesn’t seem to capture the moment. I can’t help thinking you’ve often had difficulty during your long ecclesiastical career in the spotlight, striking the right note.

Disappointed – saddened – annoyed – depressed – traumatized – shocked – bloody angry – furious – wacked, crushed and gutted, perhaps ? I am wondering, George, how you really feel now that the redacted sections of the original report have been made so public. Your brief statement simply announced that you were “surprised by some of the views” of the Royal Commission and that its “views” were not supported by the evidence.

“Views”. A man in the street has views. Your mother had views. A social or political commentator expresses views. Any Tom, Dick or George can have views on any number of issues. The royal commissioners did not report their views – they made findings. The bad news is that the royal commissioners who were commissioned by Her Majesty to hear the witnesses, examine the documents, to analyse and assess the evidence have made disparaging findings about your integrity, your truthfulness, your character – albeit on the balance of probabilities.

Our system of law, whether criminal or civil, doesn’t deal in Truth or with certainties such as findings of innocence, any more than the modern sciences do. It leaves these matters to philosophy, to religion and ultimately to God. In making its orders and findings of fact, the law only strives for a comfortable state of satisfaction or contentment, and deals in probabilities and reasonable doubt –‘satisfied beyond reasonable doubt’ or ‘satisfied on the balance of probabilities’. Once the evidence had been carefully weighed, on the balance of probabilities, the commissioners found your evidence wanting.

A team of Her Majesty’s commissioned officers heard the evidence, listened attentively to what you (and others) had to say, and found that, on the balance of probabilities, they couldn’t trust that on your oath, you had been telling them the truth, the whole truth and nothing but the truth. Unfortunately for you (and for the Vatican – to say nothing of the little people in the pews), they found your evidence was implausible, untenable, unreliable, inconceivable and unbelievable. They found as matters of fact, and contrary to your denials, that they were satisfied that as a young priest in the Ballarat diocese and later as a bishop and archbishop in Melbourne, you played a part in the unholy, ghastly mess involving sexual abuse of children.

Child sexual abuse by the clergy had appeared on your radar as early as 1973. You were involved in moving Father Gerald Ridsdale (a known criminal) from parish to parish in the diocese of Ballarat – Mildura, Swan Hill, Warrnambool, Apollo Bay, Ballarat, Mortlake and on to Sydney in 1982. Ten years to ply his filthy trade, to torture little ones and their families. You received a complaint from a twelve-year-old boy about the suspicious and criminal behaviour of a Brother Ted Dowlan, and had neglected your duty to the community and the pupils at St Patrick’s school by simply ignoring the complaint. Shame! George, these are terrifying findings.

And then there was your failure to act to remove that nasty psychopathic parish priest, Peter Searson. In charge of the parish of Doveton for thirteen years. Numerous complaints of his criminal behaviour (rape, possession of guns, cruelty to animals, humiliation of his women parishioners, child sexual abuse) – a complete madman let loose to wreak havoc on the stunned people of God – and as the bishop in charge of that area, you failed to take steps to stand him down and report the complaints to the police. George, let’s not muck around. These damaging findings have to mark the end of your illustrious career. Where do you go from here?

Contrary to what you told them, the commissioners were satisfied that you knew from an early stage what was going on; you adopted an attitude of studied ignorance to avoid your pastoral responsibilities to the vulnerable lambs and their mothers; that you could have protected children from harm and you didn’t; that when you said that you had been deceived by your bishop and by other senior figures, you were not telling the truth; and that you were, though only in part, responsible for the terrible mental agony and torture suffered by innocent boys and girls, by their parents and grand-parents, their brothers and sisters. It’s horrible to contemplate, but you played a part in a criminal and corrupt institution. You were part of a God-forsaken clerical racket of protection and facilitation. Am I out of order, George, in thinking that with your religious background, you must feel a terrible failure, tormented by unimaginable guilt? The “views” of the royal commissioners about your behaviour as a pastor and about the quality of your evidence have proved devastating.

I know that I don’t have to tell you that the Vatican will not be happy. One of its most influential cardinals has been caught in the eye of the storm. The Commission has delivered him a truly awful character reference – failing to tell the truth; part of a clerical cabal of serial offenders and body guards; avoiding your pastoral responsibility; neglecting your duty and trying, by studied ignorance, to distance yourself from the shit coming down the pipeline. It’s to be hoped you won’t be lining up any time soon with the other members of the all-masculine College of Cardinals to elect the next bishop of Rome. As Eddy Obeid knows, such a reputation as you now have follows you round and clings to you like a bad smell. And I imagine you might find it difficult to preach the Jesus Gospel until your “surprise” wears off and we all settle back into our routine.

To tell you the truth, George, our church is on its knees and those of you who have been in charge apparently have no idea what to do. Some of us are surviving by putting our head in the sand and hoping the stink will eventually dissipate. Some of us are still trying to defend the indefensible.- though the bishops and prominent laymen who were so willing to talk after your High Court acquittal have all gone to ground. What can they say? Some of us are denying the bleeding obvious or blaming the messenger. Others are leaving in disgust when confronted with systemic corruption worse than we have associated with banks and big businesses, with elements of the police force and the mafia. And others of us are hanging on by our finger tips to our faith in Jesus and the honourable traditions of our faith, even though our leaders, the Pope and his Vatican officials, seem to be missing in action. Heaven help us. We’re in a mess, and unfortunately you have been found to have made a significant contribution. We are not happy, George.

We are now all curious to know whether you intend to take up where you left off, and slot back into your public role. Do you plan to continue to play a part on the national and international stage in the cultural and theological wars. What contribution remains for you to make?

And I suppose you’re wondering, like all of us, what Rome is going to do. Remove you from the College of Cardinals? Reduce you to the lay state (which, as all laypeople know, would be a horrible fate)? Send you off into exile – to a monastery somewhere perhaps? Or into the desert? Or reinstate you to your prestigious Vatican posts? Let you live out your final years under the shadow of St Peter’s as Cardinal Law of Boston did? Or ignore the whole catastrophe in the hope that it will go away? You shouldn’t hold your breath, George. Rome has refined delay to an art form.

In the meantime, from all reports there will be much to occupy your time. Victims are lining up for compensation. I hear that the Supreme Court has established an Institutional Liability List to process the volume of claims flooding into the system. I suppose “the views” of the royal commissioners will find their way into the evidence to support these victims of clerical sexual abuse in their search for some sort of justice.

Look, George, in the circumstances, it’s probably best, for you and all of us, especially for the traumatized members of your Church, if you take off the robes and rings, put on some sack-cloth, accept the findings of the Commission with all the dignity you can muster, and disappear into a retirement village.

I suppose you are aware that I have never been a fan of yours. However, truly, I have never, and now do not wish that any harm come to you in your twilight years. And I hope we can together wish the victims of institutional abuse healing, justice and peace.