The chaotic incompetence of our roll out of the Covid vaccines? Part 1 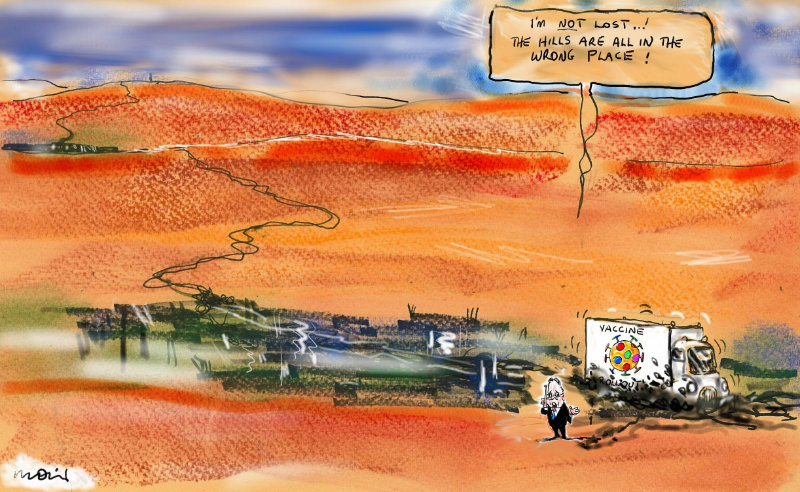 Who would have thought that a well educated and scientifically sophisticated nation like ours would find itself dead last among OECD countries when the percentages of citizens fully vaccinated in each country are examined.

Our reputation as a ‘lucky’ country may be intact but are we really a clever country? The shambles we are making of protecting ourselves from COVID-19 raises a lot of doubts.

It all started well. As an island country at the bottom of the world, able to watch the unfolding pandemic gripping the Northern hemisphere, we were able to institute public health measures that minimised the entrance and spread of the SARS-Cov-2 virus. Sure we had skirmishes with the virus but the world envied our very low incidence of clinically significant infections and deaths from COVID-19. We certainly suffered financially and socially along the way but come 2021 and the availability of very effective vaccines all we had to do was vaccinate Australians and the nightmare would be over for us.

Most SARS viruses we struggle with arrived on our shores on an airplane. OK there was a certain cruise ship that delivered a bunch of viruses but in general our encounter with the Covid viruses followed almost unavoidable escapes of virus from quarantine hotels isolating passengers who arrived by air. We had to use these hotels  but they were never ‘fit for purpose’, especially in terms of minimising aerosolised spread of virus.

However there have been a number of avoidable problems with the program. It beggars belief that once vaccines were available all staff and supervisors involved in the quarantine program were not required to be vaccinated. Early in June a man who regularly drove arriving airline crews to their quarantine hotels became infected with the delta strain of the SARS virus. Yet another example of how vulnerable we are to imported virus arriving by air.

Incredibly it turns out that this driver, who was so frequently being exposed to people from areas of the world with a lot of infections, had not been vaccinated.

Turns out that Border Patrol officials considered that mandating vaccination for all involved in the quarantine service would result in the loss of too many employees but as a result of this incident It’s at last mandatory.

By the way surely we should be saying to international airlines that to fly to Australia all your flight crew must be fully vaccinated and carry proof of same.

We quickly learnt that the virus being spread in the community as a result of this breach was the delta strain  know to be at least twice as infectious as the original versions of the virus we originally encountered. As the infection spread rapidly through the eastern suburbs of Sydney and our contact tracers were struggling, it was pretty obvious that this spread was not going to be contained to four inner city districts.

We all know only too well that failure to contain the spread has forced a ‘lockdown’ in Sydney till July 9. Sadly the travels of the virus have embroiled other states who, seeing the struggle we are having in Sydney, have instituted restrictions which see, as I write, 12 million Australians ordered to stay at home.

Given that we had plenty of notice from infections abroad about the extraordinary infectiousness of the delta strain, it is not surprising that so many of our leading epidemiologist have suggested that the Sydney wide restrictions should have started at least a week before they did. There is much speculation that the NSW Premier, who has been very resistant in the past to ‘lockdowns’ and border closures as tactics to fight viral spread, may have been reluctant for too long to take the measures now in force.

However this latest event has brought into stark focus the woeful progress we are making with vaccinating Australians. Fewer than 7% of us are fully vaccinated. Who would have thought that a well educated and scientifically sophisticated nation like ours would find itself dead last among OECD countries when the percentages of citizens vaccinated in each country are examined.

It is obvious that vaccination is the only weapon available to end the global pandemic and that weapon is powerful and can  do the trick. However you can’t put the fire out with a trickle from the hose.

So can we extract from the communication chaos of late the evidence based facts that we all need to understand as we redouble efforts to protect ourselves and our community by vaccination?

We are born with an immune system that features millions of specialised cells that can recognise all proteins (or bits of them) that may enter our body and potentially harm us. But because of the huge repertoire needed we don’t come into this world with many cells that recognise any one foreign protein (antigen ).

On first encounter however,  the recognising cells multiply big time producing an army of potent cells to repel the invader and remember and be prepared for a future encounter. The second time around we make a far more rapid and effective response. Vaccines activate that first step but are engineered so that they themselves don’t harm us. Sometimes, to really boost our preparation for meeting the real thing,  a second dose of the vaccine is required.

Vaccines produce side effects for one of two reasons. Often when the immune system is reacting to the invasion of something foreign the chemicals released by  immune cells can cause short lived side effects, (Fevers, headaches, fatigue sore arms at the injection site etc ).

Sometimes the agents used to help deliver the structure to which we hope to stimulate a response, can produce side effects such as those of concern with the AstraZenica vaccine’

In reality only two of the many effective vaccines developed are available to us at this time; the Pfizer mRNA vaccine and The AstraZenica vaccine. Both are excellent vaccines and much appreciated around the world. Their development in one year is a miracle of modern medical science. You may have witnessed the standing ovation given to the scientist most responsible for the creation of the AZ vaccine when she was a guest at Wimbledon during the week.

The Pfizer vaccine is the most sought after of all the approved vaccines. Others coming online using the same technology (mRNA) will no doubt be as effective. The vaccine is expensive and very temperature sensitive. The dosing regimen requires two injections three weeks apart. Unwanted side effects with this vaccine are very rare and not serious though in children, again very rarely,  the vaccine can produce Myocarditis ( inflammation of the heart) which most often settles spontaneously but if necessary can be successfully treated.

We wish that  we had available to us NOW the 50 million doses of the Pfizer vaccine needed to immunise Australia. But we don’t.

More than a billion doses of the Pfizer vaccine are on order and there is a lot if understandable pressure to prioritise delivery to countries with raging epidemics and many deaths. It’s easy to understand that our successful efforts to minimise serious illness and deaths from this SARS virus has us low on any priority list.

We have 20 million doses on order and options for more. At the moment we can provide about 300,000 doses a week to Australians but we need much more.

When vaccines became available we expressed interest in buying four of them but we were confident that the AstraZenica vaccine developed at Oxford University would be our ‘go to’ vaccine. It is cheap, highly effective and, most importantly we could soon have our own CSL producing about a million doses a week. Indeed we planned to be an exporter of the vaccine.

Protection with this vaccine requires two injections 12 weeks apart. This though not ideal is however  necessary. After three weeks of the first dose of AZ we have good protection from most SARS variants but giving a second dose at 4 weeks did not optimise protection whereas a second injection at 12 weeks did.

Under clinical trial conditions the Pfizer vaccine was found to give slightly better protection than the AZ vaccine but in the UK where millions of both vaccines have been administered, success in minimising serious illness and preventing the need for a hospital admission is the same for both  vaccines.