Putin has gambled everything on his Snap-Invasion of Ukraine. Now his political survival in Russia is in doubt 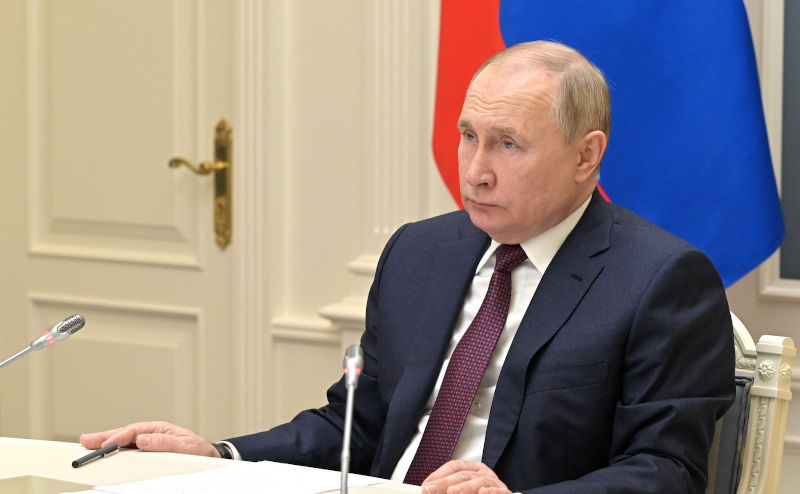 Putin's survival as Russian leader may be in doubt when Russians understand he has plunged into an unwinnable war. Image: Wikipedia Commons

War transforms the political landscape in radical and unexpected ways.

By invading Ukraine, President Vladimir Putin has made an unforced error of historic proportions that will put his own survival as Russian leader in doubt if and when Russians begin to understand that he has plunged them and their country into an unwinnable war.

Moscow is seeking a decisive victory with the overthrow of the Ukrainian government and the surrender of its army. “What we’re talking about is preventing Nazis and those who push methods of genocide to rule in this country,” said foreign minister Sergei Lavrov yesterday. “Right now, the regime that is located in Kyiv is under two mechanisms of external control: first, the West, led by the United States, and secondly, neo-Nazis.”

Talks would only begin when the Ukrainian army laid down its arms. These are maximalist targets that are unlikely to be achieved by 190,000 Russian troops who are under orders to overrun and pacify a country nearly three times the size of Britain and with a population of 44 million.

Though the war is still in its early stages, it is clearly not proving a walkover for the Russian forces, who are facing stiff resistance. The Russian army will have its work cut out gaining control of the cities, towns and highways, and holding them in the face of attacks from regular and guerrilla forces in the great swathes of Ukraine that Russian troops will not be able to hold.

Possibly the Russian commanders hope to find local allies in the Russian-speaking population which they claim was subjected to genocide. Russian TV appeared to show a map distinguishing Russian and Ukrainian speakers. But all the evidence is that there is far less pro-Russian sympathy today than there was before a pro-Western government took power in Kyiv in 2014.

It is an extraordinary gamble on the part of Putin who once had a reputation for being good at calculating risks. Accusing the Kyiv government of being neo-Nazis and calling for demilitarisation of Ukraine means installing a pro-Russian regime backed by a permanent military occupation. This is something the Soviet Union would have had difficulty doing at its height – and Putin’s Russia is far less powerful.

Even attempting to carry out such a programme will mean significant Russian casualties, which Putin will have to explain to the public back home. He will also have to convince the Russian political elite about how he plans to win a war against strong local resistance supported by most of the great powers of the world.

His answer to questions about Russia being an isolated pariah state is a not-so-veiled threat to use nuclear weapons against any foreign state that interferes with his campaign in Ukraine. But this sort of deterrence is a frightening prospect for Russians who suddenly find themselves potential targets for nuclear retaliation – a threat that the fall of the Soviet Union was supposed to have ended.

Past Russian military interventions under Putin were carefully calculated but success in Chechnya and Syria and may have made the Russian leader overconfident. He regained control of Chechnya after invading it in 1999, but the country is small, could be easily isolated from the outside world and the opposition was fragmented. Ukraine is more than 30 times as big and has open borders to the west that can only be closed by deploying tens of thousands more troops.

And this prolonged campaign of repression, inevitably involving atrocities, as with all military occupations, is to take place before the eyes of the world. Western governments will supply the resistance with arms and money and will be determined to ensure that Putin does not succeed. Sanctions may only have a real impact long-term, but then this is likely to be a long war, which many Russians regard as misconceived and without any hope of success from day one.

So why did Putin do it? Explanations that he has gone mad or plans to rebuild the Soviet Union are propagandistic. More convincing as a reason for him taking this present extraordinary risk is hubris, which is an occupational disease among those who have been too long in power – 22 years in Putin’s case.

Such leaders trust too much in their own judgement, while their advisers come to resemble courtiers who hold their job because they know how to bend the knee and pay tribute on all occasions to the wisdom of their leader.

The arrogance and ignorance of power does not solely infect authoritarian rulers like Putin. Tony Blair never seemed to know much about Iraq from the time of the invasion in 2003 until the present day. Going by his memoirs, David Cameron has remained proudly ignorant of all things Libyan, a country he helped invade in 2011. Political leaders of all stripes visibly relish the role of warlord and the same applies to Putin.

Leaders are also conscious that success on the battlefield will do them a lot of political good back home. It was an advisor to Tsar Nicholas II who told him that “what this country needs is a short victorious war”. What they got was the Russo-Japanese War of 1904-05 in which the overconfident Russian army and fleet were humiliatingly defeated by Japan. When news of this failure reached home, it provoked the protests and uprisings of 1905 which in turn prepared the ground for the 1917 Revolution.

I have always been bemused by the cavalier way in which governments launch wars on which their own survival depends without thinking through the consequences of failure.

Nasty though they may be, wars often favour democratic change and discredit existing leaders and institutions. They are democratic because wars cannot be fought without mobilising large numbers of people who need to be encouraged to believe that they are fighting in a just cause.

It is not politicians alone who fail to see that wars turn apolitical people into political players. I remember a conversation with a senior American journalist in Washington just before the Iraq invasion of 2003. He spelled out some American plans for a post-Saddam Hussein Iraq. “I don’t think the Iraqi people will like that very much,” I said. “Who cares what they think?” he replied. “Who cares?” A year later, as snipers and bombers targeted their soldiers, the Americans cared a lot – but it was too late.

Regimes may survive many failures, but military defeat or blood-soaked stalemates are too glaring to conceal, and their victims are too numerous to be ignored. Could Putin have some card up his sleeve that will enable him to outmanoeuvre his many enemies? It is difficult to imagine what it might be because he has gambled everything on a decisive victory to be won against Ukraine – and much of the rest of the world. If he fails to deliver, as seems highly likely, then his political survival will be in doubt.

Patrick Oliver Cockburn is a journalist who has been a Middle East correspondent for the Financial Times since 1979 and, from 1990, The Independent. He has also worked as a correspondent in Moscow and Washington and is a frequent contributor to the London Review of Books. He is the author of War in the Age of Trump (Verso).

This article is reproduced with permission from Counterpunch, 28 February 2022

Patrick Cockburn is a journalist who has been a Middle East correspondent for the Financial Times since 1979 and, from 1990, The Independent.[1] He has also worked as a correspondent in Moscow and Washington and is a frequent contributor to the London Review of Books.