Never waste a crisis – we are hearing this a lot, and for good reason. Covid-19 is presenting politicians with a lot of opportunities to slip significant changes through relatively un-noticed.

Of course, the pandemic will give the economic progressives a golden opportunity to predictably spruke a “told you so” line, as conservative governments worldwide uncharacteristically run up massively increased debt in their attempts to minimise the health effects of Covid-19. Where will this debate lead?

My gut tells me the economic and social impacts of the pandemic will be so great that even the most devoutly committed neoliberal ideologues will find it expedient to at least moderate their demands for their traditionally preferred “growth drivers” of tax cuts, reduced regulation and industrial relations “reform” to address the government debt which will be one of the major legacies of the pandemic. But at this early stage (early May 2020) I am seeing only standard free-markets dogma being offered by conservatives in Australia, starting with Scott from Marketing’s initial promise of a “snap back”, a term which seems to have gone out of use because – probably because it sounds a bit too much like the harshness it would produce.

Not so in the United States, it seems. According to an incisive Lexington article in the highly respected Economist, published on 2 May 2020, the expected cracks in the neoliberal dogma are astutely reported as beginning to appear. “The only stiff resistance to the $3trn stimulus authorised by Congress came from (the Republicans’) ultra-libertarian wing.”, of which, Wikepedia says: “…libertarian Republicans…favour deregulation and tax cuts generally, repeal of the Affordable Care Act, and protecting gun rights.” So, they are running true to form.

But, The Economist reported in the same issue, Larry Hogan, the pragmatic Republican governor of Maryland, called letting states go bankrupt “complete nonsense”. ‘Another querulous Republican faction, led by some of the most interesting conservative thinkers,…rejects… market fundamentalism and takes a more flexible and positive view of government than most Republicans have since the 1970s’. (Emphasis added.) ‘Its members…want to turn the party’s attention from economic freedom to socioeconomic outcomes, from corporations to workers. A pro-poor (emphasis added) redesign of one stimulus bill by Senators Tom Cotton, Mitt Romney and Marco Rubio, all affiliated with this faction, was an indication of its growing alignment. Its members believe the crisis has validated their position and pushed it to the centre of politics.’

‘Mr (Senator Oren) Cass, who on May 5th will launch an impressive organisation of this dissident faction, called American Compass, would go further. A former policy director for Mr Romney, he describes the crisis similarly as an indictment of an “economic piety” that ignores many values that markets do not capture, including the well-being of American workers and development of future industries.

Indicative of this new Republican approach to economic policy is this quote from an op-ed in The NY Times of 20 April 2020 by Marco Rubio: “Over the past several decades, our nation’s political and economic leaders, Democratic and Republican, made choices about how to structure our society — choosing to prize economic efficiency over resiliency, financial gains over Main Street investment, individual enrichment over the common good.”

To quote The Economist again: “A commensurate shift in corporate behaviour away from investment in workers, equipment and facilities, and toward churning out short-term financial gains to shareholders has only further sapped our resiliency.” “All, he argued, are products of a misguided homage to economic efficiency, rooted in a “hyper-individualistic ethos”, that the coronavirus has shown to be self-defeating as well as immoral.”

And again: “But the society that follows should not be what it was before. We won’t properly absorb the lessons from the coronavirus crisis if we fall back into the traditional Republican and Democratic model of politics. We need a new vision to create a more resilient economy.”

We may not be seeing this type of rhetoric coming from conservative politicians in Australia yet but, if Australia follows America’s lead – as we typically do in most things – we can presumably (and hopefully) look forward to a similar modification of the local neoliberal political dogma and consequent economic policy. After all, who would ever have expected to hear Scott Morrison say: “It is no longer a matter of entitlement, it is a matter of need” as he announced a doubling of Australia’s much-criticised Newstart Allowance for the (temporarily?) unemployed?

We can but hope that we will eventually see some moderation of the harsher aspects of conservative economic thinking and policies post-pandemic. 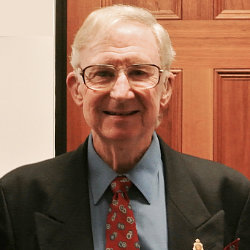 Ray Bricknell is a retired project management consultant who now tutors classes in Current Affairs and Macroeconomics at the University of the Third Age, Brisbane.