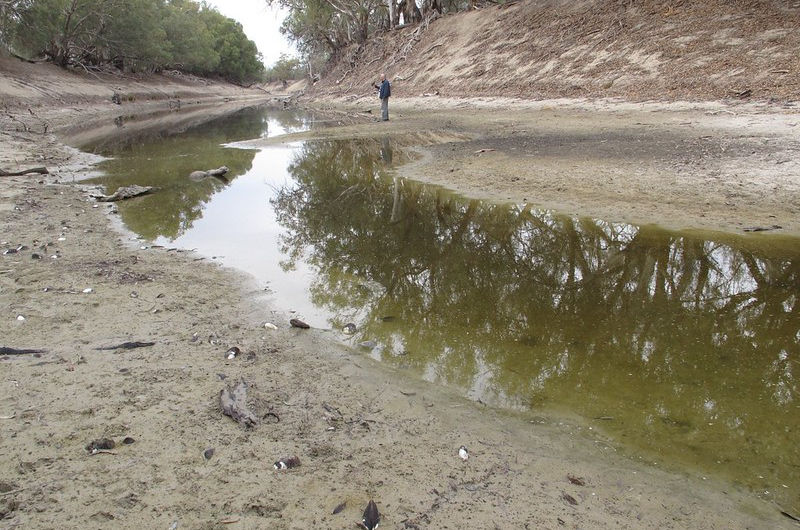 After nearly ten years of the Murray Darling Basin Plan, implemented to ensure the river remains viable, there is overwhelming evidence that the Plan is ineffective and should be replaced.

In 2012 scientific evidence cast significant doubt on the river’s health and sustainability from too much water extraction imposed on a river already subjected to the loss of its normal restorative flooding cycles because of increasing droughts and capture of water in Dams. Consequently the entire ecological system of the river and floodplains was declining.

To sustain the integrity of the drying river system, CSIRO modelling which recommended that the river required 4-7 thousand billion litres of environmental water by 2024 was the crux of the Plan. Today, Review of the government’s “Water for the Environment Special Account” finds that only 0.5% has been delivered.

Measures to secure some water for the environment such as water buybacks and efficiency management have been far from successful.

In the view of Richard Beasley, Senior Counsel in the 2019 South Australian Murray-Darling Basin Royal Commission indicates “The drafting and enactment of the Basin Plan is a tale of political interference, scientific censorship and deception, heavy pressure from lobbyists, bureaucratic cowardice, and the general bastardry of what “Canberra” generally does when it comes to the environment. In the view of Professor Richard Kingsford, a scientific expert on river systems “the Murray-Darling Basin Plan hasn’t met its promise to our precious rivers”.

The fundamental reasons for this debacle are; a failure by government and states to understand the scientific basis of a living river, manipulation or malfeasance in the allocation of water including the use and abuse of a water market, and the abject failure to consider the needs of Indigenous people.

These three issues will be examined in the current article.

Unfortunately little national or political understanding has developed on the sustainability of rivers and many are now threatened as detailed in the recent State of the Environment report. This ignorance is displayed in recurring political statements on rivers for example a Premier’s recent ‘People before Plants’ statement to raise the Warragamba River Dam wall.

Yes, a commitment to examining emergency measures was necessary but ‘People before Plants’ ignores the fundamental problem of a lack of future planning for the certain eventualities of more floods; it disregards the World Heritage listing of the Blue Mountains National Park, its species and ecology so vital to its survival, it dismisses significant Aboriginal cultural heritage, and ignores vital discussion over population policy particularly in relation to booming urban development.

The ‘People before Plants’ statement epitomises the knee-jerk response by politicians in both drought and flood- more dams. They may well become the defining words for the failing water management of governments.

A fundamental flaw in current management is that water markets could play a part of maintaining a healthy river.

The ACCC report, Murray-Darling Basin water markets inquiry, states “Basin water markets are critical to the efficiency and productivity of Australian agriculture”. This puts the cart(el) before the horse. The horse is ‘water’ and not ‘water markets’. Some would see water markets as the delivery of a neoliberal fantasy to manage a life support system for humans and all species. Financial markets operate on a philosophy of greed is good, and on clever manipulations and require extensive regulation to prevent environmental damage. What next? Are markets to colonise clean air?

The ACCC reports the benefits and also significant deficiencies in current water trading arrangements, but then the river has deteriorated even whilst productivity has been slightly improved by using a massive amount of environmental water. In effect this water has been stolen, rorted or mismanaged as detailed by the Australian Institute and others. The involvement of some Ministers and private interests could well be considered by the new Integrity Commission.

Perhaps the greatest failure in this year of the Voice has been the neglect of Indigenous needs for water by governments and water markets. This was explained in the 2020 Submission to the “Inquiry into the National Water Reform from the Northern Basin Aboriginal Nations”. It is important that their words are quoted in full for they display an understanding lacking in our governments.

In their communities they state that “unemployment, child mortality and other negative health conditions are disproportionately experienced by indigenous people. Our health and well being are intrinsically connected to the health of our country, including its waterways, therefore, the decline of the river basin and its ecosystems due to drought, climate change and the over allocation of water for industry is of extreme concern”.

“We have been the Traditional owners of the Basin for over 30 000 years. Whilst our involvement in the management of water is essential for our physical, spiritual, cultural, environmental, social and economic health, our potential to do this has been hindered in recent decades by our relative lack of water license holdings. Nearly 10% of the population of the Murray Darling Basin area in NSW are First Nations people; however, our Nations and organisations legally only hold 0.2% of the available surface water”

“This is due to a historical series of water trading policies and laws that have compounded to limit the opportunities for First Nations People to gain legal entitlements to water. Not only does this impinge on our ability to take care of water on our lands, but it also denies us the same opportunities as other stakeholders to participate in the Basin’s AUD16.5 billion water market”.

They called for “a review of current water laws and licensing and the
exploration of new options for water license redistribution programs that
enable First Nations peoples to achieve their social, economic, cultural and
environmental goals with respect to water”

Their understanding was innately ecological with the identification of indicator species and sites of importance which we they wished to see supported using water for the environment. This created the conditions that allowed sustainability of the system for 30,00O years.

The meeting of five state environment ministers with Minister Plibersec on October 12 2022 considered the failure to deliver environmental water, and they agreed to move belatedly towards the agreed target of 2024. This may be possible to some extent after recent rains but is poor consolation for failure to deliver over 10 years when river flows were inadequate. Nor can future environmental water be relied upon when changes in national governments may give it little importance. The current governance system has been politically eroded. Whilst Minister Plibersec should continue her pressure for delivery of environmental water she would be wise to commence now to consider alternatives to the present Plan. Clearly a truly Independent Authority with expertise in water science and technology, climate change, ecology and legal enforcement is needed.

The ANU Institute for Water Futures supports an Independent Statutory Authority that would be responsible for strategic leadership and support Australian governments to drive national water reform under a refreshed National Water Initiative. A reformed Independent Authority for the Basin could be within this framework.