GIDEON LEVY. ‘Being Black in America Shouldn’t Be a Death Sentence.’ What About Being Palestinian? (HAARETZ 30.5.20)

Did you see the American police officers? Did you see how they choked George Floyd to death in Minneapolis?

Did you see Officer Derek Chauvin kneeling on his neck, pinning him down, with Floyd begging for his life until he died five minutes later? What racist police forces they have in America, how brutal. Now Minneapolis is burning after a black citizen was executed because of his skin color. The mayor apologized, the four officers involved were fired, Chauvin was indicted. America is a cruel place for black people and its police are racist. 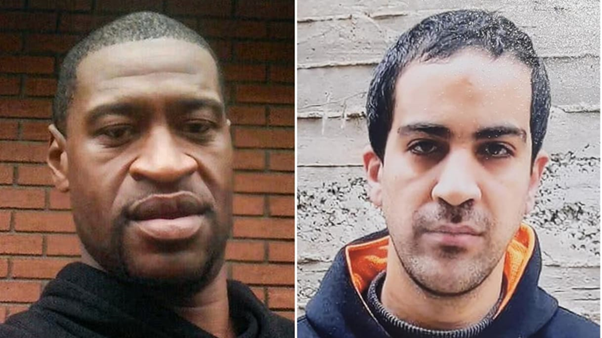 A few days after Minneapolis, on Saturday morning, in Jerusalem’s Old City, Eyad Hallaq, a 32-year-old autistic man, was on his way to the Elwyn Center for disabled people. Border Police officers claimed they believed he was holding a gun – there was none – and when they called out for him to stop, he started running. The penalty was death. The Border Police, the most brutal of all units, knows no other way to overpower a fleeing autistic Palestinian except to execute him. The cowardly Border Police officers fired some 10 bullets into Hallaq as he fled, until he died. That’s how they always act. That’s what they’ve been trained to do.

The Israel Defense Forces and the Border Police have a special weakness for the disabled. The slightest wrong movement or sound could sentence them to death. In another Old City, of Hebron in March 2018, soldiers killed 24-year-old Mohammad Jabari, who was mute and mentally ill, and whose neighbors called him “Aha-Aha” because those were the only syllables he could say. They ambushed and shot him near a girls’ school, claiming he was throwing stones. He left behind a 4-year-old son, an orphan.

The nickname for another young man, Mohammad Habali, was Za’atar (hyssop); nobody knows why. He was also mentally ill and used to walk around with a stick. Israeli soldiers executed him by shooting him in the head from about 80 meters away. That happened in December 2018 opposite the Sabah Restaurant in Tul Karm, just after 2 A.M., while he was moving away from the soldiers and the street was quiet.

Two years earlier the army killed 23-year-old, mentally disabled Arif Jaradat, in the town of Sa’ir. His family called him Khub, which means love. Whenever he saw soldiers he would shout at them in Arabic, “Not my brother Mohammed.” He meant to say, “Don’t take my brother Mohammed.” Mohammed, Arif’s older brother, was abducted from his home and arrested at least five times by soldiers right in front of him. On the day Arif died they heard him shouting his usual cry at the soldiers. “He’s disabled, don’t shoot him,” somebody managed to shout at the soldiers, but they didn’t care. They shot Khub to death too.

None of these unfortunate mentally disabled people were endangering the soldiers or the Border Police personnel at all. The autistic Hallaq wasn’t endangering anyone either. The Border Police officers shot him because that’s how they do things. They did it because he was a Palestinian and because live fire is the first and preferred option of the occupation forces.

The Border Police are no less brutal or racist than the police in the United States. There, they shoot black people, whose blood is cheap, and in Israel they shoot Palestinians, whose blood is even cheaper. But here, the killing puts us to sleep; there it sparks protest. The mayor of Minneapolis, Jacob Frey, who happens to be Jewish, was quick to apologize to the black community of his city. “Being black in America should not be a death sentence,” he said.

Neither should being a Palestinian be a death sentence, but no Jewish Israeli mayor ever said anything like that. The police officer who choked Floyd to death was charged with third-degree murder, his colleagues were fired. In Israel, the department in the Justice Ministry that investigates police misconduct is investigating the officer who shot Hallaq. The end, as in all other cases like it, is known.

Meanwhile, in America, the police are brutal and racist.