If you can’t beat ‘em, join ‘em. How will a coronavirus-led recession affect CO2 emissions? Will health improve from cleaner air with fewer vehicles on the road? How can governments use stimulus packages to protect the vulnerable and hasten the transition to a low carbon, environmentally sustainable, just world? And good news for Torres Strait Islanders: $25m to cope with sea level rise.

A few weeks ago a reader politely suggested that I leaven my servings of bad news at breakfast, lunch and dinner with the occasional good news story. The truth is, dear reader, that I really don’t see much unequivocally good environmental news. What there is usually relates to something that is progressing in the right direction but far far too slowly to prevent a catastrophe (the growth of renewable, for instance) or to some much-abused species that has been temporarily saved from oblivion. However, I suppose we could say that news that energy-related carbon dioxide emissions did not increase during 2019 is relatively good, and we can hope that unlike 2013-16 it isn’t a false dawn. But, sorry reader, just can’t help myself, I would ask you to note two caveats to my glee: emissions increased in the developing economies, mainly in Asia, which are the ones that need access to more energy in the coming years; and the flat line between 2018 and 2019 was due to reduced emissions only in the electricity generating sector. 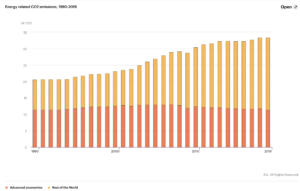 The financial pundits seem confident that coronavirus will spark a global economic recession. If so, will carbon dioxide emissions fall? Logically, yes, and current evidence from China is that emissions fell about 25% in the first couple of months of 2020, but past experience indicates that recession-related falls are only temporary, with no real change to the shape of the graph. 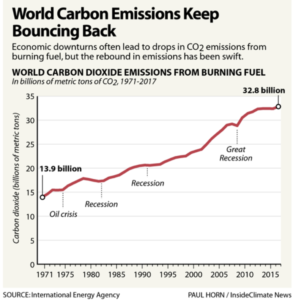 The crucial question though is whether the big bucks that are being thrown by governments around the world at preventing a recession can be directed to, for example, forcing the pace of the transition from fossil fuels to renewables, preventing further degradation of land and marine ecosystems and making the world’s agricultural and transport systems more environmentally sustainable. Fatih Birol, Executive Director of the International Energy Agency, recently stated: ‘Large-scale investment to boost the development, deployment and integration of clean energy technologies – such as solar, wind, hydrogen, batteries and carbon capture (CCUS) – should be a central part of governments’ plans because it will bring the twin benefits of stimulating economies and accelerating clean energy transitions.’ Interesting development for an organisation that started in 1974 as a club of elite nations with a strong interest in fossil fuels.

It seems Mr Birol is on the money though. According to New Climate Economy, low carbon climate-resilient growth can provide lasting economic and social benefits including US$26 trillion in net global economic benefits between now and 2030 compared with business-as-usual and the creation of 65 million low carbon jobs by 2030. The last thing that is needed is pouring public money into high carbon, environmentally destructive infrastructure projects (particularly any that increase air pollution) just because the plans for them are already sitting on the minister’s shelf. Sensible government investments will also send the right message to private investors.

The plummeting of air pollution when there are fewer vehicles on the roads is well demonstrated in these city maps from the USA. Forget La La Land rush-hour snarl ups, coronavirus has emptied LA’s freeways.  The reduced air pollution will have tremendous health benefits of course, but a recession will probably have adverse health consequences such as more suicides and more poverty and its related health problems. I am not agreeing with Trump that we should just let coronavirus run wild but there is an empirical question to be answered at some stage: how do the health effects of an uncontrolled coronavirus epidemic compare with those of an economic recession?

And talking of poor and disadvantaged people, we have to remember that they suffer in multiple ways in all this: they reap the least of society’s benefits in the good times; they suffer the most during a recession; and they are the biggest and earliest victims of climate change, having done the least to cause the problem. Wise governments will ensure that their stimulus packages are used both to protect existing disadvantaged people and communities and to  invest in programs that ensure a just transition to a green economy.

Finally, yes, a bit of good news. The Australian and Queensland governments have promised $25 million to help Torres Strait Islanders implement adaptations needed to cope with rising sea levels: building sea walls, repairing jetties and re-establishing ferry services. This follows the initiation of a complaint to the UN Human Rights Committee by a group of Islanders alleging that Australian government inaction on climate change violates their human rights. The Islanders want greater climate action from the government to protect their homes and funds for coastal defences. 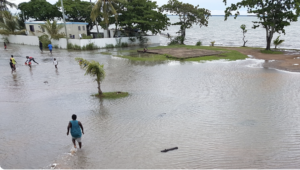