Tamed estate: “And on the second day, he said: ‘Let it be forgotten,’ and it was.”

The federal Coalition’s PR team clearly forgot the Streisand effect: the phenomenon whereby attempts to suppress information lead to far greater exposure than the information would have generated intrinsically.

And on the second day, he said “let it be forgotten”. And the media obliged.

Rarely does a Four Corners episode generate as much excitement as Monday’s. The Coalition’s PR team clearly forgot the Streisand effect: the phenomenon whereby attempts to suppress information lead to far greater exposure than the information would have generated intrinsically. The “extraordinary pressure” from the government not to air the program meant eyes across Australia were glued to the ABC at 8.30pm on Monday.

The report focused on the long history of Christian Porter’s sexism and misogyny.

The media was quick to rush to Porter’s defence. He was a “young man”, in his “late teens” (the most egregious examples of Porter’s misogyny occurred when he was in his mid to late 20s). I must be a pretty boring guy, because I’m younger than he was when he was wandering the streets of Perth vomiting into a plastic bag on his wrist, and I really don’t see the appeal.

It was a “caricature”, a character assassination. There’s a reason many work places have  rules against relationships with subordinates – profound power imbalances and all that.

The Australian’s Paul Kelly, on Q&A, dug in, saying that the ABC’s report on the two federal ministers was not in the public interest. 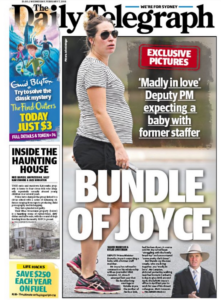 However, he maintained that plastering a picture of a  pregnant Vikki Campion, carrying Barnaby Joyce’s baby, across the front page of the Daily Telegraph was a “different situation”, and that “of course” it was worthy of winning an award.

One story about an affair between a Coalition minister and a staffer; another about a Coalition minister reportedly seen kissing and cuddling with a staffer of another Cabinet minister. It’s not entirely clear which criteria meant that only one of the stories was in the public interest and deserving of a journalism award.

Joe Hildebrand described it as “cheap and trashy reality TV”, perhaps forgetting he works for The Daily Telegraph, which published the article about Vikki Campion.

Luckily for the Coalition and ministers Tudge and Porter, the press moved on quickly to the next story – Joel Fitzgibbon quitting the backbench. A much bigger story than the Attorney-General reportedly putting himself in a compromising position.

… and what they didn’t say

Often, it’s as much about what the Tamed Estate doesn’t say as what it does.

A Michael West Media report revealed that Christian Porter had been in breach of the law since his appointment to the position of Attorney-General, by failing to publish the required annual reports documenting his use of National Security Information orders three years in a row. But no mention of this found its way into the mainstream media.

This is a story of huge public interest. State laws banning donations from property developers were brought in for very good reason, as numerous hearings of NSW’s Independent Commission against Corruption can attest – envelopes stuffed with $10,000 cash handed over in the back of a Bentley just one example.

The federal government finds itself mired in a land scandal, the Leppington Triangle, where the government bought the parcel of land from a Liberal Party donor for 10 times its actual value. Weakening political donation laws serves just one purpose and one purpose only; to make donations from property developers easier to obscure. What a dangerous move by the two big political parties.

So who reported it? Naturally, given this is a story that opens the door to corruption, the nation’s most esteemed publications were lining up to air the news. The Conversation; MacroBusiness; The New Daily; and Michael West Media. As for The Australian? The Age? The Sydney Morning Herald? Not a peep. 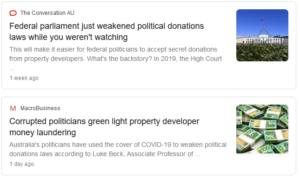 These events – rapidly becoming a pattern – speak to an insidious issue inside “the Canberra bubble”. Christian Porter – at a time when he was being touted as the next federal Attorney-General – was reportedly putting himself in a position that compromised national security. It happened in a public bar – the Public Bar, where politicians, staffers, journalists and all sorts of hangers on reportedly congregate. How did this not make the front page of papers all over the country?

The incestuous relationship between journalists and politicians lends itself to erring on the side of under-reporting. Annoy the wrong people, and you don’t get drops. Report an unflattering angle; you’re out of the picture.

The need for media diversity has never been higher, and the more than 500,000 Australians who signed Kevin Rudd’s petition agree, no matter how The Australian’s Paul Kelly and Chris Kenny try to reduce it to two disgruntled ex-PMs who felt their political career fell short.

But the attempts to discredit the validity of the petition are growing desperate, with Peta Credlin on Sky News claiming that the petition – on Federal Parliament’s own website – was actually a data harvesting exercise and that all signatories would soon be “bombarded with left-wing propaganda”.

Not content with the disagreement he had on Q & A with historian Professor Jenny Hocking regarding Gough Whitlam’s dismissal and the palace letters, Paul Kelly was promoting the obvious truth, describing Malcolm Turnbull as lacking rationality because he disagreed with Kelly. It was a busy week for him, as he also promoted his schtick unchallenged on ABC’s 7.30. 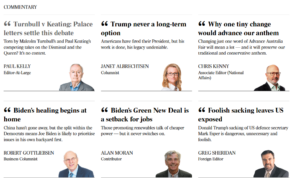 The Australian described the extension of JobSeeker payments as a “lifeline” – with the announcement coming soon after the Four Corners report. Just a friendly reminder – the  overwhelming majority of experts have argued that the cut to the coronavirus supplement back in September has slowed the economic recovery. But hey, got to get back in the black somehow. 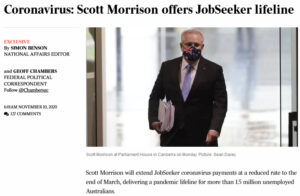