Tamed Estate: News’ and Nine’s PR and the plight of the (Liberals’?) media

Old media caps off annus horribilis 2020 with its traditional horrible week. Michael West, standing in for Michael Tanner, looks at the fall of Fairfax, PR masquerading as journalism, who guards the Guardian, Seven News’ calls for war with China and how Scott Morrison’s media team has the game sown up.

How about Independent. Sometimes.

As annus horribilis 2020 shudders to its Covid-ridden close, the once venerable Australian media properties, the Sydney Morning Herald and The Age, have spruced up their advertising.

We refer not to their advertising for the Liberal Party, or even the heavy editorial influence of their beloved corporate sponsors, but rather the advertising of their own unseemly decline.

The shining example of the week was this Op-ed piece penned by a Liberal Party PR person and lobbyist Parnell Palme McGuinness. Your humble essayist was once, long ago, a cadet at Fairfax – now Nine Entertainment. Reading this slavering panegyric to Gladys Berejiklian, which kicked off with a gratuitous swipe at Jacinda Adern, approximated the feeling one gets when scraping one’s fingernails across a blackboard.

It wasn’t just the tacky story. More the creepy incursion of political PR people into what purports to be independent journalism.

Since when is it de rigueur for a media organisation to run propaganda clickbait by Liberal lobbyists who benefit from limited-tender contracts from the Liberal Government? Answer: since Fairfax (now Nine newspapers) installed Liberal editorial management.

To be fair, the decline has been afoot for more than a decade – well before the Nine Entertainment takeover. And many fine journalists remain there – albeit cowed and interfered with – and feeble management and the global decline of a business model are largely to blame. Still …

Two days later, The Age sallied forth with a piece by a sociology professor who writes for The Australian and Quadrant claiming Dan Andrews was “heading the most incompetent Australian administration in living memory”. Putting Betoota Advocate to the sword

This bloke must have a very short living memory. Incompetence is endemic to government and there are plenty worse than Dan Andrews.

If the basic task of a media organisation is to hold both sides of politics to account, particularly the side in government, most of the mainstream media in this country has failed miserably.

Rupert Murdoch’s News Corp gave it up long ago. The Australian, the state tabloids and Sky News are little more than agitprop – their daily daggy a capellas to government merely the thing of a propaganda machine to further the power and financial interests of a US billionaire.

And although still insisting forlornly it is independent, still touting the “Independent. Always.” slogan on its mastheads, replete with emphatic full stops, Fairfax has now joined the choir; the shrill descants of the News Corp sopranos ringing above the melodic Fairfax bass, all perfectly complemented by the altos of talk-back radio and the reliable tenors of commercial TV – together as one – singing the praises of the most corrupt government in Australian history.

Independent. Always.? What a clear breach this is of Trade Practices law; truth in advertising, if anybody could be bothered to prosecute the case.

The ACCC recently fined an egg producer $300,000, finding it had falsely labelled eggs as free range. “The Federal Court agreed with the ACCC, finding as a matter of fact not all chickens were free to roam.”

Are News chairman Rupert Murdoch and Nine chairman Peter Costello’s chickens free to roam? Not on your nelly. They are well and truly caged, their raison d’etre is to give birth to government propaganda and, in so doing, to attract financial favours from the gamekeepers of the Morrison poultry farm.

And they do it with precision. Cluck, cluck.

So it is that the ACCC is busy kowtowing to the Government, fruitlessly compelling Google and Facebook to make “content” payments to News and Nine (when the digital giants actually provide free advertising already, drawing eyeballs to the paywalls of The Australian and the Sydney Morning Herald so consumers can subscribe to read the propaganda. And OK, to be fair, some journalism too, nicely arranged to suit the broader corporate and political agendas.

So it is that the chooks cluck and the favours are dispensed: licence free relief, reprieve from network transmission costs, government intervention against Google and Facebook, regulatory inertia, bullying the ABC into submission and self-censorship, untendered and unexplained cash payments to Foxtel, the large rural newspaper subsidy schemes followed by the closure and sale of same newspapers, laws changed to allow Nine to take out Fairfax and further concentrate the shallow pool that is Australian media.

By changing the law to allow Nine to take over Fairfax, former Minister for Communications Mitch Fifield did a big favour for his government, as well as News, Nine and Fairfax.

Now “Mitchell Peter Fifield is the Permanent Representative of Australia to the United Nations”. Thanks Mitch, job well done – for the Coalition, which relies on an obsequious and beaten Fourth Estate to stay in power.

It is a symbiotic relationship to be sure; a marriage counsellor would call it co-dependent. So tightly in the clutches of Murdoch is Mitch’s successor, Paul Fletcher, that he and his office can’t, or wont’, answer questions about where Rupert Murdoch has taken control of Foxtel.

Elsewhere, Fletcher was busy harassing anybody at ABC who would listen, even browbeating chairman Ita Buttrose over the Four Corners episode, which exposed a couple of ministers for engaging in the act of extra-marital canoodling.

All this punctilious intervention and regulatory fussing over nothing while Rupert, the world’s dominant media mogul, took his government grants and scurried off to Delaware with Foxtel. To the sound of crickets from Fletcher and ACMA.

Where will it all go this year? What will the Government do to protect its machinery of public relations? If the trend is any indication, mainstream media will get even closer to governments and their corporate sponsors. It will get worse.

The formula is simple: you tickle my feathers, I’ll tickle yours.

Who guards the Guardian?

The atrophy in editorial standards at Nine is not new. It was well under way 10 years ago, and made worse by strategic incompetence.

As they careened – like drunks at the country dance – from left to lefter then right, left again, then further right, Fairfax management handed an entire market to the Guardian. On a platter.

Guardian Australia, which started with little more than the backing of a $2 billion UK trust and a local billionaire, had a simple formula: do journalism.

So it poached a few top journos from Fairfax and, with a fraction of the staff, denuded the bumbling Fairfax of its large, wealthy and intelligent customer base, rusted-on over a century.

Doing journalism was an old-fashioned formula that seemed to take Fairfax by surprise. As its new, even more hopeless and sycophantic, editorial leadership under Nine tripped over themselves firing journalists such as Michael Pascoe, Peter Martin and yours truly and replacing them with pro-business toadies from News Corp, devising new ways to kowtow to governments and corporations, the biggest winner has been The Guardian.

How could Fairfax management have possibly thought it was a good idea to jerk back to the right ideologically, leave its progressive readership to be devoured by the Guardian, and compete against the right-wing might of News Corp? There is only one logical explanation, and we are merely surmising here (incompetence and ideology are contenders), and that is they did it to solicit the attentions of the conservative government and the advertising revenues from its large corporate donors, sponsors and – as the Financial Review literally, we kid you not, calls it … “Team Australia”.

In any case, the Guardian had its hiccup this week on social media. It was nothing in the league of Seven News, whose 6pm bulletin warned we were going to be attacked by China. Not only did they cite Jim Molan as an “expert source” but also some guy from ASPI; that’s the Australian Strategic Policy Institute, an outfit funded by US weapons manufacturers, and the US and Australian governments. (It would be good to see the gun-shy ABC disclose ASPI’s massive conflicts of interest, too, given that it quotes ASPI so often.) 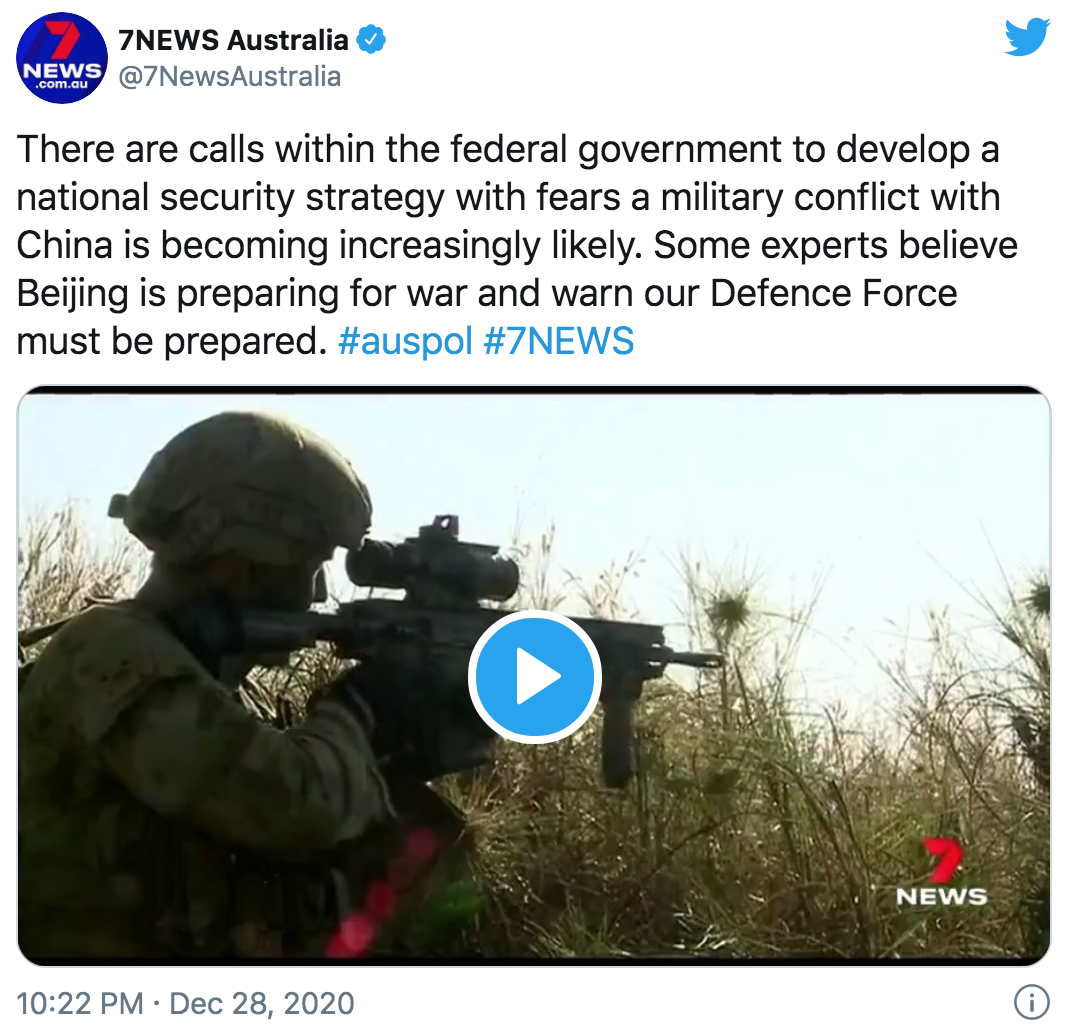 But to the Guardian and its maturing. Success has its own pitfalls and the rise of Guardian Australia has brought much praise and, lately, some condemnation from the left. It boiled over on Twitter this week when political correspondent Katharine Murphy ran a simple news item quoting in-house polling.

“But for mine, the real miracle happened in 2020, during one of the most difficult years that many of us have experienced. That miracle was the return of trust to Australia’s political system,” wrote Murphy of the latest Essential poll. It was a straight story, a boring report about a quintessentially unessential poll that presumably reported the findings in good faith.

Yet she was hammered on Twitter. It may well be the case that there was some polling uptick in trust compared with some previously nebulous metric dreamed up by a pollster. The fact is, however, that government has never been so corrupt in Australia, corrupted by corporate money. And the level of accountability of our elected representatives has never been so low.

The pandemic has accelerated inequality and corporate domination, the federal government has accelerated its control of the media, and Guardian Australia, now making profits, is very much in the mainstream, very much on Scott Morrison’s “drops” list – the exclusive Canberra Bubble Club of mainstream media correspondents who are briefed in advance on government announcements … before all the facts, with little time to write, think or call.

This is tricky turf now for the Guardian.

Do they tell the PM’s office, no, please don’t give us the scoop; we prefer to report it independently the next day – fully apprised of the detail of the latest policy? Or do they tread the tightrope? Behind the scenes there are personal and business factors: assorted political relationships, political and corporate advertising to consider, perhaps an application for charitable status that has to navigate a Liberal-led ACNC charities commission.