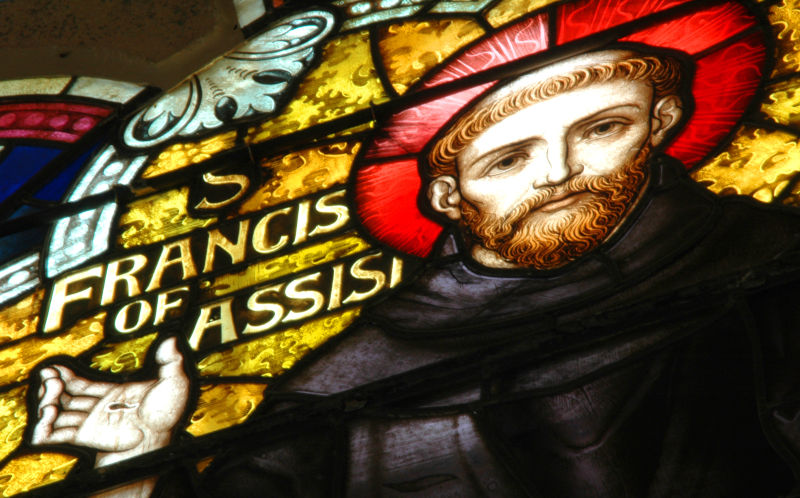 I’ve just spent a week in Assisi – the home of Christmas cribs. At every turn there was a nativity scene – large and small, tasteful and kitsch, prayerful and gauche. By night, church facades were lit with truly spectacular scenes of Mary and the angel at the Annunciation and of the manger with Joseph, Mary and the infant Jesus.

Christmas carols, religious and secular, mostly in English, played on all the main thoroughfares. The weather was perfect – crisp and slightly bracing, with fog often covering the valley below for the whole day. One evening, I went for vespers at San Damiano the location of the little Chapel where Francis would frequently visit at the beginning of his conversion. This is where he heard the words: ‘Francis, go and restore my house that is falling in ruins’. He sold his belongings, defied his father, and bought all that was needed to repair the church. St Clare lived there for 40 years. This is where the sick and tired Saint Francis rested and composed the Canticle of the Creatures.

One afternoon I made the trek up to Eremo Delle Carceri, the Hermitage. 800 metres above sea level, this is where Francis and his companions often came to meditate. Oak trees where tradition has it, the birds nested and listened to Francis’ words. Saint Francis’ cave is where he often slept and meditated. At dusk the sunset was a serene blood red. I could see why Francis liked being here.

There was mass in the Chapel of the Crucifixion in the Church of St Clare. This is where the original cross which inspired Francis now hangs. The singing of the enclosed Poor Clare sisters was angelic. I visited the tomb of St Francis where our Pope Francis went to promulgate his last encyclical two years ago. He commenced that encyclical with these words:

‘“Fratelli Tutti’. With these words, Saint Francis of Assisi addressed his brothers and sisters and proposed to them a way of life marked by the flavour of the Gospel. Of the counsels Francis offered, I would like to select the one in which he calls for a love that transcends the barriers of geography and distance, and declares blessed all those who love their brother “as much when he is far away from him as when he is with him”. In his simple and direct way, Saint Francis expressed the essence of a fraternal openness that allows us to acknowledge, appreciate and love each person, regardless of physical proximity, regardless of where he or she was born or lives.’

This message of universal love for those near and far, for those likeable and not, for those like us and not, seemed realisable there at the tomb of St Francis. Three months ago, Pope Francis met with a large gathering of young people in Assisi and he told them: ‘You are called to become artisans and builders of our common home, a common home that “is falling into ruin”. Today, a new economy inspired by Francis of Assisi can and must become an economy of friendship with the earth and an economy of peace. It is a question of transforming an economy that kills into an economy of life, in all its aspects. That “good life” is not the sweet life or living it well, no. Good living is the mysticism that the indigenous peoples teach us to have in relation to the earth.’

The romantic Christmas images, the challenges of St Francis as translated by Pope Francis, and the crisp clear winter days had me alive to the Christmas promise of the prophet Isaiah: ‘The people who walked in darkness have seen a great light; upon those who dwelt in the land of gloom a light has shone.’

The message of Christmas is not that the darkness of our world has been definitively overcome here and now. It’s not that the birth of Jesus 2,000 years ago put an end to evil, darkness, suffering and death. No Christian who takes the world seriously, or who feels acutely the suffering of loved ones, or who confronts their own diminishment and mortality could seriously entertain such a thought. Think only of the ongoing war in Ukraine, or those periodic acts not only of violence and hatred, but of pure evil. While I was immersed in the peace of Assisi, Queensland police officers, their families and loved ones were enduring the horror of the Wieambilla shootout in which two young police officers just doing their job were lured to their deaths by three individuals possessed by evil conspiracy theories, while one of their neighbours being the Good Samaritan was also gunned down in cold blood. To think that two of the killers had been, until recently, teachers of school children.

At the memorial service, the slain Constable Rachel McCrow was described by one of her colleagues: ‘She was one of a kind, she could simply light up any room on the darkest of days’. In the presence of our national and state leaders, a police officer read the police ode: ‘As the sun surely sets, dawn will see it arise’.

This Christmas, as with every Christmas, there will still be darkness in our world. And the sun will set. But for us Christians, the birth of the child Jesus is a light which always shines even in the darkest recesses of the human heart. He is the promised new dawn sustaining our hope.

For every boot that tramped in battle,
every cloak rolled in blood,
will be burned as fuel for flames.
For a child is born to us, a son is given us;
upon his shoulder dominion rests.
They name him Wonder-Counselor, God-Hero,
Father-Forever, Prince of Peace.
His dominion is vast
and forever peaceful,
from David’s throne, and over his kingdom,
which he confirms and sustains
by judgment and justice,
both now and forever.

On this, my first Christmas without my parents, I wish every family peace and good tidings.