A continuing pandemic puts more than economic recovery at risk 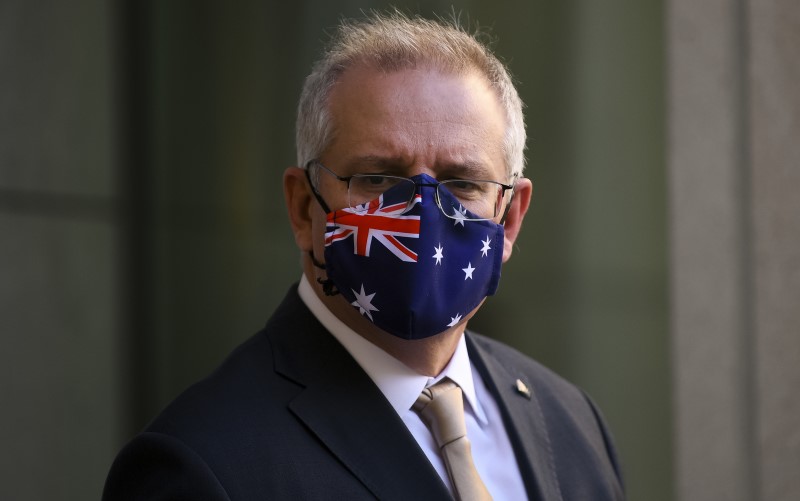 Prime Minister Scott Morrison has failed again and again in his handling of the pandemic. (Image: AAP/Lukas Coch)

One cannot pretend that Morrison has been unaware of both the health and political risks. His apparent policy paralysis therefore seems inexplicable.

Treasury financial forecasts show that Scott Morrison has put aside tens of billions for an election war-chest — for decisions made but not yet announced. A good deal of this will involve the sort of corrupt pork-barrelling that has become a hallmark of the Morrison style, but other substantial sums will be devoted to particular middle-class groups seen as primary constituencies of the Coalition, or to interests, such as the fossil fuel lobby given to continual demands for the further appropriation of public resources into their profit and loss accounts.

Whether there is to be a Budget before the election is still not clear, but one can be certain that no opportunity to announce new policy and programs will be missed.

Beyond this, the “ordinary business of government” requires — and has more or less been promised — substantial public investment in aged care, in disability care, and in mental health care. No doubt Morrison wants some signature announcement on violence against women, and about toxic workplace cultures, as well as further announcements on climate change, the environment, defence and Indigenous affairs, particularly on the question  of whether and how Aboriginal opinion can be heard in national policymaking.

And Morrison continues to signal that he has an agenda on the right of religious groups to discriminate against others, and on a low-rent tiny-impact anti-corruption organisation.

The past two years have shown the capacity of the pandemic to derail smooth planning and expectations.  They have also shown that bold plans to assimilate the virus and to ignore its impact in vulnerable communities can be destroyed if new forms of the virus get out of control.  All the more so at a time when many of Morrison’s hopes and expectations are based on the notion that infected people without symptoms, or only mild symptoms, can live harmlessly in the community without challenging the economic revival.

The big problem with that theory is that such people have the capacity to create an enormous reservoir of disease, initially unmonitored by the public health system, and well capable of flaring up into serious cases and deaths. Australia does not want the Omicron bushfire to die out of its own accord. We want it doused, not left with continually smouldering coals on its fringes.

For all of his dilly-dallying, one can hardly pretend that Morrison has been unaware of the risks, whether to the health of Australians or the fortunes of the Coalition. It’s what has made his apparent policy paralysis seem inexplicable or fatalistic.

His own officials and ministers, as much as state premiers, and leaders and officials all over the world were telling him a month ago that the arrival of the Omicron variant of the coronavirus from southern Africa had changed the nature of the pandemic. It was just as, about a year ago, the arrival of the Delta variant, had transformed a good deal of the acquired experience of coronavirus management, including what was understood about infectivity, how the disease was passed from person to person, and, probably, the effectiveness of vaccines in preventing infection, even as it still seemed to moderate its impact among those who caught it.

Morrison himself was among the first to announce that Delta was a game-changer, which would force government, including premiers and chief ministers, to review their strategies. He had to; the different patterns of Delta were among the reasons he invoked to explain some of the delays, miscalculations, and general mistakes  of the vaccine rollout, supply shortages, and tactical stuff-ups that so characterised public health action against the virus in 2021.

It was a part of his pattern of blame-shifting, indeed of blaming everyone but himself for a very slow start to mass vaccinations, for delays in reaching any sort of point in which herd immunity was supposed to occur. It was responsible for decisions about excluding non-white Australians from repatriation flights, and for the impatience and disbelief with which virtually everyone — apart from his acolytes in the Murdoch media — greeted his every announcement it was nearly time for freedom from any public health controls.

Later it was a stick with which to beat premiers, particularly of Western Australia, Victoria and Queensland — the Labor states in short — for their alleged failures over lockdowns, border closures, and vaccination rates. Who could blame him for not anticipating how bad things could get when Delta was a mutation rather than the thing itself, when it spread at rates and probably by methods that had not been the case earlier, and had upset all of the calculations that he, his ministers and his tame advisers, especially but not exclusively out of the health bureaucracy, had initially advised?

And later still it was a part of his explanation for why laissez-faire lockdowns, of the sort practised in NSW by former premier Gladys Berejiklian, were so unsuccessful in restraining and containing the virus — indeed seemed to spread it all over the nation, including in states which had attempted more professional containment methods. By now, of course, Morrison had convinced himself that most of the population was now entirely immune from the virus thanks to nearly universal vaccinations, and that the time had arrived at which we had to “learn to live” with any remaining morbidity — and even smaller mortality — that occurred, mostly among those foolish enough to refuse vaccination.

Morrison has, by now, virtually surrendered to the states leadership of the practical fight against the pandemic, even as he has been trying, rhetorically at least, to have a response where there is agreement about trigger points, and some general unity of purpose. He has remained spiteful about border controls and closures, but it is an argument he does not seem to be winning, despite the applause of News.com organs.

He clearly has at least some glimmer of understanding that Omicron — a new mutation, and one apparently much more infectious if not, apparently as likely to cause serious illness — involves a need for a new focused and careful attack, without assumptions based on past behaviour. It is impossible, however, to describe his response — or that of NSW Premier Dominic Perrottet as responsible, measured, or evidence-based.

Based on what we are seeing, it has to be asked whether he has the courage, or the imagination to win this one.