A curate’s egg: measuring the successes of Australia’s vaccine rollout 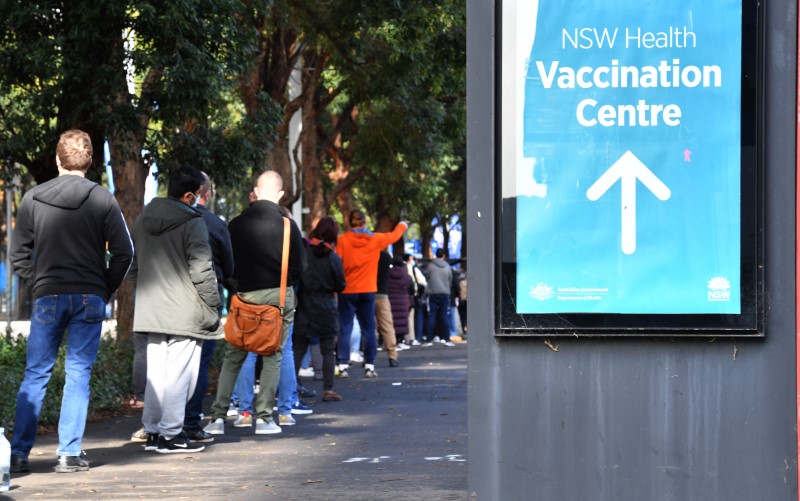 Australia can prepare for the next pandemic by learning from its COVID-19 mistakes. (Image: AAP/Mick Tsikas)

Against the odds, Australia’s vaccine rollout has been largely successful. In the first part of a two-part article, Robin Boyle reviews what worked.

Australia is well on track for a remarkable vaccination uptake. Assuming we survive the new Omicron variant, by the end of 2021 most of the population will have returned to a reasonably normal, post-Covid lifestyle. Compared to other countries, we should have few long-lasting economic effects, while having avoided widespread Covid related deaths and illness. However, all this will happen despite appalling incompetence and politicisation displayed by the federal government.

Our vaccine rollout experience can be likened to a bus and its passengers who eventually arrive at the correct destination, despite numerous instances of breakdowns and getting lost, with a driver who not only does not know how to navigate but doesn’t actually know how to drive a bus! For the Prime Minister, his handling of the pandemic brings to mind the movie National Lampoon’s Vacation. A major difference is that Chevy Chase plays a likeable character, albeit inept.

Australia’s first Covid vaccination rollout plan was announced at the end of 2020. While it is now largely all over bar some shouting, it has been a rocky bus ride for all Australians.

The original rollout objectives were announced by the health minister December28, 2020. At that time, it was the federal government’s intention to complete the two-dose vaccination for all Australians by the end of October 2021. We can assume the minister’s goal was an uptake rate of 80 per cent or more of the 16+ population (20.6 million) or about 65 per cent of the whole population (25.7 million). Vaccinations for those aged 12-15 had not been approved then, and children under 12 were barely even considered.

As we write, our current vaccination data in early December indicate a significantly better result, with 88.7 per cent of those aged 16+ already double dosed and 74.5 per cent for the whole population. Further, the rates for at least one dose — which indicate the eventual double dose rate — are remarkably high at 93.1 per cent of 16+ and 80.9 per cent of the total population. (Results for 12+ show similar uptake rates.)

Perhaps the ideal rollout would have aimed for completion by June 2021, by that time giving every Australian in the country an adequate and fair chance to be vaccinated with an mRNA vaccine or suitable substitute. That we ran six months behind that date perhaps has a silver lining. While we did have extended lockdowns in NSW, VIC and the ACT in the second half of 2021, we have been able to benefit from the experiences in other countries now suffering yet another Covid wave.

We note that, as to be expected, the vaccination rates are slower in the four states and territories with the biggest areas. Assuming they catch up, by the start of 2022 we can expect a vaccine uptake for the whole population of at least 81 per cent, perhaps as high as 85 per cent.

That means we are likely to overtake many countries we often compare ourselves to. We should overtake Denmark, which lead the world some months ago with its plan to live with Covid. The following graph is from Our World In Data: 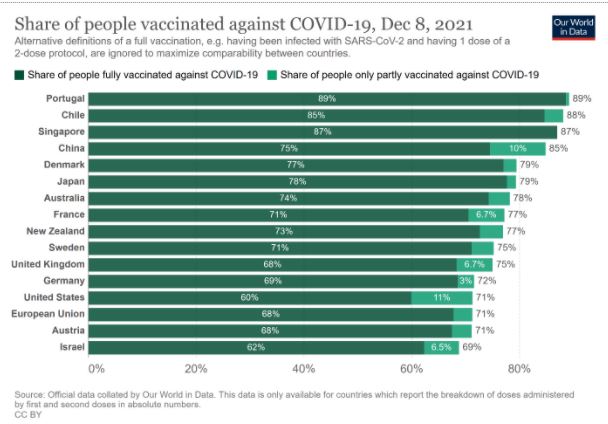 The 16+ and 12+ data will become irrelevant as vaccination will soon begin for Australian children aged five to 11. Other countries will do the same, and once this younger age group is added, Australia should still retain its position towards the top or go even higher. Perhaps we can expect a vaccination rate for the whole country (5+ years) exceeding 90 per cent, approaching that by the end of January 2022.

This result is mirrored by the success Australia has had in controlling Covid infections, with just 81 deaths per million compared to 2000 to 3000 per million in many European countries and the USA.

From mid-2020, NSW leaders seemed to expect every other leader to assume they knew best and everyone else had to follow their Covid policies. Yet the conversations I had with a range of people in all those states with strict Covid restrictions provided anecdotal evidence that they were quite happy about what their leaders were doing. In particular, in recent months while NSW, VIC and ACT struggled to eliminate Delta under months of lockdown, before switching to a policy of trying to live with it, the other states and territories lead quite normal, Covid-free lives.

If money and aggregate spending is a measure of happiness, here is clear evidence that the Covid-free jurisdictions performed better economically in the third quarter of 2021.

The Covid-free jurisdictions are in the process of opening up, but doing so very gradually to ensure their hospitals and medical systems can cope.

Tasmania is of interest in the intense way it is preparing its authorities and the populace for the arrival of Covid on December 15; they have had about 20 successive months of effectively zero community cases.

The Northern Territory is limiting traveller access to ensure Indigenous communities are not impacted, so far successfully.

Understandably Western Australia is the most cautious of all given the vastness of the state and the remoteness of Indigenous communities.

But open up they all will. The Guardian has a very useful vaccine data tracker. It includes this graph, showing estimates of when key targets were or are likely to be met for the 16+ age groups.

Thus The Guardian estimates that Australia overall will reach 90 per cent double dose for 16+ just before Christmas. By then, NSW, Victoria, the ACT and Tasmania will have reached 90 per cent or higher, the first three having been there before the end of November. However, SA will reach 90 per cent in early January and Queensland, the NT and WA late January or early February.

Instead of the country meeting its goal to open up internationally as a combined effort at a given point of time, say mid-December, there will be a gap of about three months, from November to February, between when NSW announced international flights at around 70 per cent and WA does at 90 per cent.

While we see the huge disparity between states and territories opening up, only time will tell what the consequences were and whether their judgements were vindicated by minimising economic fallout and avoiding hospital and health crises. The damaging financial and mental impacts of lockdowns and closed borders on individuals, businesses and industries, and children, students and split families are unquantifiable.

Of course there were distinct failings in our handling of infections and rolling out the vaccines. In particular, border issues have been a major issue for communities right on state borders.

NSW, while frustrating other jurisdictions by failing to lockdown hard and quickly, did manage to bring the Delta infection rate down September onwards, something Victoria and New Zealand have failed to achieve. And their decision to be the first to open up to international borders possibly spurred other jurisdictions to be more decisive.

In the long term perhaps all these issues will matter little if there is no catastrophic loss of life or hospitalisation.

A memorable quote from the movie The Best Exotic Marigold Hotel is: “Everything will be alright in the end so if it is not alright it is not the end.”

Our Covid experience is not yet over, especially as we determine if Omicron will be worse than Delta or whether other variants appear. We can expect the Australian people to respond superbly.

What is of concern is that the execution of Australia’s vaccine rollout by the federal government was so shambolic that the eight states and territories had little alternative but to take the initiative and go their own ways.

Tomorrow, we look at the mishmash planning dished up to the Australian people by our national leaders in this time of crisis.