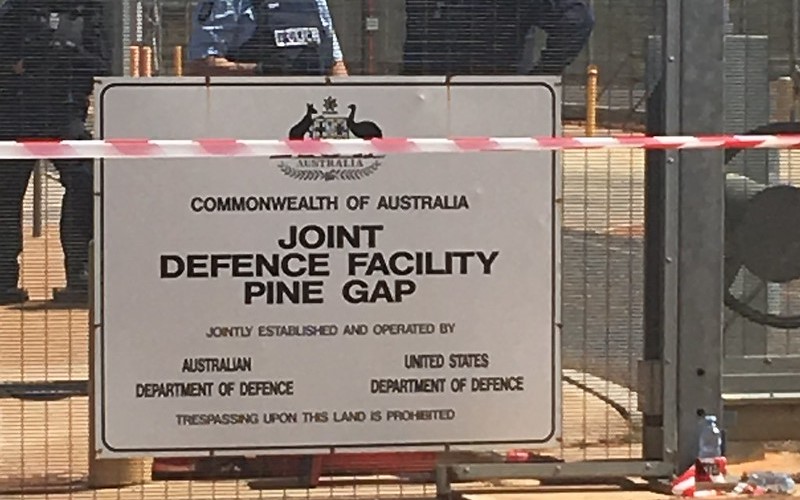 As the world’s nuclear arsenals build even more killing power, the need for Australia to abandon this perilous defence arrangement only increases.
The conventional wisdom has it that in the matter of nuclear weapons Australia is an exemplary international citizen. According to the Standard Version, it diligently supports the various nuclear arms control and disarmament regimes, and adheres to the position which regards nuclear weapons as instruments of nuclear deterrence and thus of the stable relations between major powers. Nuclear war-fighting is eschewed. Virtue is asserted. Res ipsa loquitor. The problem is that both claims are not only false, but embedded within what passes for defence policy with increasing willed ignorance, deceit and dishonesty.

At issue is the Australia’s unqualified general support for the various postures the US adopts and the particular role which it provides through the joint Australia-US facilities at Pine Gap and Northwest Cape. Their status as integral components in US global nuclear strategy – and thus nuclear targets in the event of major, peer-to-peer-war challenges the concept of government by consent of the governed.

The arrangements and agreements between Canberra and Washington have never been made public; indeed, successive governments have been industrious in their attempts to close off anything resembling national dialogue or debate on them.

This, of course, is a traditional and dishonourable tradition. Its origins are to be found in the official dishonesty surrounding Australia granting the British government the right to conduct a series of nuclear weapons tests at Maralinga, Emu Plains and the Montebello Islands from 1952 to 1963.

Unabated, it has coarsened the legal and ethical fabric of the nation’s security and foreign policy ever since to the point where the obvious has to be restated because, essentially, it no longer gives cause for shame, outrage, or anger.

Consider just six issues on which policymakers and mainstream national security commentators and scholars have been mute.

First, the context. Australia’s dominant alliance partner has, throughout the period since the ANZUS treaty has been in existence, infused its approach to maintaining global supremacy with what, in shorthand, is preponderant power underscored by what might be described as nuclearism — the ultimate threat to use nuclear weapons even in response to non-nuclear forms of aggression.

Over time this disposition has hardened into a war-fighting doctrine which certain US military leaders welcomed in mid-2019 because it could “create conditions for decisive results.” The fact that there is no indication of what such a victory might entail only contributes to the lunacy of the position.

Diplomacy, it seems, has been substituted for by bellicose statements by high-level military and civilian personnel which exhibit, little more than its relegation to an irrelevance beyond its cosmetic utility.

Second, there is proliferation by stealth. The US initiative to modernise its nuclear arsenal by installing the burst-height compensating super-fuze has extraordinary implications. It effectively triples the killing power of its ballistic missiles and, as described by three of America’s most respected weapons analysts (Hans Kristensen, Matthew McKinzie and Theodore Postol) in the Bulletin of the Atomic Scientists the situation is one in which the US has developed “the capacity to fight and win a nuclear war by disarming enemies with a surprise first strike.”

Third, the advent of weapons with warheads described as “variable yield,” “low yield,” “clean” (sic), or “mini nukes” has encouraged declarations at the highest levels in the US that, under certain circumstances, nuclear weapons have “tactical” utility. And they are a matter of pride: as the head of US Strategic Command told a congressional committee in 2020, these innovations made him “proud to be an American.”

Fourth, this embrace of tactical nuclear weapons cannot be separated from the explicit intention to envisage nuclear weapons as inescapably enmeshed in the overarching concept of deterrence. Put another way, for Admiral Richard, and those of a like mind, there is no meaningful distinction to be made between conventional and nuclear deterrence: they comprise a single entity, the former being dependent on the latter for its intellectual and strategic credibility.

By extension the fifth comes into focus: the US to continuing to reserve to itself the right to a nuclear first strike. In 2020, in testimony before the Senate Armed Services Committee, General Tod Wolters, commander of US European Command and Supreme Allied Commander Europe, went so far as to enthuse over it with this endorsement: “I’m a fan of flexible first use policy.”

Sixth and finally, there is nuclear deterrence itself. The term is employed in polite conversation as though it was simply a technical description; in reality, however, it is an obscenity and this becomes obvious when its explicit principle is confronted.

In simple terms it is a mutual suicide pact to the preserve the status quo of the time. Richard Tanter on this site has accurately described Australia’s position within the alliance and under the nuclear umbrella as one which it expects the US to commit genocide in the name of the country’s defence.

An important point is missed here: this understanding or expectation has never been put to the Australian people. And even if they agreed it is moral and ethical nonsense. In a democracy worthy of the name, the governed cannot order the government to commit crimes against humanity, nor, in the absence of such an ordnance, can the government arrogate to itself the right to commit crimes against humanity on behalf of the people.

The chances for this essentially Faustian Bargain to be disrupted appear to be on a spectrum between slim and zero if recent developments are any guide.

Reports in the US repeat that the claim that that one of the reasons the first strike option must be retained is that America’s allies — Australia to the fore — demand it. ASPI, pre-eminent adviser to the government, evidently approves. But the government? Silent on such matters.

It is stance that is at least consistent with the decision in October 2017 not to support a UN General Assembly resolution outlawing nuclear weapons, and the refusal, two months later, to congratulate Beatrice Fihn, the director of the Melbourne-based International Campaign to Abolish Nuclear Weapons (ICAN) on being awarded the Nobel Peace Prize.
What reigns, then, is a strange amalgam of a fear-based system which supported by deliberate absent-mindedness. And that’s a generous interpretation for a polity whose policy elites are somehow psychologically reassured by the US strategy (such as it is).

But the explicit nature of the thing called nuclear deterrence is more properly seen in the first instance as a societal delusion that nuclear deterrence, against all of the historical evidence that it has so often nearly come to ruin, is infinitely survivable.

What is even more troubling is that to actually believe in it, to support it, to proselytise in its favour is enter the mindset of those, who for less transgressions than nuclear weapons will minimally wreak, are classified as psychopaths, or criminally insane.