A ten-point plan for managing floods in Australia 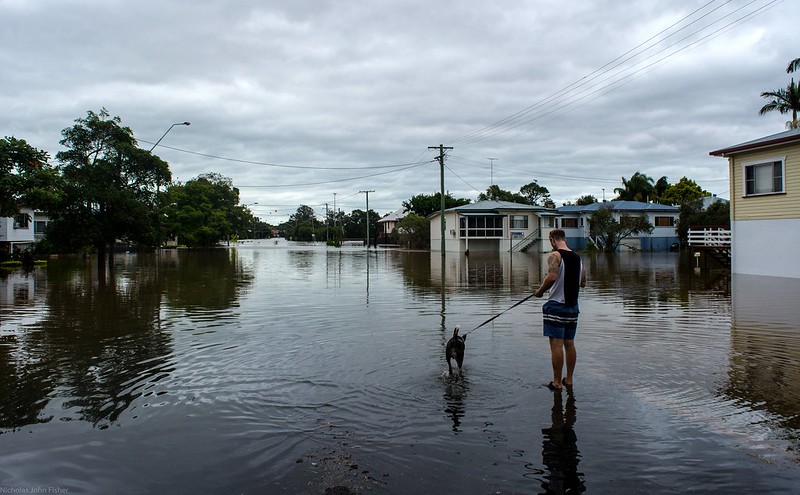 When building on floodplains cannot be avoided, ensure that the building is done in a way that is compatible with floods. Image: Flickr /Nicholas Fisher

All flood crises are more or less wasted, and the ones we have just experienced in New South Wales and Queensland will probably be no different.

Yet what has occurred on Australia’s east coast over the past two weeks leaves us with a ‘learning moment’ to determine what we can do to better manage floods in the future: this should be a strategy-forming opportunity. Sadly, we are unlikely to grasp it: we rarely have in the past and this time is not likely to change the situation fundamentally. Recovery co-ordinators will be appointed and reports written but the media, the political system and the community will move on and not much will happen. Next time severe flooding occurs, people will express the same surprise, disbelief and anger but we will do very little before we move on yet again.

Nevertheless there is no better time than the present for a big-picture examination of the problem. There follows a ten-point plan for Australia to deal with flooding. We already do some of what’s recommended, but we rarely do enough of it and what we do falls away after an initial burst of enthusiasm and public-sector investment. Some initiatives proposed below we have barely tried.

1.   Recognise that flood management requires a multi-pronged approach. Our standard reaction is to see floods as enemies to be overcome, which leads us to seek to place most of our trust in ‘regulating’ floodwaters by building structures like levees, flood mitigation dams or flood bypasses. Instead we should recognise that we must learn to live with floods because they are inevitable and unconquerable, requiring us also to seek to modify communities and community behaviour as well as floodwaters. This involves education, and we should be looking at school curricula and at adult education for opportunities. Mitigation by way of structures has a role, but it cannot be the whole of the strategy. Levees, after all, are frequently overtopped: this has happened in seven urban centres in New South Wales alone since 1990. Several of the points that follow focus on community-modifying methods which will help people adapt to the inevitability of flooding.

2.   Ensure that communities, householders, businesspeople and the operators of institutional premises in flood-liable areas know how to plan for floods ─ and are motivated to do the planning. That means more flood-defensive land use planning (including zoning) on the part of councils, a deeper consideration of warning, rescue, evacuation, resupply and community engagement strategies by the emergency services (some of which plan, but their planning documents are too often allowed to become dated). Planning can and must be done for events of unprecedented severity; in other words extremes must be foreseen. There must also be a recognition on the part of residents that planning (which simply involves thinking about what should be done when a flood threatens) is necessary. Household-based planning is rarely conducted, but it is easy to do when it is explained and it can contribute hugely to saving on losses when floods strike ─ because it identifies in advance what should be done (for example by way of property-protecting strategies including arranging to move items off-site). There is a need too to counter myths which are deeply embedded in the psyches of people in flood-liable areas ─ the notion, for example, that levees have rendered floods harmless by keeping out all future floods. They never can. Nor does councils allowing people to build in flood-liable areas mean that such areas are not actually prone to flooding, yet many believe the opposite to be the case. Planning can be used to educate people on several fronts.

3.   Educate people about flood warnings: this must be a major part of creating more informed communities. Our flood prediction and warning systems provide information on approaching floods, but only rarely do they communicate effectively to people in the path of such floods about what they can expect. Information is provided, but not teaching ─ so there is little learning. People are routinely surprised and complain that they weren’t warned, or that the flood they have just experienced caused them more damage than an even bigger one in the recent past which left them relatively unscathed. To a degree they are right. There is scope here for regular provision of carefully-written information, letter-boxed periodically in flood-liable areas, and information imparted in neighbourhood-level meetings. The information needs to explain flood dynamics in simple, comprehensible, non-technical terms. Meetings allow people to ask questions about flood management strategies including the meaning of predictions and advice. Critically, a better understanding of warnings, and warnings being made more relevant to the level of the individual property (there is scope for more use and communication of flood animations, forwarded to people’s mobile phones) will allow people to better plan, because it will help them to understand the need to act before they see the floodwater rather than delaying and thus squandering the benefits warning can provide.

4.  Change the balance between spending on mitigation and spending on relief and recovery. The Productivity Commission’s figures on public investment in relation to flooding are often quoted: it is estimated that 97% of the public spending as a result of flooding is on relief and recovery against only 3% on mitigation. Queensland, in particular, has been dilatory in its investment in town-protecting levees, although the 2011 floods produced a brief flurry of levee construction. New South Wales has done better over many decades, but a backlog of mitigation projects awaits funding there too.

5.   Ensure that our institutions pull in the same direction. We cannot continue to have local councils, influenced by development interests, talking down the flood threat and promoting development in severely flood-liable locations ─ and then expect insurance companies to ‘bale out’ the consequences. This leads to unaffordable premiums, which means people with assets in flood-prone areas being unable to insure their dwellings and contents adequately. It also leads to rises in insurance premiums generally. Likewise we must ensure that mitigation efforts do not lead to the so-called ‘levee paradox’ in which building a levee (or raising a dam) promotes an intensification of land use in the ‘protected’ areas: when the levee is overtopped (or the dam’s capacity is exceeded), there is thus more to be lost and in addition more lives are placed at risk. A potential example can be seen currently in New South Wales where some Cabinet ministers advocate the raising of Warragamba Dam to pond floodwater and thus mitigate downstream flooding ─ but this proposal has led to the suggestion from within the same Cabinet that raising the dam could legitimately be used to justify releasing more low-lying floodplain land for housing on a mass scale. Such contradictory thinking leads to wasteful, inefficient, vulnerability-enhancing development in which mitigation initiatives are undermined from within.

6.  Manage land use on floodplains more effectively. In recent decades the trend has been for residential floors to be permitted only above the 1% Annual Exceedance Probability (AEP) (so-called one-in-100-years) flood level, but this standard is less effective than might be supposed: floods exceeding the standard often occur as at Lismore recently. A better approach is to use risk rather than a statistically-derived, abstract flood level as the fundamental criterion, and to be more conservative in decision making than is usually the norm under the current numerically-based approach. For example, we should err on the side of caution when considering the likely impacts of flooding above currently defined flood planning levels and be prepared to reject development at higher levels than at present. This will help contain the steady drip, drip, drip of development on floodplains which stealthily, almost imperceptibly, increases community vulnerability.

7.  Be more vigorous in promoting buybacks of the most severely at-risk properties. In the valley of Sydney’s Hawkesbury-Nepean river system there are an estimated 5000 dwellings whose floors are below the 1% AEP flood level (and the number of like dwellings in the valley of the Georges River is probably even higher). This is the legacy of past development from the decades before the adoption of current floor-level standards. Voluntary buybacks, paying market value to owners followed by the physical removal of the houses, have been available in some areas for many years but too few people have taken them up. A stronger commitment to convincing property-owners, perhaps involving additional incentives, is needed.

8.  Stop using inadequate, misleading language to describe floods. The term ‘one-in-100-years’ flood is now used in the media and the community to describe any serious flood: it has become unhinged from its originally intended meaning. Properly used, it should refer to average recurrence intervals rather than, as often occurs in receptors’ minds, to the length of time that will elapse before the next flood of similar proportions. Some people believe that having recently experienced a described 100-year flood they will be immune from another for the rest of their lives. Using even larger numbers (for example, the ‘one-in-1000 years’ flood), as some commentators have done in reference to the recent floods on the New South Wales North Coast, simply raises disbelief and cynicism and derails community discourse. Poorly-used terms discourage understanding.

9.   When building on floodplains cannot be avoided, ensure that the building is done in a way that is compatible with floods. This means using appropriate building materials (not plasterboards, chipboards and plywood bracing which cannot withstand immersion) and banning concrete slabs. And when we replace flood-damaged infrastructure, we must use the ‘build back better’ principle rather than simply replacing to the previous standard what was damaged so that it will be damaged again in a similar-sized flood. Recovery should seek improved standards, not more of what existed before.

10.   And most important of all, take climate change seriously by cutting back drastically on the mining and burning of fossil fuels. Most nations have been dilatory on this, Australia more than many others despite the fact that our per capita omissions of carbon dioxide are very high by world standards. It is well known that a warming atmosphere, now comprehensively proven, accurately measured and with temperatures rising, can hold more water vapour to be released as flood-producing rains when cooling occurs. The likelihood is that severe floods are already occurring more frequently than they did a few decades ago, and further atmospheric warming can only exacerbate the situation. As a nation we are creating more than our share of the problem and should be contributing more to the solution than we do.

There is no more manageable agent of natural hazard in Australia than flooding: we know where it will occur, we usually get warning of it and we can predict what its effects will be. But we never manage it well, and it hurts us over and over again and to a greater extent than it should.