Hans Kung: a theologian for everyone 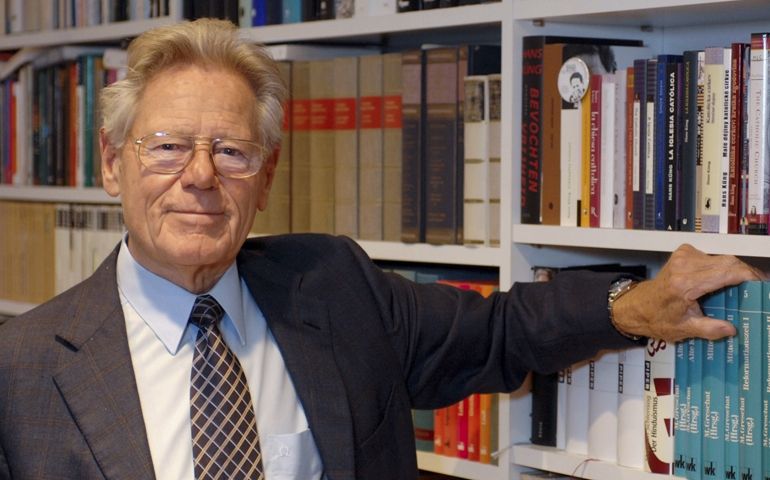 Hans Küng died last Tuesday aged 93. I had the honour of knowing him as a friend. He was a rare breed: a theologian who spoke to people of diverse beliefs and none.

It’s not often that you get a chance to improve a world-famous Swiss-German theologian’s English as you drive along the Reuther Freeway in Detroit, Michigan in your Volkswagen Golf. Yes, I know ‘world-famous’ is not a term that you usually apply to theologians, but this was 1983 and the theologian in question was writing op-eds for the New York Times, was being interviewed by all the major US networks, was giving lectures all over the country and was Visiting Distinguished Professor at the University of Michigan at Ann Arbor. I was his temporary amanuensis and occasional driver.

‘Paul, make sure I speak proper ‘English’ English, not American English,’ he said as we drove to yet another lecture. I took as our guide to ‘proper’ English some of the patter arias from Gilbert and Sullivan. No one can write tongue-twisting English like Sir William Schwenck Gilbert, and Küng took to the modern major general and Sir Joseph Porter, KCB like a duck to water. He was fascinated that the British navy minister was called ‘First Lord of the Admiralty,’ and he loved the ‘three little girls from the ladies’ sem-in-air-ry’.

Born in Sursee, Switzerland, in March 1928, into a middle-class family, Küng was the eldest of seven with five sisters.  Deciding to be a priest at age 11, he studied for the Diocese of Basel and was educated at Rome’s Gregorian University, the Sorbonne and the Institut Catholique de Paris. In his Memoirs he says that he grew up ‘in the time of Adolf Hitler’s seizure of power and the threat to our national and personal freedom’ in Switzerland and that, he says, ‘shaped my early years.’ Freedom of thought and speech were primary values for him.

His doctorate was on the great Protestant theologian Karl Barth’s theology of justification, the notion that faith alone saves us, not what we do, what Luther called our good ‘works’. Küng showed that there was no real conflict between Protestants and Catholics on this fundamental doctrine, a position widely accepted nowadays.

He was ordained in 1954 and in 1960 he was appointed a remarkably young professor of Fundamental and later Catholic Theology at Tübingen University, Germany’s equivalent to Cambridge. Pope John XXIII had called the Second Vatican Council in 1959 and Küng was perfectly placed to set an agenda for it.

A prolific writer, in 1960 he published The Council, Reform and Reunion which set out a clear agenda for Vatican II with a strong ecumenical flavour. This was re-enforced by his book Structures of the Church (1962) and together with his lectures to packed audiences across the world, including Australia in 1971, these books had a profound influence on the subsequent history of the Council and Catholicism. John XXIII appointed him a conciliar peritus (expert advisor).

Küng believed theology must underpin and explain belief and should always be in the public square. Catholicism, he said, had to transcend post-Reformation controversies, reconcile with Protestants and retreat from the First Vatican Council’s (1870) definition of papal infallibility. He wanted an open church with a married clergy, women in all ministries and the abandonment of outdated practices that contradicted the Gospel. He was critical of the many vacillations of Paul VI (+1978) after Vatican II – the pope’s nickname was ‘Hamlet’ – and he openly repudiated the attempt of John Paul II to re-interpret the Council in line with his own idiosyncratic theories.

In The Church (1967) and specifically in Infallible? An Inquiry (1971) Küng argued that infallible propositions are impossible. His approach was historical and he maintained that, rather than the pope being infallible, the church is ‘indefectible’, that is that despite errors and misjudgements, in the long term it will remain true to God’s Word and Jesus’ teaching. The Vatican was outraged.

The result: in late-1979 Küng was stripped of his licence to teach as a ‘Catholic theologian’, but not of his good standing as a priest. In the early-1980s he went through a difficult period, as the second volume of his Memoirs Disputed Truth shows.

Nevertheless, there was widespread support for him across the European and Anglo-American Catholic, Protestant and secular worlds, and it was around that time that I met him in the US. Having lost his Catholic chair, Tübingen University appointed him to a new chair of Ecumenical Theology which he occupied for the rest of his life.

After 1980 he published some of his best books: Does God Exist? (1980) confronting that precise question, On Being a Christian (1984) takes us back to the historical Jesus and the implications of his teaching, and Christianity and the world religions (1986) highlighting Küng’s profound ecumenism. There are also books on Mozart, Freud, dying with dignity, Islam, Judaism and global ethics. His two volumes of Memoirs (2003 and 2008) and his Can We Save the Catholic Church? (2013) conclude a bibliography of some 34 books.

In his later years he put much of his energy into the Global Ethics Foundation, that is committed to bringing world religions together to contribute to peace and the welfare of society by establishing a basic set of common values.

Some have claimed that Küng was arrogant. I suspect part of that is that he was Swiss-German and he could be abrupt and brusque. He certainly liked talking. I remember a dinner party when he discoursed for an hour on the role of women in the church, addressing all his remarks to the men present, all priests, completely ignoring the two women there. The hostess was an experienced Catholic educator and the other a distinguished Dominican sister. Eventually, it was the nun who exploded and rightly told him some home truths about chauvinist theologians and women in the church. To his credit, Küng copped it sweet, largely saved by his sense of humour.

He remained a priest in good standing throughout his life. He worked enormously hard and had an excellent exercise regimen. Socially, he was wonderful company. His biographer Robert Nowell says ‘He combined the very qualities that many of the Catholic church’s detractors have regarded as totally incompatible: a passion for truth and loyalty to Rome, an open-minded willingness to accept the fruits of critical inquiry, and adherence to what from the outside was seen as a closed dogmatic system.’

I simply remember him as a man of deep faith, a thoughtful friend – I have several handwritten notes from him – as well as an articulate man of integrity for whom truth was only norm, a man of prodigious energy and commitment above all to the message of Jesus and the genuine tradition of Catholicism. He was truly a theologian ‘for all seasons.’