Abortion: people want clear-cut answers but it’s not that simple

I remember the days before the 1973 Supreme Court decision of Roe v. Wade. Many women died from pregnancy complications or from the back-alley abortions that impoverished women or frightened teenagers inevitably sought. I remember when President Bill Clinton said in 1992 that abortion should be “safe, legal, and rare”. I remember as well, about the same time, a serious conversation about abortion with a now deceased European cardinal.

The cardinal had been quite well-known for his strong opposition to abortion. He invited me, however, as an historical theologian, to interview him about the Second Vatican Council (1962 – 1965). Just the two of us. After talking about the Council, I asked him if he really thought abortion could never be justified. He stared at me in silence for a minute and then said:

“Not for publication! My younger sister was a missionary nun in Africa. She was raped and became pregnant. I contacted a missionary doctor, paid him, and ordered him to perform an abortion on my sister, and then to keep his mouth shut.”

According to the Associated Press, for the leaders of the two largest US Christian denominations — the Roman Catholic Church and the Southern Baptist Convention — the major concern about the Joseph Biden administration is its support for abortion rights. Many US Catholic bishops and the president of the United States Conference of Catholic Bishops have been very critical of President Biden.

I would begin with a clarification of terms. Some equate the “anti-abortion” position with the “pro-life” position. Quite often this is not the case, however. A great number of contemporary US anti-abortion political and religious leaders support capital punishment and ignore poverty, healthcare, crime, equality, nuclear weapons buildup, and the environment. Such behavior is not pro-life and some bishops in the US, like Bishop John Stowe, Diocese of Lexington, Kentucky and Bishop Robert McElroy, Diocese of San Diego, have made this very clear.

As a Catholic I remember and applauded Cardinal Joseph Bernardin, Archbishop of Chicago, and his 1983 “Seamless Garment” appeal for a consistent ethic of life with attention to the whole array of life issues. Bernardin was president of the United States Conference of Catholic Bishops from 1974 to 1977.

I still resonate completely with his “Seamless Garment” perspective. Unfortunately it was later criticized by then-Cardinal Joseph Ratzinger while he was serving as Prefect of the Congregation for the Doctrine of the Faith. Ratzinger, the later Pope Benedict XVI, feared the “Seamless Garment” approach would diminish the unique evil of abortion.

Direct abortion is the termination of a pregnancy by removal or expulsion of an embryo or fetus before it can survive outside the uterus. An abortion that occurs without intervention is known as a miscarriage or spontaneous abortion. Miscarriage is the most common complication of early pregnancy. Among women who know they are pregnant, the miscarriage rate is between 10% and 20%.

Most studies confirm that criminalizing abortion doesn’t lead to fewer abortions. It leads to more women dying from unsafe procedures. The most recent study of the US abortion rate indicates that the rate is now at its lowest since legalization in 1973. Researchers attribute this decline to better sex education and greater availability of contraceptives, reducing the rate of unintended pregnancies in general and leading in particular to an historically low teen pregnancy rate.

Anti-abortion supporters argue that abortion is morally wrong on the basis that a fetus is an innocent human person or because a fetus is a potential life that will, in most cases, develop into a fully functional human being. Some believe that a fetus is a person upon conception. Some in favor of abortion argue that abortion is morally permissible because a woman has a right to control her own body and its life-support functions. This position simply ignores the question about whether or not the fetus is an innocent human person or prioritizes the rights of the woman over the rights of the fetus, whether or not it is a person. (The famous 1971 article, for example, “A Defense of Abortion” by the American philosopher, Judith Jarvis Thompson, argued that even if the embryo or a fetus is a person, the woman does not have an obligation to carry it in her uterus.)

Are fertilized eggs human life? Surprisingly between 30% and 40% of all fertilized eggs miscarry, often before the pregnancy is known. Some fertilized eggs develop into tumors The question of when an embryo or fetus is a human life is still being debated with a variety of scientific and ethical opinions and theories. A good example, perhaps, concerns brain activity. If we use the idea of brain death as the criterion for dying, then the brain waves’ beginning would be the start of life. If one believes that death occurs when brain waves in the cerebral cortex cease to exist, then one could propose that human life begins, when brain activity starts around the 23rd week of a normal 40 week human pregnancy.

Some theologians suggest that human life begins with “ensoulment”. The 13th-century philosopher-theologian, Thomas Aquinas, drawing on the philosophy of the fourth century BCE Aristotle, thought the fetus receives a soul 40 or 80 days after conception, depending on gender: 40 days for males and 80 days for females. Aquinas and his contemporaries knew nothing about the female contribution to procreation. (Aquinas himself declared that women are “deficiens et occasionatus” – defective and misbegotten.)

In 1591, Pope Gregory XIV set “ensoulment” at 166 days of pregnancy, almost 24 weeks. In 1869, Pope Pius IX moved the “ensoulment” clock to the moment of conception under penalty of excommunication, influenced, it was said, by scientific discoveries in the 1820s and 1830s. Nevertheless, the matter is still subject to debate in the Catholic Church. As recently as 1974, the Vatican’s Congregation for the Doctrine of the Faith acknowledged that the issue of “ensoulment” was still an open question.

When it comes to abortion, people want to see clear-cut answers about what is right or wrong. Frankly, I don’t think the answers are always that clear-cut. Some people get quite upset and angry when I say that. Sorry, but the question of when human life begins still gets a mixture of answers. Some are more biologically medieval than contemporary. People can and must make prudential judgments.

Right now, indeed, I believe the best responses about the morality of abortion and the morality of voting for candidates who favor the legalization of abortion are found in sincere conscientious reflection and decision-making. As the Catechism of the Catholic Church teaches, the human person “has the right to act in conscience and in freedom so as personally to make moral decisions”. This teaching is clearly stated and affirmed, specifically, in the documents of the Second Vatican Council (1962 – 1965) Dignitatis Humanae and Gaudium et Spes.

In Gaudium et Spes we read: “In the depths of our conscience, we detect a law which does not impose, but which holds us to obedience…. … As the innermost and inviolable part of the person, conscience is our encounter with the God who made us and wills our good. This means that conscience is accountable to God.”

I remember, with a bit of a chuckle, the observation of the Anglo-Catholic saint, Cardinal John Henry Newman, in his “Letter to the Duke of Norfolk” a book written in 1875: “I shall drink to the Pope, if you please, still, to conscience first, and to the Pope afterwards.” Newman’s observation reminded me of the 1969 commentary on Gaudium et Spes, by then theologian Joseph Ratzinger, who stated unequivocally: “Over the Pope as the expression of the binding claim of ecclesiastical authority there still stands one’s own conscience, which must be obeyed before all else, if necessary even against the requirement of ecclesiastical authority.”

The formation of conscience is primary and depends on the traditional sources of ethical knowledge: scripture, tradition, reason/science, and experience. Yes of course, this means that people of good will and conscience can disagree, even on the absolute but not infallible moral norms of the Catholic Church. That is why we need to build bridges and respectfully study, discuss, work, and learn together.

This article was published on February 12, 2021 in A.J. Dick’s monthly newsletter, Another Voice. 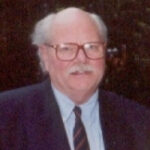