Kristina Keneally argues that when we come out of the current crisis we should aim for a lower level of temporary migration to make sure “Australians get a fair go and a first go at jobs.” Scott Morrison says cutting skilled temporary migration would hurt the economy. Who should we believe?

Part of the problem is the two of them are talking about different cohorts. Keneally is referring to the 2.1 million temporary entrants who were in Australia at end-March 2019. As Peter Mares points out, this group consists of a vast array of people in Australia under different visa categories and different visa conditions. The largest parts of this group are NZ citizens, overseas students, tourists and working holiday makers.

Working holiday maker numbers have been declining for many years while overseas students had been booming until the second half of 2019 when at last Government moved to tighten policy. It is with overseas students that Government has made the biggest mess and now wishes to wash its hands of the problems it has largely created. This winter, we will see hundreds of thousands of overseas students sleeping rough and reliant on charities.

There are also about 100,000 largely non-genuine asylum seekers in Australia – also due to Government mismanagement. There were a record 280,000 people on bridging visas in Australia at end March – another indicator of mismanagement – as well as about 140,000 skilled temporary entrants.

Scott Morrison was only referring to this last category which represents just over 6 percent of the larger group Keneally was referring to.

The skilled temporary entry category is the former and much maligned (by the union movement) sub-class 457 visa that Peter Dutton abolished and replaced with the new sub-class 482 in 2017-18. And while some criticised Dutton for a simple name change, that was unfair criticism. In his inimitable style, Dutton had taken a ham-fisted sledgehammer to skilled temporary entry that Immigration Minister David Coleman has ever since been trying to get around without upsetting Dutton. 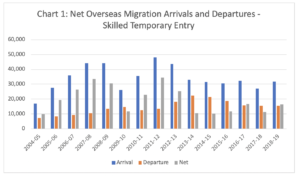 The high technology sector as well as the health sector in the USA have fought Donald Trump tooth and nail to prevent him from killing the equivalent visa category in the USA.

For years, however, the Government has resisted setting a much higher minimum salary for skilled temporary entry while the unions have insisted on ‘labour market testing’. The former is crucial to both protecting job opportunities of Australians and limiting the risks of exploitation of temporary entrants. But the latter, while having a laudable objective, is in practice little more than a bureaucratic charade.

Labour market testing requires employers to show they have properly advertised the job they want to fill and were unable to find someone suitable locally. Employers very rarely fail this test as it is impossible for a public servant to second guess an employer as to who is suitable.

Will Morrison and Coleman have the courage to fix the many design problems with Australia’s current skilled temporary visa and risk the wrath of both Dutton and the union movement?

Will Morrison risk the wrath of employer groups and implement genuinely effective measures to deal with wage theft and exploitation, not just of temporary entrants but also young Australians?

And will the Labor Party learn that the issues in this space are far more complex than its ‘temporary bad; permanent good’ mantra?