The coronavirus crisis brings to an end 20 years of high migration to Australia. On current policy settings, net migration in 2020 and 2021 will be close to zero, if not negative. Australia is looking at the biggest turning point in its population history – bigger than the Great Depression.

If significant numbers of long-term temporary entrants in Australia follow the Government’s instruction to ‘go home’, and are able to do so, net migration could be a very large negative. It is unlikely to recover quickly as border restrictions may only be gradually eased from 2021. History shows us net migration recovers only very gradually after a deep recession or depression.

Australia is looking at the biggest turning point in its population history – bigger than the Great Depression.

But how far will net migration fall and what does that mean for Australia’s population future?

Let’s start with an estimate of the stock of temporary entrants in Australia by end December 2020.

Including NZ citizens and visitors, there were 2.4 million temporary entrants in Australia at end December 2019. This was after growing steadily for over 20 years.

Minister Tudge announced in early April 2020, that the number of temporary entrants had fallen to 2.17 million, with some visa categories falling while others increased.

There is a further 60,000 overstayers who are not included in the above figuring. The number of overstayers may rise as various temporary entry visa applicants, including over 100,000 onshore asylum seekers who have arrived on tourist visas in recent years, are refused but cannot depart Australia.

The key public policy question is ‘what will happen to the 2.17 million temporary entrants in Australia at end March 2020 by end December 2020’. Detailed analysis of this is available from the author. The results are summarised in Table 1 below:

Source: data.gov.au, Temporary Entrants in Australia, Alan Tudge Press Release, 4 April 2020, visa reports on Home Affairs website. * Bridging visa holders are onshore applicants for further visas that have not yet been processed. They are mainly applicants for student visas, temporary graduates, parents, partners and asylum seekers. The estimated 279,000 bridging visa holders in March 2020 would be a new record surpassing the previous record of around 230,000.

Given the forecast weak labour market during the rest of 2020, a substantial portion of the 1.82 million temporary entrants forecast to be in Australia at end December 2020 are likely to be unemployed and reliant on charity to survive. If just over 70 percent are employed or have some form of support, including all remaining NZ citizens, that would still leave over 500,000 people reliant on charity.

At that level, it is likely governments will either assist people to depart or provide some form of social support to ease pressure on charities. The Government cannot continue to ignore an additional 500,000 people becoming destitute.

Of the 612,000 forecast decline in the number of temporary entrants in Australia during 2020, only those who were in Australia long-term (ie 12 months or greater over the past 16 months) will be counted as a net migration departure. And that is only if they subsequently stay out of Australia for the following 12 months out of 16.

The significance of this is that changes in net migration is how the ABS counts the contribution of immigration to population change in Australia.

Of the 485,000 forecast decline in the number of visitors in Australia during 2020, only a small portion will be counted as a net migration departure – perhaps as little as five percent.

On the other hand, it is highly likely the Government has cut back on the formal migration and humanitarian programs from 2020, as governments have during each recession for the past 50 years. Moreover, there will be few, if any, additional temporary entrants for the rest of 2020 and perhaps also much of 2021.

The overall impact is likely to be a net migration outcome in 2020 (and possibly also 2021) that is close to zero and more likely negative. This would particularly be the case if the government decides to assist long-term temporary entrants who become destitute to leave Australia.

But what does that mean for Australia’s long-term population directions?

If the Great Depression and the recession of the early 1990s are any indication, both net migration and the fertility rate will remain low for the rest of the current decade. 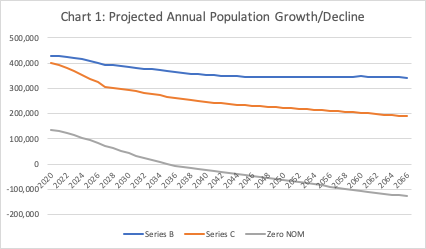 While the net migration and fertility assumptions in Series B are both significantly above those used in the 2019 Budget and in Treasurer Frydenberg’s ten year budget plan, even Series B is now totally implausible.

Series C in Chart 1 assumes a fertility rate of 1.65 babies per woman, most likely still on the high side. It also assumes net migration of 175,000 per annum, also on the high side if economic growth remains weak. It was around 180,000 per annum during the Abbott Government even though immigration policy settings were highly facilitative – the low net migration outcome in those years was the impact of a weak economy and a weak labour market.

Series C would result in the population growth rate falling to 0.5 percent per annum (less than 200,000) by 2066 and natural increase becoming negative later in the century (ie positive net migration would be needed to prevent the population going into absolute decline).

The zero net migration option would lead to Australia’s population peaking in the mid-2030s and then declining to 23.8 million by 2066 and continuing to decline after that at an accelerating rate.

In terms of population ageing (see Chart 2), Series B would see the portion of the population 65+ rising from 15.6 percent in 2018 to 20.9 percent in 2066. Series C, with its more plausible fertility and net migration assumptions, would result in the portion of population 65+ rising to 23.0 percent. The zero net migration option (including fertility at 1.65 babies per woman) would lead to the population 65+ peaking at around 30 percent by 2060. That would be around 5 percentage points higher than the current situation in Japan. 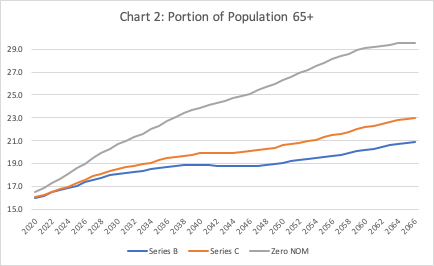 Drawing on the consensus research findings, a higher rate of ageing would, all other things equal, lead to a lower employment to population ratio, slow productivity growth, weak private consumption and insipid levels of business investment. That would be similar to the last decade when the working age to population ratio of all developed economies had simultaneously been in decline. It would make it impossible for the Government to maintain its already quite unrealistic (and largely election-driven) forecast of real GDP growing at 3 percent per annum for the decade of the 2020s.

A faster rate of population ageing would also reduce per capita income tax, GST and company tax collections at a time the ageing population would be putting upwards pressure on government expenditure, particularly health and aged care. The ongoing surpluses forecast in the 2019 Budget ten year plan were silly to begin with and are now simply ridiculous.

The idea of repaying government debt, if not already a fantasy, would become a pipe dream.

It should be noted the decade of the 2020s will be the second successive decade in which the working age to population ratio of all developed nations, plus China and Russia, will simultaneously be in decline.

For an open trading economy such as Australia, that represents a further obstacle to any return to positive per capita economic growth.