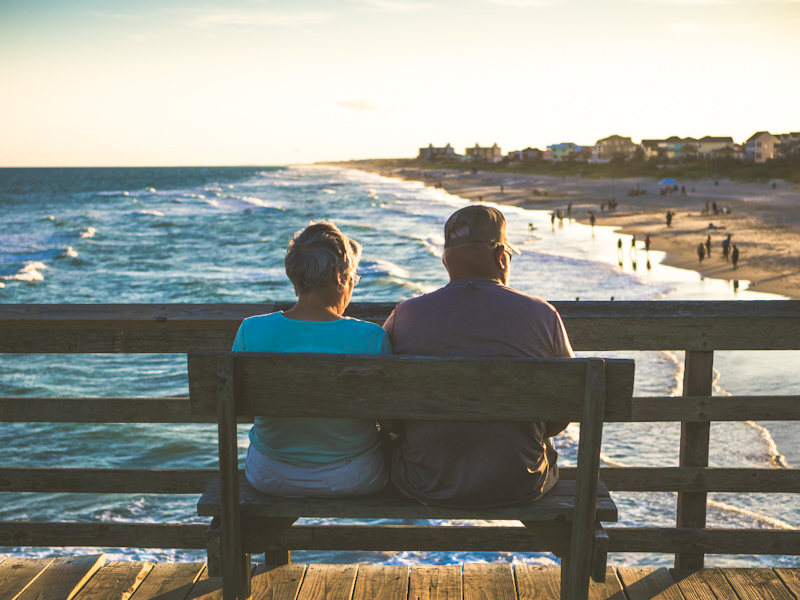 A lower fertility rate and lower NOM for the foreseeable future will mean that Australia will age much more rapidly than forecast in the 2015 Intergenerational Report and in the 2019 Budget.

Research on the economic impact of population ageing is remarkably consistent in finding that it will:

While most developed nations (eg in Europe and Japan) have been ageing for much longer, Australia’s working-age to population (WAP) ratio peaked in 2009 at around 67.5 percent after rising from around 61 percent in 1960. By 2019 it had fallen by around two percentage points to 65.3 percent (Chart 1). Australia’s population is ageing but not as rapidly as other developed nations. 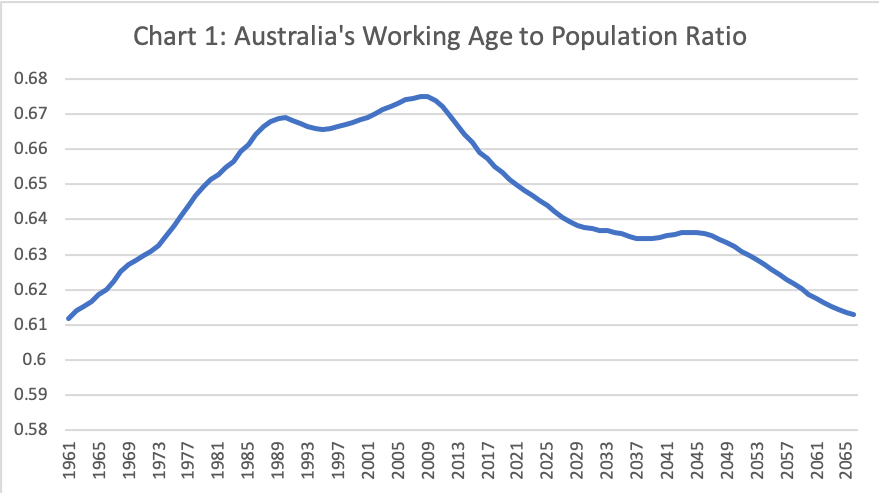 Australia’s WAP ratio is projected to decline by another 1.9 percentage points by 2030 to 63.8 percent assuming net overseas migration (NOM) averaging 175,000 per annum, a fertility rate of around 1.65 babies per woman and life expectancy growing but slightly more slowly than assumed in earlier ABS population projections. 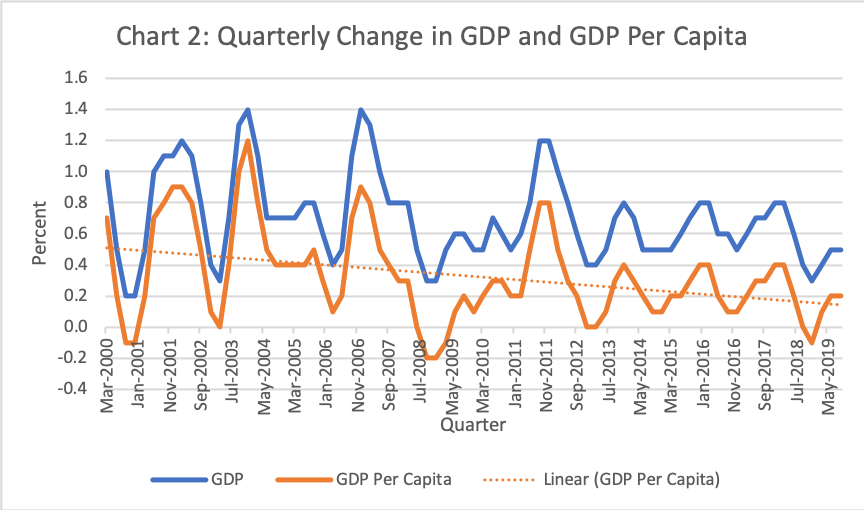 The crucial policy question is whether the lower rate of per capita GDP growth in Australia since 2009 has been impacted by the declining WAP ratio and whether this negative impact will continue as the WAP ratio continues to fall over the next 20 years?

Was Australia’s lower rate of productivity impacted by population ageing?

In a 1938 article titled Population Problems and Politics, Nobel prize-winning economist Gunner Myrdal argued: “age distribution has consequences both for the productivity of people and for total consumptive demand.”[i]  He said that with an ageing population, “young people will have an easier chance to ‘get-in’ but they will meet greater difficulties in ‘getting-on’ and ‘getting upward’.”

He also finds that large cohorts aged 15-39 are associated with lower productivity. The findings for the cohort aged 50-59 is negative but only marginally so while the productivity impact of a large cohort over 60 is generally negative.

Aiyer, Ebeke and Shao (2016)[iii] similarly find that “workforce aging has direct implications for labour productivity. They consider that if different age cohorts differ in their productivity, then changes in the age distribution of the workforce will affect average output per worker.”

Berk and Weil (2015)[iv] find that “as populations age, the degree to which workers׳ human capital reflects the cutting edge of technology falls because education took place further in the past.”

The Productivity Commission (2019) notes that “while Australia has experienced a productivity slowdown, it has been more persistent and extreme in many other countries.”

The WAP ratio for all OECD economies is now in decline (UN Population Prospects 2019 Revision). South Korea was the last major developed economy to reach a peak in its working-age to population ratio in 2012 while China reached this in 2010. The USA, Canada and the UK reached this point in 2007 while Japan and most major economies in Europe reached this point much earlier. The developed world as a whole has now been ageing for around a decade. The 2020s will be the second decade the developed world has been ageing simultaneously. 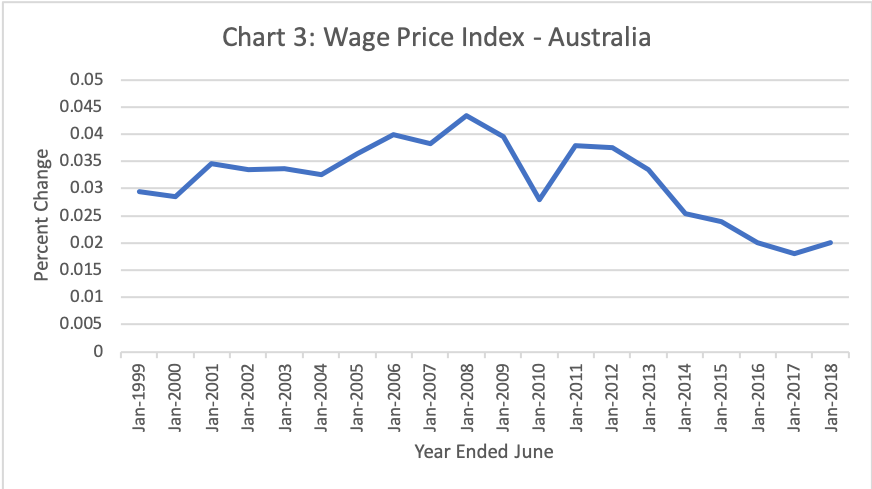 Chart 4 highlights a strong relationship between a declining WAP ratio and weak growth in the wage price index (Pearson Correlation of 0.869 with a 95 percent confidence interval). 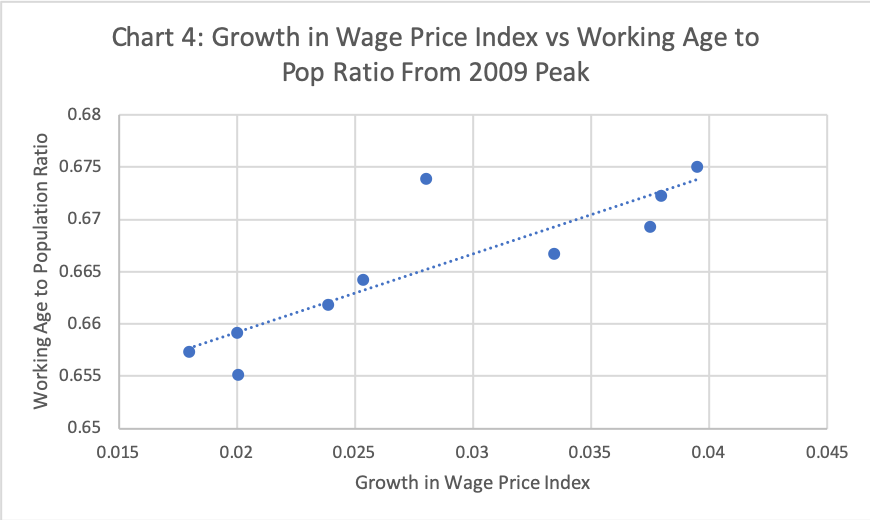 While much of the research anticipates strong wages growth associated with ageing (due to assumed labour shortages), evidence of the last decade across countries such as the USA, UK, Canada and Australia, and earlier for countries in continental Europe as well as Japan, suggests weaker economic growth, weaker productivity growth and weaker household consumption associated with ageing has been having a greater impact on wages than general labour shortages.

The negative impact of a declining WAP ratio is further confirmed in Chart 5 which highlights a steadily declining number of hours worked per month per adult (ie people aged 15+) since around 2011. 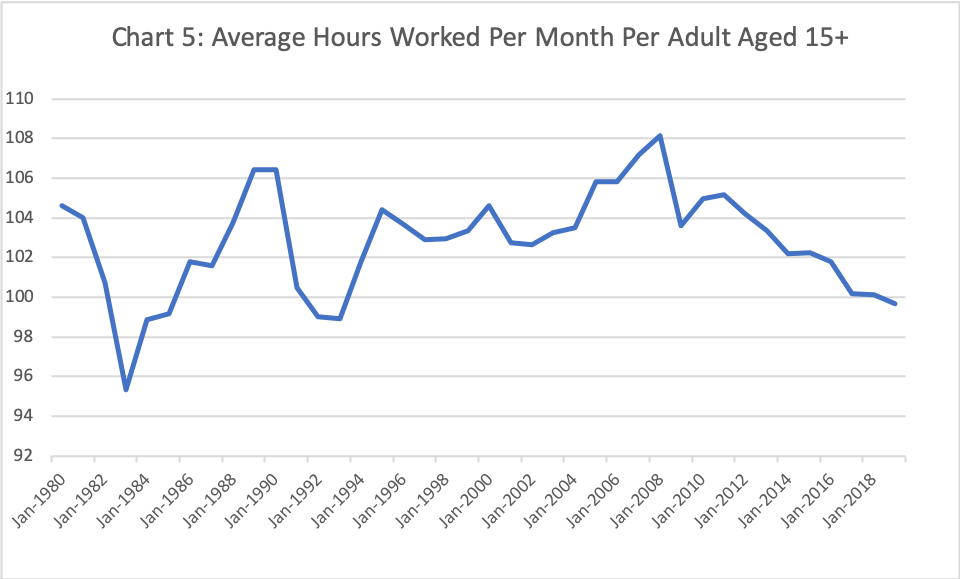 This measure incorporates the impact of unemployment, participation, underemployment and population ageing.

It has been in a slow and steady decline ever since. By June 2019 it had reached 99.7. The first time in 40 years it has been below 100 outside a recession. It will have fallen very sharply due to the coronavirus crisis and should bounce back after lockdown restrictions are removed. But with a falling WAP ratio, it is unlikely to ever return to 100 hours per month per adult. 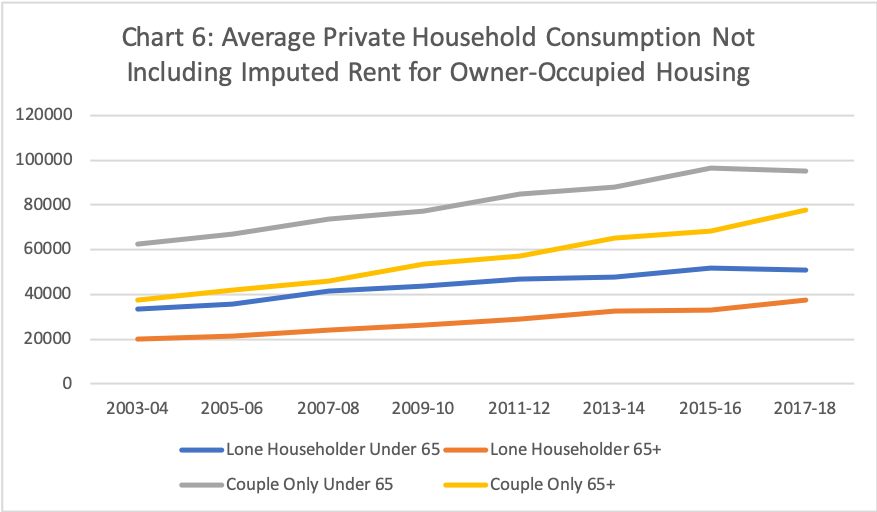 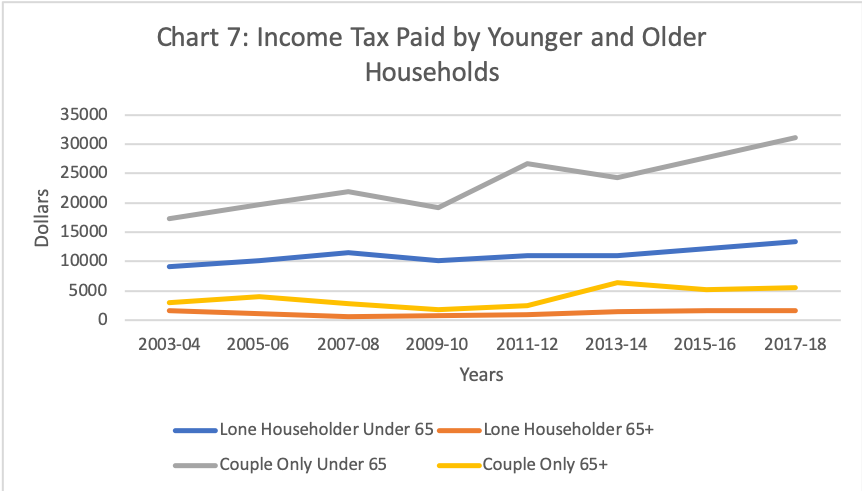 Government budgets and the 2021 Intergenerational Report

A lower fertility rate and lower NOM for the foreseeable future will mean that Australia will age much more rapidly than forecast in the 2015 Intergenerational Report and in the 2019 Budget.

In its 2021 Intergenerational Report, the Government will have no choice but to retreat from its real economic growth assumption of 3 percent per annum for the decade of the 2020s.

[ii] FEYRER, James, Demographics and Productivity, The Review of Economics and Statistics, 89(1), February 2007