In terms of the impact of population ageing, South Australia provides a glimpse into Australia’s future. Over the next decade, ageing will impact Australia more significantly than at any time in our post World War II history. By 2030, all the 5.5 million baby boomers will be past age 65 and predominantly in retirement.

Along with Tasmania, South Australia will lead the way on ageing. It will be the first to experience the harshest impact of ageing on economic growth, employment, household incomes and government budgets, particularly funding for health and aged care services.

Due to higher levels of immigration, Australia’s population has aged more gradually than most developed nations – our working age to population ratio has only been in decline since 2009 when it peaked at 67.5 percent.

But even ten years of ageing has had a noticeable impact. For example, in the decade before our working age to population ratio peaked in 2009 – a period when the baby boomers were in their highest income earning phase and their highest household consumption phase – real GDP growth averaged 3.4 percent per annum. In the decade since 2009, with the early baby boomers going into retirement, and as a result earning less and spending less, real GDP growth has averaged 2.5 percent per annum. In this period, Australia’s working age to population ratio fell 2.2 percentage points to 65.3 percent.

Australia’s working age to population ratio is projected to fall a further 1.9 percentage points to 63.4 percent by 2030 (see Chart 1). 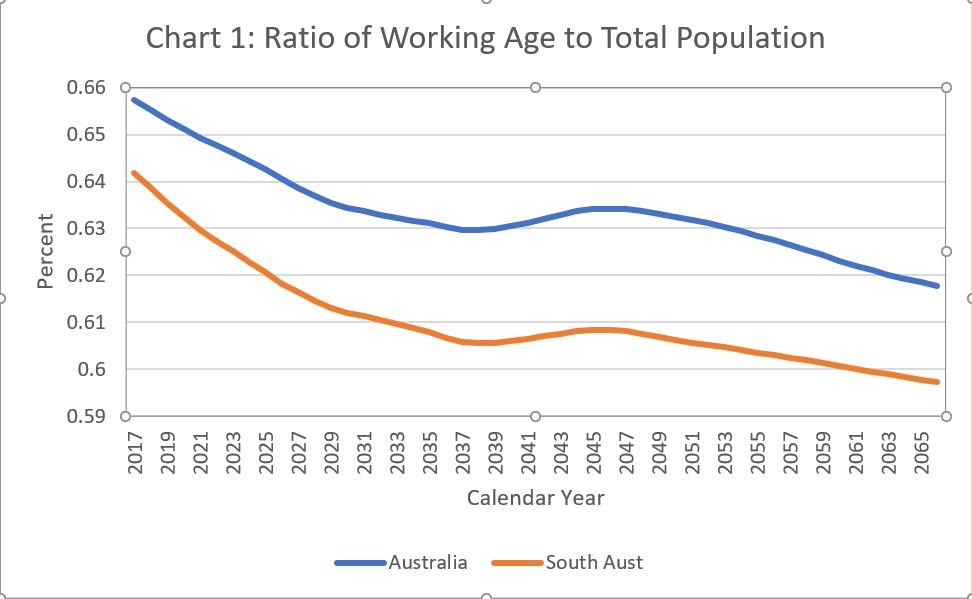 But why is this significant?

From 2025, all the 5.5 million baby boomers will be eligible for the pension phase of superannuation in which most will be paying no tax on superannuation earnings. Some will be getting large franking credit refunds. This will have an increasingly negative impact on tax revenue.

Private household consumption expenditure of the boomers will fall as they age, impacting GST collections. Their take up of health and aged care services and the age pension will rise strongly.

Unfortunately, the Federal Government’s ten year budget and tax plan ignores the impact of this extraordinary phase of ageing. This is particularly dangerous for South Australia as it will experience the consequences of ageing earlier and more severely.

In the 2016 Census, South Australia’s situation compared to Australia as a whole was as follows:

The age structure of SA’s population has led to its two major industry employers being hospitals and residential aged care homes. An ageing population will require both to grow further and be able to attract the required skilled health and aged care workers.

While SA held its own in terms of its share of overseas students in the higher education sector from 2004 to 2011 (9.6%), its national share has since fallen back to 4.6% in 2018. Overseas students are a crucial driver of net overseas migration.

Due to the range of state-specific and regional migration (SSRM) visas introduced by the Howard Government, SA has also attracted a higher than national share of permanent skilled migrants arriving directly from overseas at 11.6 percent in 2018. SA’s share of these migrants peaked at 14% in 2009 but may rise again in 2020 due to the Morrison Government again giving priority to SSRM visas.

Two categories of net overseas migration where SA attracts well below the national average are:

South Australia has had a consistently high rate of negative net interstate migration of between 3,000 and 7,500 per annum in recent years with the largest age cohort loss being people aged between 20 and 34. Its relatively higher rate of unemployment and lower levels of household income compared to the larger states will continue to drive high rates of negative net interstate migration.

But the Commonwealth has been forecasting a strong increase in fertility for about five years. There is very little evidence to support this.

A more likely outcome is Australia and SA’s fertility rate will remain around current low levels, even though these are generally higher than those of most developed countries. 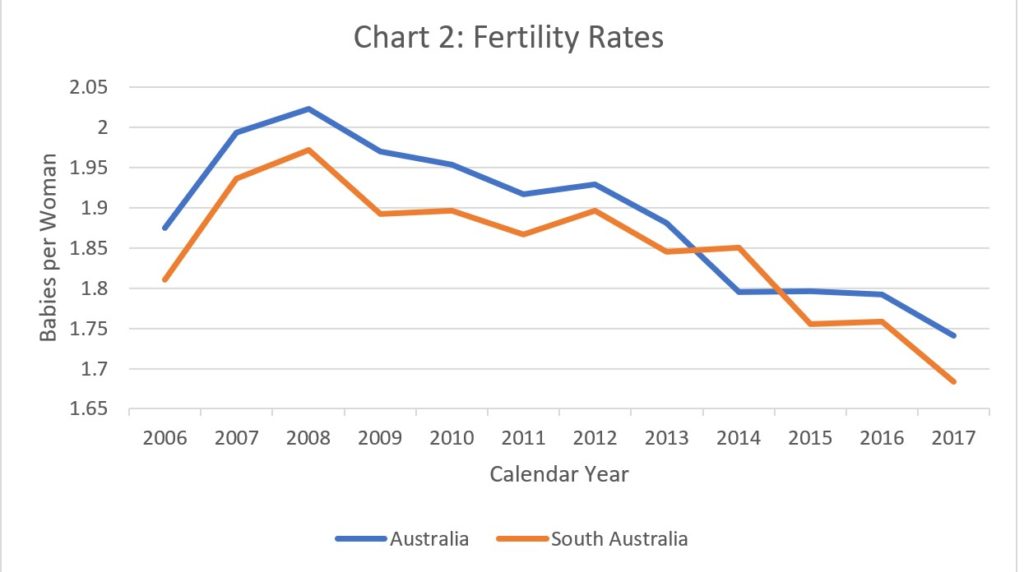 There is no realistic level of net overseas migration and/or a rate of net interstate migration that can stop ageing – SA’s population will continue to age. Higher net overseas migration can help slow the rate of ageing but not stop it. Both the Commonwealth and state governments will need to do more to prepare for this, including preparing the Australian public for the impact of significant ageing.

Pretending ageing will not have a negative impact on economic growth and government budgets helps no one.