The Coalition has just doubled all government debt accumulated since Federation. In under six years. Alan Austin reports.

Australia’s gross debt – updated Friday morning – has just clicked over the magic number of $543,409,430,000. This is exactly double all debt accumulated by every government between Federation and the 2013 election.

That’s right. The Coalition has added more debt in five and a half years than all governments over the preceding 118 years.

There are three stories here. The first relates to profound fiscal mismanagement, the second concerns political hypocrisy, and the third is about the performance of the mainstream media. The latter is probably the lesson which most urgently needs to be learned. And never forgotten.

Australia had accumulated substantial public debt through the colonial period, well before Federation. By 1901 this exceeded £194 million. It kept increasing from there. The well-known chart illustrating federal government debt based on the excellent work of Alan Barnard shows soaring rises during world wars one and two and dramatic falls after the wars and after the intervening depression. But in fact, gross debt kept expanding gradually in pound value – or dollar value after 1965 – but decreased as a percentage of gross domestic product (GDP). 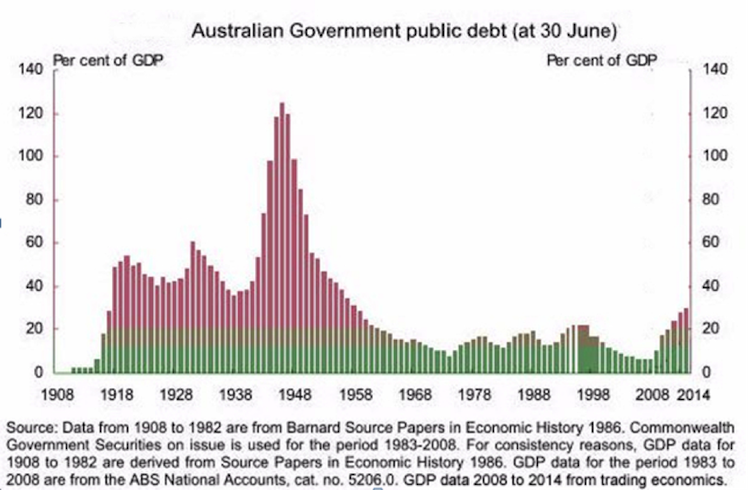 So every government since Federation – except one – has left more gross debt than it inherited. This was not a problem while the quantum was below 25 per cent of GDP – which it was from around 1960 onwards – and provided interest rates were low.

Debt became a pressing issue during the Fraser years when gross debt doubled to almost $40 billion and interest payments soared from $893 million a year to more than $3,000 million. 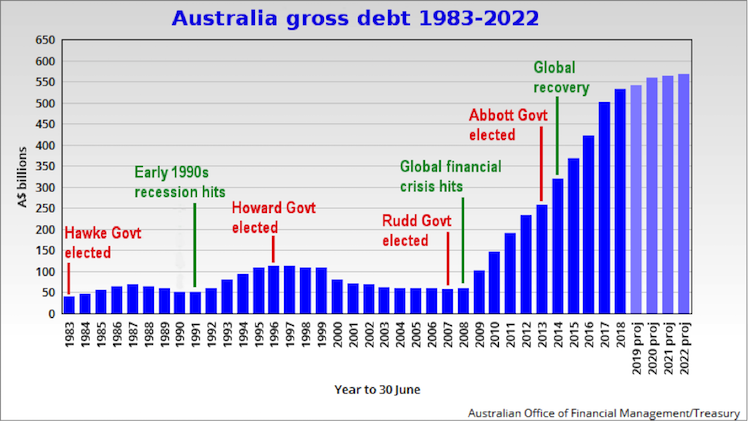 Following the Hawke/Keating Government’s restructure of Australia’s economy, debt was reduced each year from 1987 to 1991 — from $67.2 billion to $48.4 billion. Soon after, the early 1990s global recession required further borrowing, which saw the debt increase again.

But when that recession eased, the economy was set for further reductions, which Peter Costello supervised through most of the Howard period. Thus the Howard Government is the only one to have left less gross debt than they inherited, bequeathing just $58.5 billion to Kevin Rudd in 2007.

Wayne Swan continued to repay the debt in his first year as Labor treasurer, and got it down to a 17–year low of $52.4 billion by August 2008.

Shortly thereafter, the devastating global financial crisis (GFC) whacked the world. This forced all developed countries, except Norway, to borrow heavily for stimulus spending to save their economies.

Australia succeeded remarkably in averting recession, widespread job losses and mass suicides, and did so with relatively little debt. Whereas Canada, the UK, Germany, the USA, Italy, Singapore, Spain and France all increased their gross debt above 80 per cent of GDP, Australia’s ratio was just 16.8 per cent at the GFC’s end in 2013.

In Julia Gillard’s last full financial year, 2012-13, total debt taken on was just $23.4 billion. This was set to fall steadily thereafter. Before the 2013 election, the heads of Treasury and Finance projected the budget to be in surplus in 2015-16, with debt to peak that year before declining.

The Coalition then changed Labor’s settings on both revenue and expenditure and blew out the debt further and further.

By April 2017, the Turnbull Government had doubled the debt Labor took under six years to accumulate – through the worst global recession in 80 years – $213.2 billion.

The Coalition did this in just three years and seven months. During a period of robust global recovery. No pressing need for economic stimulus. And no infrastructure investment or other benefits to show for it.

There was no excuse for this. Revenue plummeted since 2013 as the Government allowed tax evasion to escalate. The total of the debt accumulated is close to estimates of the total corporate tax uncollected.

In contrast, since 2013, Australia has expanded its debt from 16.8 per cent of GDP to 28.8 per cent. That is the highest increase of all 36 wealthy member countries of the Organisation for Economic Cooperation and Development.

The loudest and most oft-repeated promises before the 2013 election were that the Coalition would return the budget to surplus and reduce borrowings.

In his 2013 budget reply speech Tony Abbott was scathing about Labor’s “skyrocketing debt”. He said:

“It’s a spiral, deeper and deeper into debt which is now surging towards $400 billion even on the government’s own figures”.

Abbott’s promises were clear and specific: the Coalition had “… identified $50 billion of savings, for an $11 billion improvement in the budget bottom line and a reduction of $30 billion in net debt.”

So how do they get away with this? This brings us to the third story line.

Throughout the Gillard years and the second, brief, Rudd administration daily newspapers and TV news continually shrieked “Debt spiralling out of control”, and “The budget in freefall”, and “Labor’s debt time-bomb”.

The Daily Telegraph shouted in 2013 that “Julia Gillard’s gift to Australia is massive and growing debt”. The fury continued day in, day out, in The Courier-Mail, the Australian Financial Review, the ABC, the Herald Sun, online outlets and elsewhere.

The ABC claimed the economy was the key issue in the 2013 election campaign and that the “Coalition’s main line of attack on the economy is based on the mantra of ‘debt and deficit’.”

That was when Labor had added $23.4 billion in one year. Now, in contrast, after the Coalition has added an average of $54.4 billion over its last three years, not a peep from Australia’s spineless and mendacious mass media.

The conclusion seems inescapable. Economics reporters and their editors in the mainstream media are paid to conceal what is actually happening in the economy. This is to maintain the myth that the Coalition manages the economy better than Labor. And thereby maintain the tax regime so beneficial for the big corporations.

This article was published by Michael West on the 2nd of March 2019. 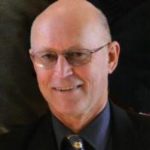