ALAN KOHLER. Coalition’s retreat back to coal-fired power stations and the loony fog

In 2015 Australia’s businesses made the mistake of thinking the Coalition government was serious about tackling climate change, and solemnly lined up to support it….There won’t be any new coal power stations and the lives of existing ones won’d be extended unless the government bizarrely and unnecessarily pays for it. If that happened,it would bring about the final divorce of business and the Coalition and the final retreat by Malcolm Turnbull into the loony fog inhabited by Donald Trump and the coal dancers on the Coalition’s right.

In March, the Department of Prime Minister and Cabinet set the scene with a paper supporting progress towards an agreement in Paris in December.

That was followed by a serious of papers, doorstops and press conferences by ministers and the Climate Change Authority (since gutted) culminating in an August 2015 press release from the Prime Minister, Tony Abbott, announcing Australia’s ambitious post-2020 emissions reduction targets.

By midyear business was all aboard the Tony Abbott express to Paris.

In June 2015, there was the “Australian Climate Roundtable” formed by the Business Council of Australia, including the ACTU, the WWF, the Australian Industry Group, ACF, ACOSS, the Investor Group on Climate Change, the Electricity Supply Association, The Climate Institute and the Australian Aluminium Council, which made a big show of supporting the government’s “two-degree goal” (that is, to limit global warming to less than 2 degrees above pre-industrial levels).

In September 2015, a few weeks after the Abbott statement, there was a joint statement from the CEOs of AGL, BHP, GE, Mirvac, Santos, Unilever, Wesfarmers and Westpac supporting him, declaring: “Climate change is affecting our businesses and the communities in which we operate. We recognise that we have a role to play and we want to play our part.” And of course, they explicitly backed the government’s 2 degrees goal.

But it was AGL Energy, under the new leadership of Andy Vesey, that most enthusiastically linked arms with the Coalition. 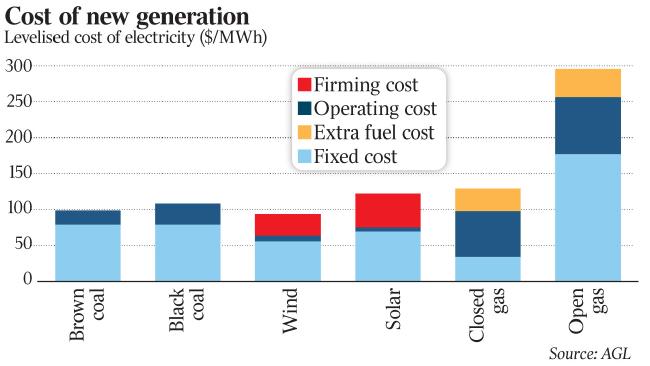 But just a year later Vesey gave notice that Liddell would close in 2022. This week I asked a company spokesman what had changed between 2014 and 2015. The answer: it was the company’s “Greenhouse Gas Policy”, issued in April 2015.

It wasn’t that AGL suddenly discovered the plant was old, or that it had knowingly bought something that had eight years’ life left. AGL had decided to support “the Commonwealth government’s commitment to work towards a global agreement…” as its new policy statement said.

Factories, including power stations, don’t have use-by dates. Vesey and the AGL board had decided that “AGL will not extend the operating life of any of its existing coal-fired power stations”, in order to support the Abbott government’s emissions reduction strategy.

Poor fools. Vesey had just arrived in Australia after 11 years with The AES Corporation in the US, and obviously no one had told him about Tony Abbott.

As it happens, AGL had already made a similar mistake the other way: it finalised the purchase of the Liddell power station in July 2014, at exactly the same moment as the Coalition was ludicrously celebrating the repeal of the Gillard government’s emissions trading scheme legislation — the so-called “carbon tax”.

But what the Abbott government did not do was repeal the Renewable Energy Target.

The result has been a disastrous market distortion in which a market in RET certificates, separate and parallel to the National Electricity Market, has subsidised solar and wind power bidding into the NEM — allowing them to bid in below marginal cost (which for them is zero, so a negative number) and thus outbid coal.

That distortion has hastened the closure of ageing coal-fired power stations, as it was always meant to do. The continuation of the RET in 2013-14 appeared to confirm the Coalition’s commitment to greenhouse gas emissions reduction, countering its frenzied opposition to an ETS.

With the Coalition government subsidising solar and wind so it could outbid fossil fuels into the NEM and making statements supporting an agreement in Paris, closing ageing coal-fired power stations seemed an obvious thing for their owners to do. Origin decided to close Eraring in the early 2030s and French-owned Engie decided to close Hazelwood, pretty much straight away.

And by the way, there was another event in 2015 that didn’t get a lot of attention in Australia, but was also important: the World Gas conference in Paris in June.

That was when the gas industry effectively dumped the coal industry, distancing themselves from their fellow fossil fuel producers and calling for a price on carbon. Speaker after speaker in June hailed natural gas as a relatively clean fossil fuel (relative to coal, that is) and supported global agreement. Coal was isolated.

Backs against the wall, the coal industry fought. Who knows what happened behind the scenes, but during 2016 coal became a right-wing deity, a totem for the conservative faction of the Coalition to dance around. Those who don’t believe in coal are heretics, if not infidels, and there is nothing worse than an apostate, like AGL.

The result was that the bright promise of 2015 was unfulfilled. There have now been eight years of energy policy inaction in Australia because of the Liberal Party’s decision in 2009-10 to politicise it, then to pretend to be in favour, and then to pull the rug out.

And this was all made worse by the sole element of bipartisan climate policy — the renewable energy target.

But everybody knows coal-fired power stations must close if Australia is to meet the 2 degree commitment that everybody agreed to in 2015 — including the Coalition. The task of leadership is to prepare for that, not yearn for coal.

The Australian Energy Market Operator has made it clear the closures can be handled through demand management and some NEM redesign, with even more renewables and batteries, which is what’s happening anyway because that’s what businesses and investors want to invest in.

There won’t be any new coal power stations, and the lives of existing ones won’t be extended unless the government, bizarrely and unnecessarily, pays for it.

If that happened, it would bring about the final divorce of business and the Coalition, and the final retreat by Malcolm Turnbull into the loony fog inhabited by Donald Trump and the coal dancers on the Coalition’s right.

Alan Kohler is publisher of The Constant Investor