‘Here was their spirit’ – the corruption of the Australian War Memorial

Rather than embodying Charles Bean’s vision of a solemn temple of reflection honouring service and sacrifice – ‘Here is their spirit’- over time, the Australian War Memorial has morphed into a theme park of war souvenirs, half-truths and omissions.

The Australian War Memorial arguably has been the most influential institution in shaping our national self-image. For many of us, the ‘Digger’ defines what it is to be Australian. But misguided management by successive governing Councils has seen the Memorial lose its way.

The devastating Brereton report into allegations of war crimes committed by Australian Special Forces in Afghanistan has shattered decades of trust. Intense scrutiny is about to descend on every part of the military domain. Our most revered national shrine, the Australian War Memorial, should not escape attention.

Immediately following the release of Brereton’s investigation, former Defence Force chief Chris Barrie called for the Council of the AWM to be ‘fundamentally changed’ and for the Afghanistan gallery to be closed off. That gallery holds a special interest for the Council’s current chair, Kerry Stokes, whose (curious to some of us) obsession with the Special Air Service Regiment has been well-documented.

We can be confident that the great majority of Special Forces who have fought in Afghanistan have done so with honour and courage. It is a tragedy that the many good soldiers are likely to be the worst-affected by the disgrace brought about by the rotten few.

It is self-evident that character is built on truth. It is less self-evident when ‘history’ becomes ‘propaganda’. In the wake of this disgrace, it is clear that the half-truths told in the AWM’s Afghanistan gallery have not served the best interests of either the good soldiers or the Australian public.

Thus, for example, when it opened, the gallery told us that the Australian Defence Force had ‘built schools, roads and hospitals [and] mentored the fledgling army of a new democratic nation’. But it didn’t tell us that many of those programs were collapsing as the US-led armies withdrew, that about 80 per cent of all development money had been stolen by Afghani officials and criminals, that the ‘democratic’ government our troops were propping up was one of the most corrupt in the world, that the Afghani Army would probably disintegrate, and that the war had destabilised every country in the Middle East.

Rumours of possible criminal behaviour by Australian forces were circulating several years before the gallery opened. But you wouldn’t have found any mention of that on the story boards. Nor did the gallery confront visitors with the ‘unfathomable depravity’ of war.

The same observations can be made about the Vietnam gallery, which presents only part of the story of a conflict which most informed analysts now regard as having been unjust, unlawful, unwarranted, and an utter disaster, and which was stained by shocking war crimes by our American allies.

The corruption of values inherent in this telling of half-truths has been compounded by the continual expansion of the AWM’s displays of the instruments of war. From a modest beginning, those displays have grown inexorably. Tanks, ships, aircraft, guns, knives, radars, videos, sound and light shows, etc, etc – much of the Memorial has been turned into a vast theme park. And don’t forget to buy your souvenirs as you exit via the shop.

It’s true that the Memorial’s charter includes the requirement to educate Australians about our war history, but that’s not the same thing as gratuitous exhibitions of military hardware.

Currently, there is heated debate over yet another proposed expansion. Seemingly either unable to resist pressure from interest groups (veterans, politicians seeking favour with powerful veterans’ associations), or wilfully unaware of the meaning of ‘here is their spirit’, the Council has gained government support to spend $500 million on an enormous structure to house even more hardware.

Professionally curated collections of the memorabilia of war are important social and historical records. But a museum is not a memorial, and a memorial should not become a museum. Perhaps some of the $500 million could be used to separate the theme park from the memorial by establishing an Australian Military Museum, in a different location with a different purpose.

None of this is to question the sacrifice of our service-men and -women, but it is to question how their story is told and its effect on our national identity.

The centrepiece of the AWM always has been and always must be the Hall of Memory and the Tomb of the Unknown Australian Soldier. In those quiet, respectful spaces, the feeling of solemnity and reflection is profound. In truth, that’s all the AWM needs, and that’s all it should be. ‘Here is their spirit’.

A disturbing connection can be made between the preceding narrative and the refusal of successive governing Councils to recognise the most consequential war ever fought by Australians. That war was, of course, the Frontier Wars, fought from 1788 to the 1920s between Indigenous Australians and an invading coalition of white settlers, militia, police, and colonial soldiers.

Deniers of the Frontier Wars, including most notably a former director of the AWM, Brendan Nelson, assert that it was not a ‘real’ war, an extraordinarily arrogant and insensitive viewpoint. Most of our leading historians disagree, and have no doubt that the first Australians’ defence of their land, of their rights, and of their values was conducted in the manner of a ‘war’, a conclusion endorsed by many contemporary senior military commanders.

This ‘war for Australia’ lasted 140 years and caused 20,000 to 30,000 Aboriginal deaths, perhaps many more. By comparison, during the thirteen years of the morally corrupt and strategically disastrous Vietnam War, just over 500 (white) Australians died. Yet Vietnam is honoured in the AWM and is the subject of regular, large, government-funded commemorations.

Do members of the Council of the AWM think that the first Australians didn’t have ‘spirit’? I don’t believe so, but based on the bare facts it wouldn’t be an unreasonable inference.

Council members predominantly have been people either with a military background, or with a passion for the Anzac myth and sufficient political influence to be rewarded with a seat at the table. Clearly the Council must be informed by military experience; equally clearly, its thinking should represent a far broader understanding of what it means to be ‘Australian’.

The corruption of the AWM’s vision can be seen as a contributing factor to the toxic culture that ultimately infected our combat forces in Afghanistan. Any path to redemption must, therefore, include reforming the Memorial. Three relatively straightforward changes would have an immediate, positive and far-reaching effect. Cancel the $500 million extension; replace the current Council with a representative selection of Australians; and tell the true story of our war experiences.

Perhaps in time it might again be said of the Memorial, ‘Here is their spirit’.

Alan Stephens is a visiting fellow at UNSW Canberra. He served in Vietnam with the RAAF. 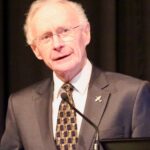