In a key paper titled “Scientific reticence and sea level rise” (https://pubs.giss.nasa.gov/abs/ha01210n.html) (2007)  James Hansen, the renowned climate scientist, is critical of what he regards as major underestimates of the magnitude and pace of global warming, as further elaborated in the article “How the IPCC Underestimated Climate Change: Here are just eight examples of where the IPCC missed predictions)” (https://www.scientificamerican.com/article/how-the-ipcc-underestimated-climate-change/) (Glen Scherer, 2012). It is only more recently that the IPCC has upgraded its climate projections, stating “Human activities are estimated to have caused approximately 1.0°C of global warming above pre-industrial levels, with a likely range of 0.8°C to 1.2°C. Global warming is likely to reach 1.5°C between 2030 and 2052 if it continues to increase at the current rate”, and “Warming greater than the global annual average is being experienced in many land regions and seasons, including two to three times higher in the Arctic. Warming is generally higher over land than over the ocean.

Whereas IPCC reports are based on authoritative peer reviewed scientific journal publications, the summaries for policy makers tend to underestimate the scale and pace of the consequences of global warming, currently induced by a rise in greenhouse gas at rates unprecedented since about 56 million years ago (Cenozoic mean greenhouse gases and temperature changes with reference to the Anthropocene, 2016 https://onlinelibrary.wiley.com/doi/abs/10.1111/gcb.13342).

A prime example is the question of sea level rise, estimated by the IPCC 2007 to reach 50 cm by 2100 (https://www.ipcc.ch/publications_and_data/ar4/wg1/en/faq-5-1-figure-1.html). At that stage the IPCC stated no reliable estimates existed for the breakdown of the Greenland and Antarctica ice sheets, despite reports of increased Greenland melt in 2005 http://cires1.colorado.edu/science/groups/steffen//greenland/melt2005/). This is contrasted to sea level rise of several meters projected by James Hansen, consistent with paleo-climate observations of a rise of sea level of 7 – 9 meters during the Eemian, 125 thousand years ago, when temperatures were similar to current temperatures. This implies lag effects of ice sheet melting and a major sea level rise, possibly this century. Recently the IPCC updated its estimates to a maximum of 1.0 meter by 2100 according to model RCP8.5 https://www.ipcc.ch/pdf/unfccc/cop19/3_gregory13sbsta.pdf.  whereas according to NOAA sea level may reach a maximum of 2.5 meters by the end century relative to the year 2000, getting close to the level suggested by Hansen. 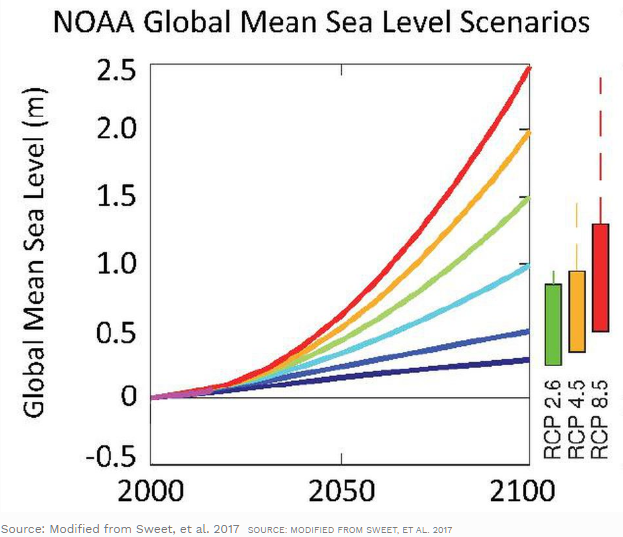 According to Hansen and a large group of climate scientists (2016) (https://www.atmos-chem-phys.net/16/3761/2016/)  the flow of cold ice melt water from Greenland and the Antarctic ice sheets cause ocean surface cooling in the Southern Ocean and North Atlantic while lower latitudes are warming, driving more powerful storms.

These authors state: “Continued high fossil fuel emissions this century are predicted to yield (1) cooling of the Southern Ocean, especially in the Western Hemisphere; (2) slowing of the Southern Ocean overturning circulation, warming of the ice shelves, and growing ice sheet mass loss; (3) slowdown and eventual shutdown of the Atlantic overturning circulation with cooling of the North Atlantic region; (4) increasingly powerful storms; and (5) nonlinearly growing sea level rise, reaching several meters over a timescale of 50–150 years. These predictions, especially the cooling in the Southern Ocean and North Atlantic with markedly reduced warming or even cooling in Europe, differ fundamentally from existing climate change assessments. We discuss observations and modeling studies needed to refute or clarify these assertions. 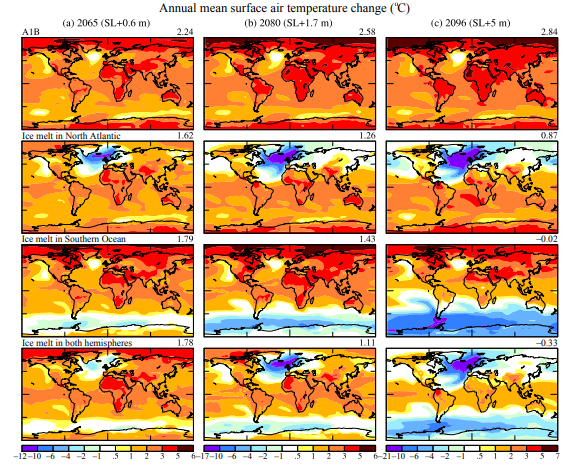 There is no evidence much is being done by world governments and parliaments to avert such calamity.