ANDREW GLIKSON. Silence over the acceleration of global warming.

“To ignore evil is to become an accomplice” (Martin Luther King)

If there is a single critical issue science has ever conveyed, it is that altering the composition of the Earth’s atmosphere can only bear fatal consequences for nature and humanity. It is estimated that, to date, some 150,000 to 400,000 people world-wide have perished each year due to the direct and indirect effects of global warming (https://newrepublic.com/article/121032/map-climate-change-kills-more-people-worldwide-terrorism; https://www.scientificamerican.com/article/global-warming-and-health/), including for example 1833 in New Orleans, possibly 5000 in Porto Rico, 6329 by typhoon Haiyan in the Philippine. The list goes on. While these events have been documented in detail, the silence in most of the mainstream media regarding the connection between global warming on the one hand and the rising spate of hurricanes, storms and fires on the other hand, is deafening. 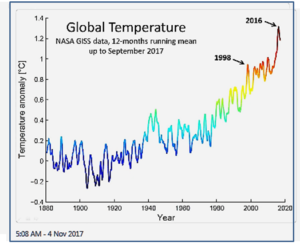 Even though climate science clearly indicates the rise in atmospheric carbon and temperature are responsible for these developments (https://johnmenadue.com/andrew-glickson-hurricanes-and-megafires-abound-but-dont-mention-the-words-climate-change/), only rarely do media reports of extreme weather events include the terms “climate change” or “global warming”. By contrast, false expressions such as “one in 100 years event” are common. Many people are unaware the world around them is changing due to carbon emissions.

Vested interests and their political mouthpieces have been telling untruths regarding the causes and consequences of global warming. With few exceptions the mainstream media continues to either propagate half-truths, or remain silent, or deal mainly with related economic issues, as if anything like the present economy could survive under +4 degrees Celsius above pre-industrial conditions. Whenever the term “future” is expressed in the media and in Parliaments, it is rare that a caveat is made regarding the effects of global warming, given the currently 2 to 3-fold rise in extreme weather events.

Climate-related articles and letters are regularly ignored. In August 2017 an open letter to the Prime Minister regarding the climate crisis, signed by 200 scientists, was almost totally shunned by the mainstream media https://thebeeliargroup.files.wordpress.com/2017/02/open-letter-to-the-australian-pm_17-10-2017_including-figures.pdf).

Only little or no information is given in the media regarding what the future holds under +2 or +4 degrees Celsius, projected by the IPCC to occur within this century. With exceptions, nor does most of the mainstream media report the global consequences of a nuclear exchange. In this regard, while there is no lack of pejorative terms in the press indicting various countries, the promotion of efforts at reaching peaceful solutions between rival nations appears to be rare, conditioning the public to looming scenarios of a WWIII.

Rarely does the ABC, “Australia’s Most Trusted News and Analysis”, say too much about the full consequences of the rise of atmospheric CO2 from 280 ppm to currently 407 ppm and toward 500 ppm later in the Century, at present at a rate of +2 to +3 ppm per year. Nor is the nuclear peril, given too much exposure by the major panels. This includes “4-Corners”, “7.30 Report”, “Breakfast”, “Q and A”, “The Drum” and  Matter of fact” programs, the latter claiming “facts matter more than opinion” and “In a world awash with bogus news, dubious sources and noisy opinions” the program “brings Australian audiences the essential context they need to separate facts from fiction on the important issues of the day.”

Climate science and scientists are rarely represented on media panels, by contrast to science infotainment programs where attractive celebrities promote space travel to the planets and beyond. Can the climate crisis be tackled in time if much of the mainstream media declines to expose the critical facts and their consequences?