The road to 2oC and beyond: IPCC warnings of extreme global warming.

Scientists of the Intergovernmental Panel on Climate Change (IPCC) indicate that global temperature rise of 1.5°C above pre-industrial temperatures would constitute a threshold the planet cannot cross without suffering the worst effects of climate change. Yet according to the U.N. report, mean global land-sea temperatures have already risen above 1°C and the planet could pass the 1.5°C threshold as early as 2030 if greenhouse gas emissions continue at the current level and no effective CO2 down-draw measures takes place. These projections underestimate what is happening in the atmosphere-ocean-land system since, due to amplifying feedbacks from desiccating land, warming oceans, melting ice, methane release and fires, no temperature limit can be specified for global warming. The Paris agreement, which focuses on limits to emissions, hardly acknowledges the essential need to down-draw atmospheric carbon which has already reached >450 ppm CO2 + Methane equivalent. 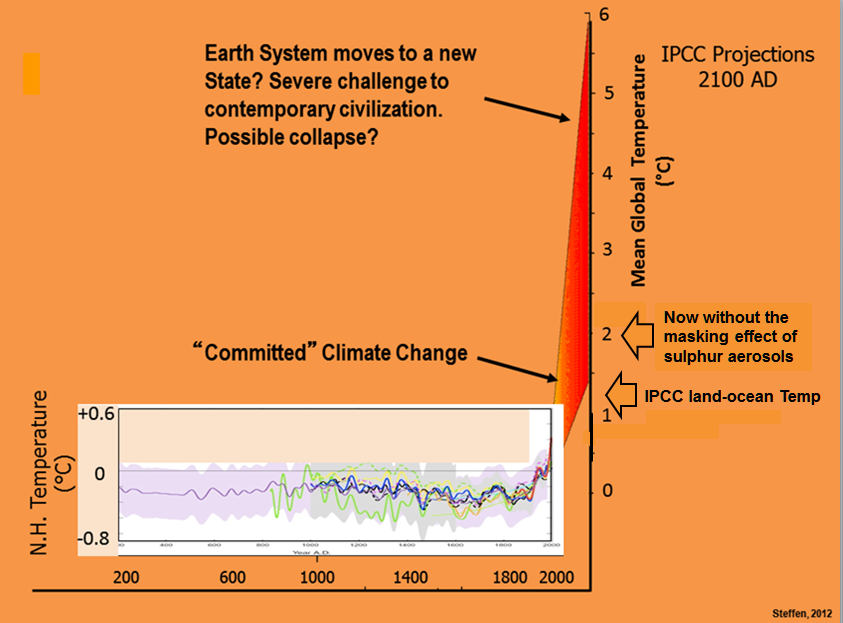 Climate science is a complex discipline, yet politicians, economists and journalists appear to believe they understand it, rushing to conclusions based on partial knowledge or ignorance. Lately government members have been referring to climate science as an “ideology”.  Looking at the plethora of misconceptions regarding the accelerating climate crisis in the atmosphere-ocean-land system, it is not clear where to start.:

In Australia, it is claimed as if carbon emissions constitute not much more than 1 percent of global missions. However, emissions from coal and gas has been increasing (https://www.theguardian.com/business/grogonomics/2018/jan/09/australias-emissions-are-rising-its-time-for-this-government-to-quick-pretending). Including exports Australia produces near 4 percent of global emissions, all of which goes to the same atmosphere.

Rarely has the full extent of the climate catastrophe been conveyed by the mainstream media, including the ABC, as contrasted with the proliferation of pseudo-science infotainment programs, where attractive celebrities promote space travel. Rarely do the major panels include scientists.

Given a 2 to 3-fold rise in extreme weather events, signs of the impending global climate tipping points are everywhere, from hurricane-hit Caribbean islands and southeast US, to cyclone-ravaged and sea level rise-affected southwest Pacific islands, to flooded south Asian regions such as Kerala and Pakistan, to fire-devastated regions in southern Europe and California, to the Australian and east African droughts. The list goes on. To date it is estimated some 400,000 deaths are linked to climate change each year (https://newrepublic.com/article/121032/map-climate-change-kills-more-people-worldwide-terrorism)

Yet the warnings are shunned, in particular in rich western countries. Whenever the term “future” is expressed in the mainstream media and in Parliaments, it is rare that a caveat is made regarding the effects of global warming, Should there be a future investigation of those who have been, continue to, promote and preside over the rise in carbon emissions, with the consequent climate calamity, this would be recorded by survivors as the greatest crime ever perpetrated by the Homo “sapiens”.

“To ignore evil is to become an accomplice” (Martin Luther King)