In a recent ‘Eureka Street’ article, I remarked that in the Catholic Church clericalism is a pejorative term. I tried also to identify some of the attitudes and behaviour associated with people regarded as clericalist. The article sparked a lively conversation. 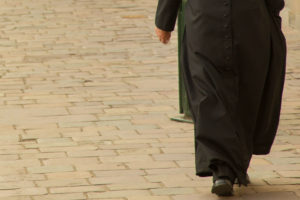 Some contributors criticised me for focusing on individuals and not on the more insidious culture of clericalism. The criticism was justified, and in this article I shall reflect on the culture and its byproducts.

As a culture clericalism displays a world view in which the Catholic Church is a self-sufficient world. Its security, reputation and internal relationships are the centre of attention. Within the Church relationships are hierarchical, and the difference between grades is in practice seen as more important than what Catholics have in common.

The relationships are also often authoritarian: bishops and priests are fearful of Rome, formal in their relationships with one another, and priests are prescriptive in their relationship to the laity. Clergy feel no need to consult the laity in matters of liturgy, finances and policy. The boundaries between the Church and the world outside are strongly marked, as are the boundaries between faithful and unfaithful Catholics. In all these respects clericalism is a culture of control that privileges secrecy.

They are also relationships between people: both those between individuals and especially those mediated through institutions. The latter include forms of address, of remuneration, of formation of children and adults, of the disposition of space, of processes of involving people in decision making and governance, of customs, of imagining the history of parish, diocesan and national church.

The institutional relationships are particularly important because they are often simply taken for granted as necessary and inevitable. They shape what participants see and how they see it. They also create patterns of expectation of how clergy and laity will speak and behave to each, will express or conceal disagreement, respond to injustice, accept direction and view the outside world.

“An authoritarian and controlling network of relationships of this kind generates fear, timidity and a disengagement that can be rationalised as virtue.”

In an undiluted clerical culture (which of course does not exist) all bishops will automatically follow Roman instructions and all priests will be formed to obey their bishops unthinkingly. They will also be a reliable channel for communicating to the laity instructions by the Pope and Roman officials about liturgy, dress and ethical issues. Priests and bishops will find advancement by being reliable and unquestioning and by resolutely defending the Church and its interests.

The laity will be formed to obey their authoritative parish priests and to be silent about concerns they may have with their behaviour. If they confront the clergy they will be seen as unreliable; if they leave the church their dereliction will be seen to have justified the clerical culture.

An authoritarian and controlling network of relationships of this kind generates fear, timidity and a disengagement that can be rationalised as virtue. For bishops, priests and laity to act in ways that conflict with the norms of their culture will require courage and perseverance.

In practice many Catholics, both clergy and laity, have not accepted these expectations. They question, they confront, they represent, they talk together, they disagree. Any network of relationships is mercifully full of holes and of disconnections. Even a strong clerical culture does not control everybody’s behaviour.

For that reason it is difficult to assess the precise part played by clericalism in criminal behaviour, including clerical sexual abuse, and its cover up in the Catholic Church. Many elements of complex relationships are involved. I am not persuaded that there is a strong causal correlation between the culture and offending. Some serial abusers seem to have been poster boys for this culture. Others seem to have strongly rejected it.

A stronger case can be made that clericalism enables such crimes as sexual abuse and theft to be covered up and for criminal actions to be repeated. Deference and timidity in the face of authority make it more likely that lay people will turn a blind eye to signs of criminal behaviour by priests or people employed by the church. The desire to protect the reputation of the church also makes it more likely that a bishop will place the reputation of the church above the welfare of people affected by crime, and so allow offenders to move from one parish to another where they can reoffend.

Regardless of whether clericalism can be proved to be causally linked to clerical crime, however, such a culture certainly shapes a network of stunted relationships that are deficient whether judged by human or Christian values. It will inevitably produce poor fruit.

This article was first published in Eureka Street.