South Korea expects to create 600,000 new “quality jobs” by 2026 thanks to fifth-generation, or 5G, mobile technologies, and hopes to leverage its first-mover advantage in the sector globally, a senior government official said on Monday.

But, he admitted that there is no specific data on how many jobs 5G will obliterate.

5G transfers data 20 times faster than existing 4G networks, and its latency, or lag-time, is one-tenth that of 4G. While the first industrial revolution was founded upon steam power, the second on electric power and the third on computing power, 5G is seen as a key component of the “4th industrial revolution” – the creation of data economies leading to the digitization of entire economies. 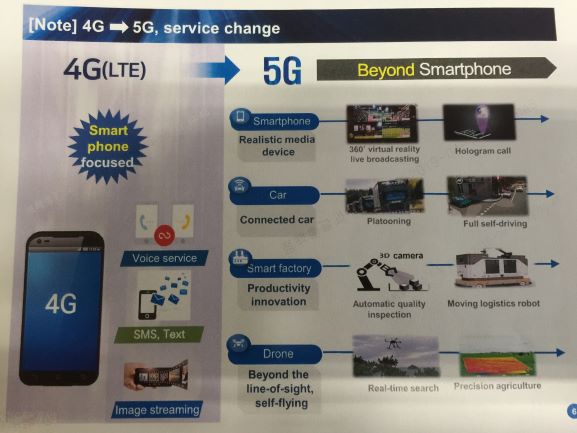 The potential upgrade from 4G to 5G, in a slide from the South Korean Ministry of Science and Technology. Photo: Asia Times

Ahead of the game

“5G is an opportunity for a new leap for Korea, following CDMA and high-speed internet,” Vice Minister of Science and Technology Min Won-ki told foreign reporters on Monday.

In the early 1990s, Korea leveraged its small landmass and densely urbanized population to lay what was arguably the world’s best nationwide broadband infrastructure. That national advantage was further buttressed by the adoption of the advanced CDMA mobile telecoms standard, rather than the more widely used, but more basic, GSM format.

Competitors are also moving into this arena. China will commercialize a 5G network this year, as will Japan, while one US carrier, Verizon, has already established a network, but only in small parts of two cities. Given this, Korea is pre-positioned to lead the field.  For example,  officials of leading telco SKT told Asia Times that Deutsche Telecom will visit Korea in June to examine its early 5G operations.

Citing Korean research, Min asserted that by 2026, 5G will be worth $1.02 trillion globally. Korea hopes, over the same period, to seize some 15% of the market, he told foreign reporters on Monday. 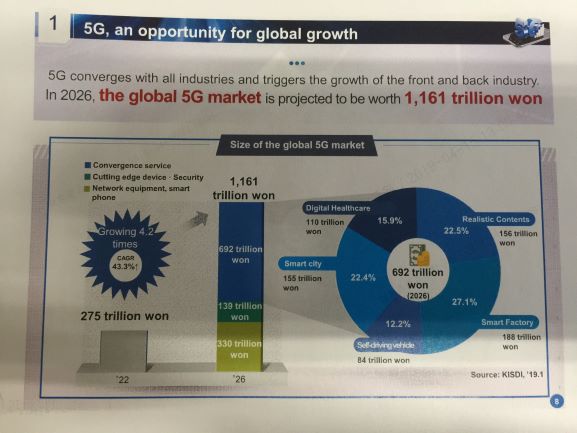 The global impact of 5G, in a slide from the South Korean Ministry of Science and Technology. Photo: Asia Times

Korea seeks to lead the world as a test-bed and first mover in 5G and its spin-off applications. “We are more focused on the best, not the first – we have had enough firsts!” Min said. “Now, we hope to use this infrastructure to make our industries the best in the world.”

In his presentation, Min predicted that 5G will enable a wide range of convergence industries. These include new forms of media for smartphones, such as virtual reality and holograms. Connected cars and autonomous driving will be enabled, as will smart manufacturing, such as automated quality control and logistics robot transport solutions. Drone technology will also be empowered, enabling not just remote delivery, but also “precision agriculture.”

In the early stages, the government will promote VR-AR devices (from this year); 5G-based wearables from 2020, and cloud robot platforms, also from next year, Min explained.

Assisting industry, it will also pursue the early commercialization of “realistic” content – such as hologram competitions; digital healthcare – such as the application of related technologies in ambulances; ‘smart factories’, such as real-time automated quality inspection and logistic robots; autonomous vehicles, such as shuttle buses and mobility for vulnerable transport; and ‘smart cities’, such as disaster handling and road-safety nets. 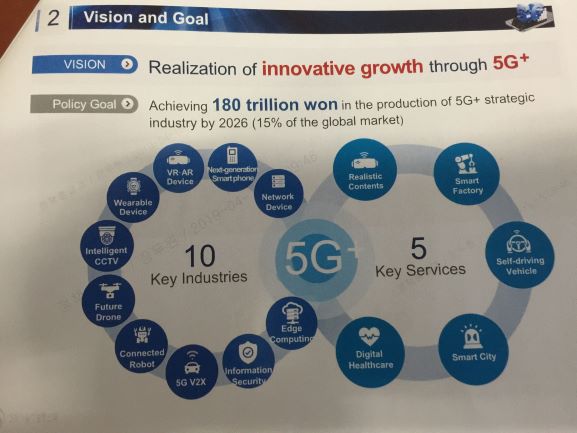 Which industries and services will rise to the back of 5G? A projection in a slide from the South Korean Ministry of Science and Technology. Photo: Asia Times

Seoul will employ tax incentives to promote related sectors, and has created 13 test-beds nationwide. Related educational policies will be enacted, and assistance to SMEs will be supported to implement 5G technology.

But with 5G enabling ‘smart factories’, drone delivery services, precision agriculture and driverless vehicles, Min acknowledged that the technology could be as destructive in jobs terms as it could be creative. “This is not a matter just for the Korean government, other major OECD countries all are addressing the job displacement issue, especially in relation to the platform economy,” he said.

How many jobs 5G will obliterate is unclear. “For 5G specifically, we focused on job creation, we did not do an analysis on job loss,” Min admitted.

Although, as noted, Seoul has already listed a range of sectors and services it expects to benefit, adding to the headaches of those wonks and bureaucrats tasked with devising policy is the difficulty of predicting exactly what kind of services will emerge.

“We did to expect new jobs in the entertainment sector, but they were created when new technologies came to the market,” Min said, referring to previous mobile technologies. “But we can make a fair guess that we will see a convergence between manufacturing and service … but there will be losses in manufacturing and operational jobs.”

Even so, he noted that “we believe in the potential of the technology, of new technologies, to create new jobs.” To assist that process, the government is creating supplemental educational programs aimed at the sector.

Korea is highly praised for its hardware, but software factors have endured problems at times.

For example, the country boasts a superb digital infrastructure, but suffers from highly bureaucratic regulations and related systems regarding online banking and shopping. It also takes a heavy-handed approach to online censorship on issues ranging from North Korea to pornography.

Korea’s powerful tradition of street politics can also be an impediment. Seoul bowed to vested interests by shutting down a popular Uber service, which had particularly helped to relieve pressure on public transport in late-night entertainment zones where taxis are scarce, after a demand from the cabdrivers’ lobby.

Min admitted that, given related issues, regulation needs to be on target. To that end, a “regulatory sandbox” has been created to pressure test 5G regulations and systems.