ANGUS WHYTE. A farmers’ perspective on the drought.

As someone who is dependent on Mother Nature for a living, climate is very much a “front and centre” issue for all farmers.  I graze livestock on semi-arid, native rangeland pastures in western NSW; the numbers we graze is dependent on the amount of pasture we grow, which of course relies on sufficient rainfall. Here’s what I think about the drought. 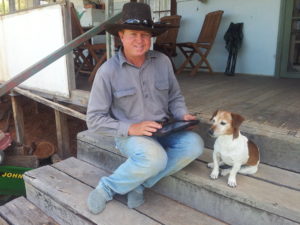 There is no doubt to me that the climate is changing and extreme weather like floods and droughts is getting worse. It’s becoming hotter.  This makes farming more complex, increasing our risk, which also increases our cost of production. But it’s not the whole story. The natural ecosystem isn’t valued. While the beauty of the land may be appreciated intrinsically, as there is no price tag attached to our native flora and fauna, nor the ecosystems that they support, so their value is diminished in the eyes of those who have the power to make a difference.

Scientist and author Fred Provenza said, “The environment is very complex, in fact the more complex the better”. What he meant I think is that a lack of diversity is not a good thing. But many of our farming systems are set up for efficiency to take precedence over diversity. Improved pastures and single crop plantings for example were developed to increase production and reduce costs. However, the lack of diversity means farming practices are often unable to cope with temperature and moisture fluctuations.

The argument that as a country Australia is too small a player to have an impact, is a real cop out.  Should we not pick up litter because picking up a cigarette butt or a lolly wrapper will have negligible impact?  We have to start somewhere, and it will only become more difficult not easier.

Certainly, reducing emissions is key, with renewable power such as solar and wind, now competitive, the cheapest form of new energy and producing zero greenhouse gas pollution. The timing is very good. If we keep more carbon in our soils, this increases water-holding capacity while enabling better cycling of carbon, and so increasing production.

While minimising emissions we should look into new farming systems that encourage diversity and can cope with climate variability. This will mean improving the groundcover of our landscape, cultivating green plants year-round, increasing species diversity, improving the water holding capacity of our soils and other on-farm water efficiency improvements.

To do this requires a complete revision of how we view and value our world; a reclamation of those shared community values that sees the preservation of the natural environment as “not negotiable” and those that live, work and prosper from it as mere caretakers for future generations. The problems besetting the Great Barrier Reef are a case in point. One of those problems can be traced to the agricultural and mining sector. The runoff of chemicals and nutrients into the ocean is polluting the reef. Communities working together can minimise that pollution, absorbing increases in the cost of production borne by the whole community with the satisfaction of knowing that the health of our most important natural icon is preserved. And switching to renewables and storage technologies can help address the greatest challenge to the reef – climate change.

Another driver to change would be a different view on decision making, whereby no decision, i.e. status quo, is viewed by our community as the worst possible choice.  Currently there is no incentive to make decisions (especially around our natural resources) because if it turns out to be poor, you may be open to legal action.   A poor decision can be reversed by a better decision, no decision leaves everyone wondering; “how did we get to such a bad place”.  A focus on healthy environment may just give us all a clear goal or outcome with our lifestyle and production systems.

We have to start viewing our natural assets as more than just “cash cows”; and we have to diversify the way our land is used and change the way it is managed, building resilience in a changing climate.  Many will put up barriers such as “where will the money come from”, or “production will decrease so much it will be unviable” rather than looking at the opportunities that improving the resilience of farming will bring.

This is also an intergenerational issue. Failure to act on climate change, to preserve the land, water and air that farmers reply on to feed the nation is not an option if we are to have a legacy for the next generation of farmers.

With a clear agreed direction, I’m certain these and many other barriers can be overcome, we can then move forward to a much healthier and resilient future. One that we can be proud of.

Angus Whyte is a Wentworth grazier and member of Farmers for Climate Action. Follow him on Twitter: @GusWhyte