JAKE LYNCH: Anti-Zionism is not anti-Semitism 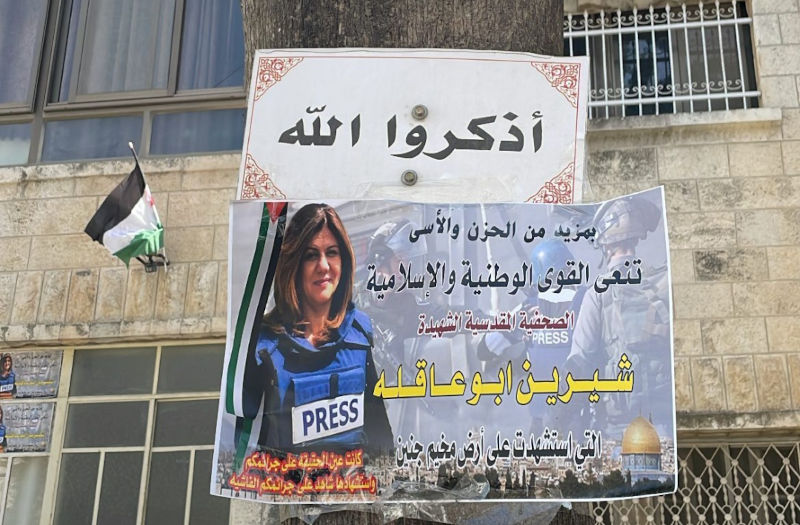 The murder by an Israeli sniper of the Palestinian Al Jazeera journalist Shirin Abu Akleh, and the police attack on mourners at her funeral, are not incidental to Zionism, but integral to it. The ‘Green Line’ that bounds the territory the rest of the world regards as belonging to Israel is purely provisional, with no formal border ever having been announced or acknowledged..

Jenin, the town on the Palestinian West Bank where the killing took place on May 11, is earmarked for eventual Jewish settlement and ascendancy as part of an ongoing expansionist campaign across much broader horizons. Palestinian resistance is a frontline against the enactment of God’s promise to Abraham: “unto thy seed have I given this land, from the river of Egypt unto the great river, the Euphrates”.

This began to be interpreted in literal rather than purely spiritual terms in the late 19th century: an era when nation states were forming, either by agglomeration – as with Italy and Germany – or budding off from blocs established through conquest in previous centuries.

At one end of the Ottoman Empire, Bulgaria, for instance, won independence following a Russian-led war in 1877-8. For the other end, in Palestine, an Austro-Hungarian journalist and playwright, Theodor Herzl, published a proposal for a Jewish State.

For Israel’s supporters in western political circles, the attack on Abu Akleh’s funeral was hard to swallow – Labor shadow foreign minister Penny Wong, and US Secretary of State Anthony Blinken both condemned it. But no inconsistency is perceived between such criticism of a specific violent incident, and the violence intrinsic to Zionism itself.

The past year has seen the emergence of a consensus among expert observers, chronicled in a series of evidence-rich reports, that Israel’s treatment of Palestinians amounts to the internationally recognised crime of apartheid.

Again, this is integral to Zionism, not incidental. The report by Amnesty International notes: “Since its creation, the Israeli state has enforced massive and cruel land seizures to dispossess and exclude Palestinians from their land and homes”, thus rendering them “a group with perpetual lesser rights”.

The pushback from Israel and its lobby groups around the world has seen no attempt to refute such findings. Rather, the tactic is to block discussion by equating such thoroughgoing criticisms with anti-Semitism.

Central to this tactic is the definition of anti-Semitism circulated by the International Holocaust Remembrance Alliance, a German-based intergovernmental organisation whose avowed purpose is “to strengthen, advance and promote Holocaust education, remembrance and research worldwide”.

Crucially, the IHRA definition blurs the distinction between anti-Jewish racism and criticism of Israel. In accompanying examples, it is claimed to be anti-Semitic to label the Jewish state as a “racist endeavour” – even though, as recorded by Amnesty, the secondary status of non-Jews was built into it from the outset.

Declaring Israel a “settler-colonial state” also falls foul of this clause. The phrase is included in the landmark pro-Palestine resolution adopted earlier this month by the University of Melbourne Student Union. It has a particular resonance in Australia: the Zionist view of Palestine as “a land without a people for a people without a land” is a precise echo of the British colonialist concept of “terra nullius”, under which Aboriginal people were classed as native fauna instead of human beings.

Another IHRA example of anti-Semitism is defined as denying “the Jewish right to self-determination”. This formula first cropped up in a submission to the United Nations by the Coordinating Board of Jewish Organisations, in 2005.

It was referenced by Andrew Feiglin, president of the Melbourne University Jewish Students Society, in opposing the motion: “If you remove Zionism from Judaism, you don’t have Judaism”.

There are two obvious logical lacunae in this statement. Firstly, the large numbers of non-Zionist (and even anti-Zionist) Jews are none the less Jewish for it. They include fully one in five US Jews, according to a survey by the Jewish Electoral Institute. The recent adoption of an explicitly anti-Zionist stance by Chicago’s Tzedek Synagogue clearly speaks to this growing constituency.

Secondly, the phrase, “Jewish right to self-determination” is a non-sequitur. It contains a comparison of, as it were, apples with oranges. The modern nation state system is distinctively secular: conceived and adopted as long ago as 1648, in the Treaty of Westphalia, explicitly as a successor concept to race and religion as the organising principle of territorial political authority (following Europe’s tortuous religious wars of the previous two centuries).

There is no Jewish right to self-determination for the same reason that there is no Buddhist, Hindu, Islamic or Christian right. (So, the discriminatory practices of sectarian governments in – for instance – Sri Lanka, India or Iran, and machinations in the US Bible Belt that seem poised to remove women’s reproductive rights, are objectionable for the same basic reason. They have no place in a modern system of nation states).

On occasions when light shines into the crevices of Zionism, as with Abu Akleh’s murder, or spasms of intense media coverage in the series of military attacks on Gaza since 2009, its legitimacy in the eyes of world publics takes a downward lurch.

An opinion poll commissioned by the Australia-Palestine Advocacy Network in time for the federal election campaign shows majority public support for an independent Palestinian state, and for the present International Criminal Court investigation into Israeli war crimes – despite Canberra’s positioning of denialism on both these issues.

By contrast, the IHRA definition grows and spreads in the dark. NSW Labor was bamboozled into adopting it “without open debate” at a state conference last year. Outgoing Prime Minister Scott Morrison pledged support on behalf of the Commonwealth in a little-noticed Zoom contribution to an online conference convened by Sweden.

In response, Australian Jewish Association president David Adler openly anticipated its use to stifle debate on university campuses: “The IHRA definition will be useful for law enforcement, media and educational institutions”.

The true target of all this hasbara (propaganda) activity, including by groups in Australia that masquerade behind community-representative credentials, is the movement for Boycott, Divestment and Sanctions, which enjoyed stunning success in persuading over a hundred artists to withdraw from this year’s Sydney Festival, over its acceptance of sponsorship by the Israeli embassy.

Formed in response to an initiative by Palestinian civil society following a World Court judgement that confirmed Israel’s occupation of 1967 as an illegal land grab, one of its three key demands is supporting the right of return for Palestinian refugees driven from their homes in al Nakba, the continuing onslaught of racist ethnic cleansing on which Israel is based. (The others are an end to that occupation, and equal rights to replace the panoply of apartheid laws).

That would end the inbuilt Jewish majority and hegemony. In Herzl’s vision, that was the only way to guarantee Jewish rights and freedom from oppression. But the price is too high, including, as it does, ongoing and serial war crimes and crimes against humanity.

That price is paid mainly by Palestinians, despite their having no hand in the expulsions and persecution of Jews in Christian Europe, let alone the Holocaust. And it is paid by the rest of us as international law, and international humanitarian law, are steadily undermined.

These are debates we urgently need. We cannot allow a flawed and discredited definition of anti-Semitism to get in the way.

Jake Lynch is an Associate Professor of Peace and Conflict Studies at the University of Sydney. He is the most published and most cited author in the field of Peace Journalism, with seven books and over 60 refereed articles and book chapters to his credit. A Global Standard for Reporting Conflict, 2014, was named Book of the Conference by the Conflict Research Society. He spent 2020 in the UK as a Leverhulme Visiting Professor at the Centre for Trust, Peace and Social Relations of Coventry University. For his contributions to Peace Journalism theory and practice, Jake was honoured with the Luxembourg Peace Prize in 2017.