ANTONY GREEN. Why independents won’t matter so much at the next election (ABC News).

The first is that opinion polls consistently report that Labor is strongly placed to win majority government.

Experience at both state and federal elections is that independents are much more likely to win traditional conservative electorates. If the polls are right, any independent surge at this year’s election will impact on the Coalition as it moves into opposition rather than obstruct Labor’s prospects for majority government.

There is no generic vote for a candidate to harvest based on the word “independent” appearing next to their name on the ballot paper. Results show that independents with a high profile can attract votes, but results also show that most independents poll poorly.

Saying independents will do well means first naming the independents who can poll strongly. Any independent hoping to poll well must announce themselves ahead of the election, they must run in the right seat, and they will need plenty of volunteers prepared to help in their quest for election.

How independents polled at the 2016 election

There were 108 independent candidates in Lower House seats at the 2016 federal election. Of those, 84 lost their deposits after polling less than 4 per cent. Only seven polled more than 10 per cent, and only four polled more than 20 per cent and finished in the final preference count. Only two were elected.

The two highest polling candidates were re-elected independent MPs Andrew Wilkie in Denison (polled 44.1 per cent) and Cathy McGowan in Indi (34.8 per cent).

The other two above 10 per cent were Dr Stephen Ruff in North Sydney (12.8 per cent), who had contested local seats on a hospital issue twice in the previous 18 months, and former television presenter James Mathison in Warringah (11.4 per cent).

That the top four independents contested regional or smaller metropolitan area seats is not a coincidence. Such seats have significant local media with time and space to fill covering the local campaign.

In safe seats, one party tends to have a majority of locked-in supporters who would not desert to the other side of politics. But if the sitting member is controversial, or seen as low profile or not working hard enough, an independent has appeal by promising to put the local area above party politics.

Winning in a safe seat requires an independent to poll a minimum 20 per cent, more likely 25-33 per cent, to get into second place. Success from there requires strong flows of preferences from other parties, something independents have achieved with greater success than minor parties such as One Nation and the Greens. 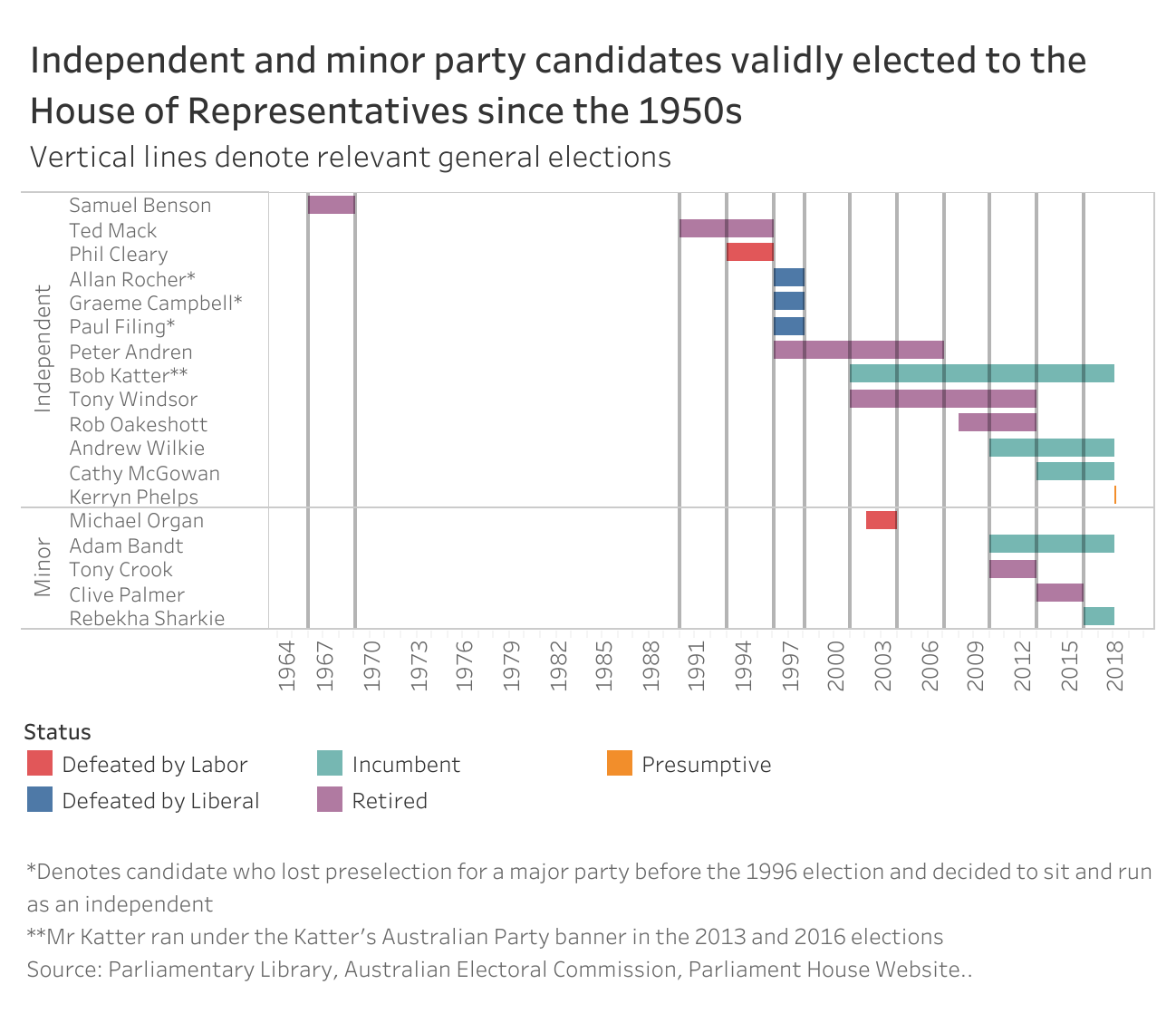 Overwhelmingly independents are elected on local, not national issues, and continue to win re-election if they are seen as tending to their local patch.

When shifts in the electoral pendulum deliver independents influence through the balance of power, life can become more difficult. Independents can find themselves torn between prominence on national issues versus the narrower focus required to hold your local electorate.

And as Tony Windsor and Rob Oakeshott discovered while supporting the Gillard government, being seen as supporting the other side of politics can be bad news for any independent.

The past election of independents

Only 12 independents have been elected to the House of Representatives since 1950, and the majority of those had past connections with party politics.

Of these five, only Bob Katter went on to win further re-election, the other four retiring or being defeated. Mr Katter also moved on to found his own political party.

Two further independents had National Party connections and served as state MPs. Tony Windsor (New England 2001-2013) was first elected as a state independent after losing a controversial National state pre-selection, and Rob Oakeshott (Lyne 2008-2013) had been a National state MP before falling out with local party branches.

Ted Mack (North Sydney 1990-96) was the first modern independent elected with no previous party background. He defeated Liberal John Spender in North Sydney in 1990 and retired in 1996. Before his election, Mr Mack had an enormous local profile having represented much of the district for more than a decade as either Mayor of North Sydney or state MP for North Shore.

Mr Cleary had a high profile as local football coach, commentator and anti-domestic violence campaigner, and easily defeated his little-known Labor opponent. Mr Cleary won the seat again in 1993 but was defeated in 1996.

The 1996 election saw the next independent with no party background elected. Peter Andren (Calare 1996-2007) was unusual in that the seat he won was marginal, but he was helped by a huge local profile as a regional television newsreader. While Mr Andren spoke out on national issues, he was never part of the balance of power and his election relied on servicing his local seat.

Cathy McGowan (Indi 2013-16) had extensive local connections before winning her seat. Her campaign was assisted by the profile of her Liberal opponent Sophie Mirabella.

Melbourne raised and a tough operator within the Liberal Party, Ms Mirabella ruffled local feathers and was marked down locally for focussing on reaching Cabinet. Ms McGowan worked on local connection, building a movement “Voices for Indi” from which she launched her successful election and re-election bids.

Independent number 12 is Dr Kerryn Phelps. She won the Wentworth by-election in October 2018. Like Phil Cleary, Dr Phelps benefited from the deposition of a prime minister, in this case Malcolm Turnbull. Dr Phelps was advantaged by her high media profile, as well as the national media attention on a by-election with implications for the balance of power in the House of Representatives. Holding her metropolitan seat at a general election may be tougher with less media coverage and diminished anger at the manner of Mr Turnbull’s departure.

The announcement that Cathy McGowan is not re-contesting Indi puts into question whether the seat will stay with an independent. The Voices for Indi movement has selected Dr Helen Haines as its new candidate, but Dr Haines must now convince Ms McGowan’s supporters to transfer their allegiance.

While there are examples of state independents being succeeded by another independent, this has not happened previously at a federal election. Many former Liberal and National voters who gave personal support to Ms McGowan may gravitate back to their traditional political home.

The absence of Sophie Mirabella and the potential candidacy of National Party Deputy Leader, Senator Bridget McKenzie, would give Indi voters another option to choose from.

It should be noted that two independents with past connections to Ms McGowan were both unsuccessful in contesting local seats at the recent Victorian state election.

An independent did win Mildura at the Victorian election, which has raised the question whether an independent could win the overlapping federal seat of Mallee. The prospect of an independent challenge increased when current National MP Andrew Broad withdrew after being caught up in an online dating scam.

Several names are mentioned as possible independent candidates. Former Yarriambiak Shire Mayor Ray Kingston has put himself forward, but he represented one of the smaller councils in the seat. Successful Mildura independent Ali Cupper was elected at her third attempt against an incumbent National MP, but any independent contesting Mallee will benefit from Mr Broad’s departure.

Former independent MP Rob Oakeshott has announced he will contest the NSW north coast seat of Cowper. He polled 26.3 per cent in the seat in 2016 and previously represented parts of the seat as member for Lyne and the state seat of Port Macquarie. His prospects are improved by the decision of Nationals MP Luke Hartsuyker to retire.

Mr Oakeshott has the significant advantage of being well known. But fame can be a double-edged sword. Many voters will have a positive view of his time representing Port Macquarie in both state and federal parliaments, but in a conservative seat like Cowper, others will mark him down for having backed the Gillard government.

The seat that attracts most rumours is whether an independent will challenge former prime minister Tony Abbott in his seat of Warringah. Local groups have been copying the Voices for Indi model, and several candidate names are rumoured.

The only independent to declare so far is television producer and Indigenous activist Susan Moylan-Coombs, but she does not appear to bring the sort of high profile required to win a seat like Warringah.

When Dr Phelps began her victory speech on the night of the Wentworth by-election, she momentarily misspoke and thanked the voters of Warringah. Sitting opposite each other across Sydney harbour, with similar demographics and being represented by former prime ministers, there are clear similarities between the electorates of Wentworth and Warringah.

But there are also big differences. The most important is that Dr Phelps’s victory was only narrow and helped by the full glare of national media coverage.

By contrast, the contest in Warringah will attract far less attention in the midst of a federal election campaign. Unseating a long-serving member like Tony Abbott will require a candidate who already has a very high public profile, and will also need lots of troops on the ground to make sure the candidate’s message reaches the voters.