It is hard to dismount from a Tiger 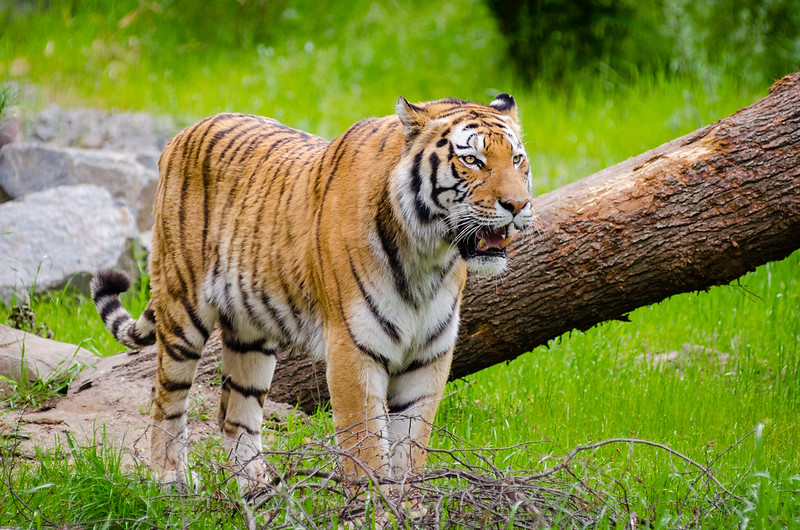 We were keen to develop economic ties with China.  Why now are we “twisting the tiger’s tail”?  Has China created this national emergency? (Image: Flickr / Mathias Appel)

The well-known Chinese proverb, “When you’re riding a tiger, it’s hard to get off” is a particularly apt description of Australia’s relations with China in 2022, the Year of the Tiger according to the Chinese calendar.

Australia’s China policy is very simply expressed as to “stand up”, against its bullying and aggression.  Any talk of cooperation or of mutual beneficial trade and investment, or even people to people exchanges, tourism, education and academic exchanges is called “being soft on China.”  Further, in the run up to the federal elections, China policy, which has always been bipartisan, is being made an election issue, and political leaders including Scott Morrison and Peter Dutton have decided that we need to put ourselves on a war footing, expecting that conflict may break out any time, even in the next few years.

Unfortunately, this anti-China policy is wrong.  It is wrong because it is based on untruths, exaggerations and misunderstandings.  That is why that proverb is so relevant.

The Department of Defence’s 2020 Defence Strategic Update focuses on active offshore activity, a so-called “forward policy” and refers to countries that “pursue their strategic interests through a combination of coercive activities, including espionage, interference and economic levers”, that is, China.  To counter China, we will boost our long-range strike capacity and develop hostile cyber capabilities.

European-made “Tiger” armed reconnaissance helicopters will be replaced with American Boeing Apache Guardian attack helicopters. These are suitable for use in land-based attacking campaigns outside Australia.  ASPI’s Malcolm Davis has described them as having superior capabilities in providing battlefield information, striking behind enemy lines and supporting infantry in combat.  American Abrams tanks will provide interoperability with American land forces.  Australian-built Collins class submarines will be superseded by nuclear subs with a range that can extend to the Taiwan Strait and support the American navy.  Australian military planning has shifted from air defence to land and sea warfare, and the most likely battlefield is the South China Sea and the Chinese mainland.

We are being softened up in preparation for war. Defence Minister Peter Dutton told the National Press Club in November last year that there were “dark clouds” building in a “deteriorating region”:

Every major city in Australia, including Hobart, is within range of China’s missiles…. Both the Prime Minister and I have spoken about how the times in which we live have echoes of the 1930s.  The world would be foolish to repeat the mistakes of the 1930s.

Last week, Dutton said Australia must stand up to China in the South China Sea or “lose the next decade.”  This standing up has in fact already begun.  In 2018 the government enacted the National Security Legislation Amendment Act and a Foreign Influence Transparency Scheme Bill.  Last year, it cancelled Victoria’s Memorandum of Understanding to participate in China’s “Belt and Road” scheme.  This month, the formerly moribund regional dialogue known as the Quad met in Melbourne, their main topic how to counter China’s growing influence.  The Quad, and the new AUKUS pact between Australia, the UK and the US, is designed to boost security and intelligence cooperation vis-à-vis China.

How have things turned around so quickly?   Just three years ago, in 2019, Australian and Chinese armies conducted a joint exercise in South China.  Then we were keen to develop economic ties with China.  Why now are we “twisting the tiger’s tail”?  Has China created this national emergency?

China’s new ambassador to Australia, Xiao Qian, a respected senior diplomat, said on arrival that relations had reached a critical juncture and he aimed to “jointly push them back to the right track.”  He said he would “eliminate misunderstanding and suspicion, promote mutually beneficial exchanges and cooperation in all areas between the two sides.” Hardly a wolf warrior.

Earlier this month, commenting on the Quad meeting, Chinese Foreign Ministry spokesman Zhao Lijian objected to US Secretary of State Anthony Blinken’s statement that China was challenging democratic values and the international order.  Zhao said that democracy was a common value of mankind; that China wanted to see peace and development in the region; and that it supported the United Nations and international law.  Again, not wolf warrior words.

Dutton dismissed these statements and clearly believes China to be an aggressor.  I do not see the evidence for this. China does not seek to develop through territorial expansion.  It knows that its future depends on stability and security, both in the region and at home.

People often forget that China is the same size as the European Union, and equally complex.  There are many regional differences and contrasting points of view, between city and countryside, and between educated and uneducated.  It is hard for the central government to hold the nation together.  Its main concern is to prevent “chaos” and separatist tendencies.

That brings us to the subject of human rights.  Should we stand up to China because of its human rights record?  There are certainly widespread breaches.  Of these, the most egregious is the death penalty.  In 2020, the last year for which I have figures, China carried out more executions than any other country.  The exact figure is a state secret but is certainly in the thousands.  It should be noted however that per head of population, the rate is comparable with other countries such as Vietnam and Singapore – two countries that we count as friends.

China is accused of genocide in the far western province of Xinjiang, of forcing thousands of Uighurs and other Muslim minority peoples into residential re-education camps, and of aiming to wipe out their language and culture.  The evidence for this claim is contested and all sides have exaggerated the situation.  Let us wait for the visit to Xinjiang by the United Nations Human Rights Commissioner and her forthcoming report before reaching judgment.  I can say however that the Chinese government is heavy-handed in its treatment of all ethnic minorities in China.  It could learn a lot from our own mistaken government intervention into Aboriginal affairs, which is a carryover of colonial attitudes, of white people believing that they know how to solve brown people’s problems.

Regarding external aggression, China is accused of plans to invade the island of Taiwan in order to effect unification.  President Xi Jinping has said that solving “the Taiwan question” is an “unswerving historical task”, but this is clearly a domestic issue. The Australian government also acknowledged this when it recognised the People’s Republic of China 50 years ago.  Since then, it has never admitted that Taiwan, the Republic of China, was a sovereign state.  Why should Dutton make this an international issue?

China is also accused of claiming large parts of the South China Sea, building military bases on artificially constructed islands and impinging on counterclaims to territory by Vietnam, Malaysia and the Philippines.  This tricky issue should be resolvable by the United Nations.  Unfortunately, the 2016 ruling by UNCLOS (the United Nations Convention on the Law of the Sea) was not accepted by China, or by Taiwan, which claims the same territory.  The United States has never ratified UNCLOS.  If only it were to do so, surely an agreed solution should be possible.  For heaven’s sake, let us not go to war over this.

Under former President Donald Trump, the United States became increasingly hostile to China, the emerging superpower, accused it of engineering Covid and spreading it to the world and of not playing by international rules, even while it withdrew from various UN bodies that preside over those rules.  President Biden has toned down the rhetoric but largely continued Trump’s policies.  There may be good reason why Chinese leaders feel threatened.

Rather than being an aggressor, China itself feels hemmed in and threatened.  US military bases and military assets extend in an arc from Japan and South Korea to the east to the Philippines and Australia in the south and Singapore, Malaysia and Thailand in the south-west.  The US is boosting security ties with Vietnam and India.  It has also a long-standing commitment to provide Taiwan with military hardware and has increased naval exercises in the region.

Why then does Dutton say that the fault is all on China’s side; we have not changed; China has changed; China has aggressive intent towards Australia, deploying soft power, undermining our economy with trade sanctions, cyber-attacks, spreading Covid, subverting our neighbours with tied aid and damaging our political system through corrupt funding and use of personal connections, particularly the Chinese Australian community?

This anti-China rhetoric started in the United States under Trump, but it has been enlarged and enhanced in Canberra. Our defence establishment now desperately talks of Chinese aggression that must be resisted and requires joint action by the US and Australia.  Unfortunately, the US has been rent by internal divisions and political mayhem and the economy is not prospering.  Washington could withdraw from East Asia to concentrate on problems at home and in Europe and the Americas.  That would endanger the ANZUS alliance, on which we have long relied to bolster our security.  Canberra’s defence establishment therefore hype the dangers of China’s expansionist plans and urge the need for a continued American presence in the region.

There is another Chinese proverb about a tiger, “The fox borrows the tiger’s power”.  It is said that a tiger caught a fox.  The cunning fox tricked the tiger, claiming that he himself had been sent to rule all the animals.  He led the tiger deep into the forest.  There, the wild animals paid no attention to the fox but ran away from the tiger following behind him.  The proverb describes someone with little personal influence, who may be able to succeed for a while through alliance with a greater power.  In this Year of the Tiger, it could describe our China policy.  If Australia is the fox, America is the tiger, and we would be what George Bush called America’s “deputy sheriff” in Asia.

Pursuing another nation’s causes is daft, not deft foreign policy.  There is an alternative.  It is time to dismount from the tiger.

(This article is condensed from a paper given by the author at the conference “Where Does Australia’s Security Lie?” convened by Pax Christi on 19 February 2022.)