Are surgeons just a little bit less careful when operating on their birthdays?

‘Yes, if you think the op’s necessary, Doc, of course I’ll have it. Just so I know, are there any risks? And how long will I be in hospital? Thanks, see you in theatre. Oh, by the way, you won’t be operating on me on your birthday, will you, Doc?’

In general, distractions are known to have an unhelpful effect on people’s decision making. However, although  5-10% of patients die after surgery and 20-40% of these deaths are considered preventable, and despite many distractions occurring in operating theatres (noise, commotion, conversations, etc.), the influence of distractions on the outcomes of surgery has been little investigated.

A study recently published in the British Medical Journal (BMJ) has demonstrated a 1.3% higher mortality rate in the 30 days after the operation when the op is performed on the surgeon’s birthday than when it is performed on any other day of the year (6.9% vs 5.6%).

Without going into all the study’s details, it involved almost one million emergency operations by 47,500 surgeons in the USA. The patients were females and males aged 65-99 years who underwent one of 17 common operations within three days of admission. Most of the operations involved the heart or a major blood vessel, abdominal problems or fractures of the leg, and a higher mortality rate was observed in 15 of the 17 operations. 0.2% of the operations were conducted on the surgeon’s birthday – which is about what you’d expect (1/365 = 0.27%). The results were adjusted, as is common in this sort of study, to account for differences among the patients, the surgeons and the hospitals.

The graph below provides some additional details of the results during the month around the surgeon’s birthday. The higher blue dot in the middle is the 30-day mortality rate for operations performed on the surgeon’s birthday (6.9%) and the blue dots on each side are the mortality rates for each two day period before and after the birthday. The red line is the average mortality rate for the rest of the year (5.6%). The difference represents a 23% increase in mortality, which is similar to studies that have examined mortality rates after surgery conducted on public holidays and weekends, occasions that may also affect hospital staffing levels and the patient’s decision to seek care. 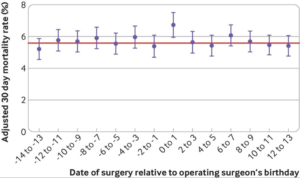 The authors propose several possible explanations for the increased mortality rate. First, surgeons may feel rushed to complete operations on their birthday because they have celebrations planned. They may also let junior colleagues complete operations for them. Second, their concentration may be (albeit only marginally) diverted by other considerations, birthday events or reflections on their life, for instance. Third, surgeons may be distracted by their operating room colleagues’ congratulations and/or by well-wishers’ text messages and phone calls. Fourth, surgeons may not be as diligent as usual with the immediate post-operative follow-up they provide to the patient.

The authors conclude that ‘the results indicate that individual surgeons’ performance may be meaningfully influenced by life events outside of their work environment’ and that the patterns observed may extend to other distracting life events.

It is perhaps not surprising that the five responses to the paper on the BMJ’s website have taken exception to the research itself and its publication by the BMJ. Respondents were critical of the research design and the statistical methods used, suggested that the different mortality rates are not statistically significant, proposed alternative explanations for the findings, noted the research team’s lack of surgical experience and questioned their motivations in conducting and publishing the study. The respondents also deeply regretted the ‘irresponsible’ besmirching of the reputations of American surgeons and that the sensational reporting of the study in the electronic and traditional media (google ‘patient mortality surgeon birthday’ for example) would undermine patients’ confidence and trust in their surgical care team: ‘Patient confidence is a vital asset that must not be squandered on conjectures as silly and pointless as the one put forth in this paper.’ Concern was also expressed that the study would hinder efforts to improve surgeons’ work-life balance.

The BMJ’s decision to publish the paper in the ‘Christmas edition’ – which often contains quirky, even jocular, articles but ones which nonetheless have an important point to make – was also criticised as poor science communication, augmented by trivialising the issue with a picture of a birthday cake.

For my own part, I think the investigators used considerable ingenuity to conceive and design the study and I assume that the BMJ followed their usual procedure of sending the article for peer review and possible amendment by the authors before publication. That’s not to say that this article, any more than any other scientific publication, is beyond criticism. It may even be wrong – one study seldom presents totally conclusive evidence for anything. But it isn’t obvious to me that the researchers or the BMJ have been careless in publishing the study and an uncharitable observer might be tempted to wonder if the online commentators aren’t being just a tad precious and unnecessarily defensive – character traits not completely unknown among members of the medical profession. I personally would welcome a similar article that looks at post-operative mortality and the birthdays of anaesthetists.