Are there lessons for the rest of the world in Australia’s management of covid-19 and the “corona-recession”?

One could question whether Australia is ‘leading the pack’ in recovering from the ‘corona-recession’.

Of the now 83 countries which have reported GDP figures for the final quarter of last year (and 30 of which are shown in Chart 1), there are eleven in which Q4 real GDP was higher than the pre-pandemic level, and we’re not one of them; there are also nine other countries who, though yet to regain their pre-pandemic levels of economic activity, are nonetheless closer to it than we were (one of those is of course New Zealand). 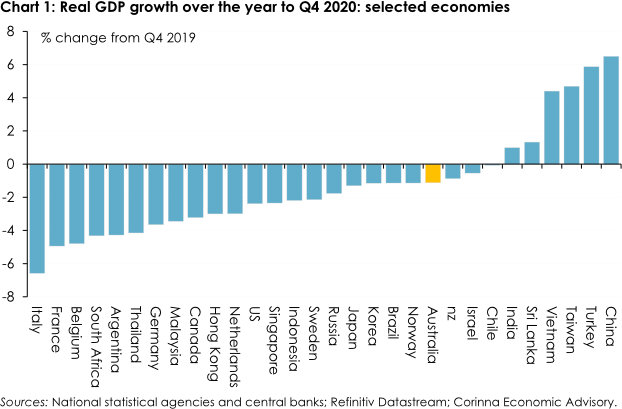 Some of our success in keeping the virus at bay is due to ‘good luck’ – that is, being so far away from almost everywhere else and being an island and hence it being much easier to keep the virus out to begin with. But, in addition to those (one might say, especially at this time of year, ‘God-given’) advantages, our governments – unlike those of many other countries, most obviously the US (until 20th January this year) and the UK – have, to their credit, listened to, been guided by and have acted upon scientific advice, and our population have been highly compliant with what they’ve been asked to do (or not to do). 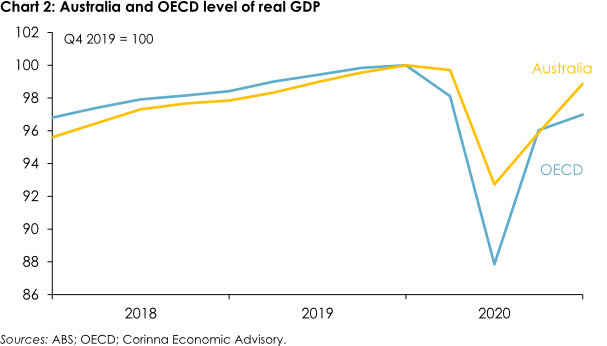 However the reputation our governments have established for competence in managing the pandemic is now being challenged by the shortcomings, to date, in ‘rolling out’ vaccines (not all of which, to be fair, are the fault of governments – or, at least, not Australian federal or state governments – but some of them are): it’s almost the opposite of the UK, whose government was one of the worst in the world at managing the virus, but has been one of the best at administering vaccines.

So to the economics of all this.

While I wouldn’t contest the Treasury’s estimates of 100-150,000 job losses arising from the termination of JobKeeper – which would add 0.7-1.0 pc pts to the unemployment rate if all of them fail to find other jobs, and none of them drop out of the labour force (neither of which I expect to be the case in practice) – I think that any rise in unemployment will prove temporary, and that there’s a good chance that the unemployment rate will be back down to where it was before the pandemic (ie about 5¼%), if not lower, before year-end.
News last week of another rise in the number of job vacancies, to a record high in February – such that there are now ‘only’ 2.8 unemployed people for every job vacancy, the lowest number since before the global financial crisis (Chart3) – underscores expectations that while not all of those who lose their jobs as a result of the termination of JobKeeper will be readily able to find others, a reasonable proportion of them should be able to. 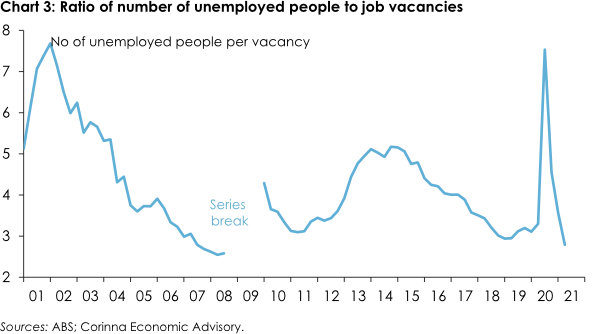 An important but under-appreciated reason for the so-far surprisingly rapid decline in unemployment, from its lower-than-expected peak of 7.5% last July, is the absence of any immigration: which means that the civilian working age population is now growing at (on average over the past two quarters) only 8,300 per month, cf. an average of 27,700 per month over the three years to March 2020.

And that in turn means that, with an unchanged participation rate (given that it is already at a record high), employment only needs to grow at around one-third of its pre-pandemic rate in order to prevent the unemployment rate from rising.

Or, to put it another way, if the working age population continues growing over the remainder of the year at the (much slower) rate at which it has been over the past six months, employment growth of just 17,000 (or 0.13%) per month on average would be sufficient to push the unemployment rate down to just below 5% by the end of this year (with an unchanged workforce participation rate): whereas if the working-age population were to have continued growing at its pre-pandemic rate, it would require employment growth to average 29,000 (0.22%) per month in order to get the unemployment rate down to just below 5% by December.

True, immigration also creates demand which in turn feeds into jobs growth. But even without that impetus, demand is currently (and seems likely to continue) growing more strongly than it did pre-pandemic – thanks not only to fiscal stimulus (some of which is going to continue notwithstanding the termination of JobKeeper and the tapering of JobSeeker), but also (as shown in Chart 4) to the roughly $55bn per annum which Australians used to spend overseas each year but now can’t (because of the fatwa on Australians leaving the country), a large part of which Australians are instead spending at home (and on their homes). 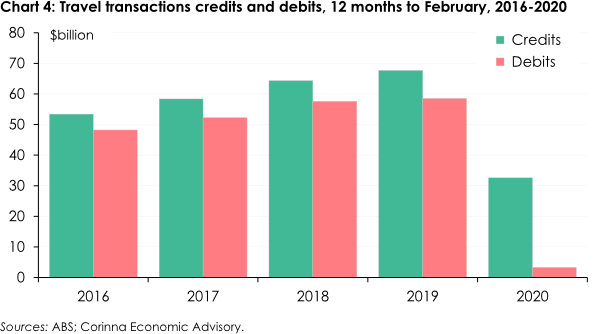 This offsets by more than $22bn per annum (or about 1¼% of GDP) the drop in spending within Australia by foreign visitors and international students). And then there’s the very large increase (of over $125bn or 12¾%) in ‘spendable’ savings which households have accumulated in bank deposits since the onset of the pandemic.

So it is quite plausible that the RBA’s stipulation for a labour market that’s sufficiently tight to generate the sort of wage inflation that it thinks is in turn required to push ‘underlying’ CPI inflation sustainably back into its 2-3% target range – ie, of ‘4 point something’ or lower – could be reached well before its ‘guidance’ of ‘2024 at the earliest’. At the very least, the probability of that happening is more than zero, even if it’s still less than 50%.

And I’m therefore surprised that the RBA hasn’t left some ‘wriggle room’ to allow for that possibility, by talking in terms of ‘patience and time’ being required before it starts raising rates, rather than pinning itself down to a point on the calendar – something that no other central bank I’m aware of, other than the Bank of Canada, has done.

In this context the clear signal a couple of weeks ago by Norges Bank – which was, along with the RBA, one of the first ‘advanced economy’ central banks to raise rates after the GFC (and one of the few who raised rates at all between the GFC and the pandemic) – that it expects to start raising rates in the second half of this year – might be seen as, at the very least, food for thought.

Personally, I would like to see the Government give the RBA a bit of leeway to raise rates by ‘holding back’ from beginning the task of ‘budget repair’ until the unemployment rate is ‘comfortably below 5%’ – a more ambitious goal than the ‘comfortably below 6%’ stipulated by the Treasurer in September last year when he first foreshadowed the ‘re-calibration’ of the Government’s fiscal strategy ahead of the 2020-21 Budget.

His original threshold wasn’t unreasonable given that, at the time, it was widely expected that the unemployment rate would peak well above 10% and take much longer to come down from that peak than it has. But now that things look very different, some ‘re-calibration’ of that target would seem appropriate.

The Government and the RBA could ‘defend’ this as being necessary (or sensible, or both) in order to allow Australia to “rebuild its monetary policy ‘buffers’ ahead of the next cyclical downturn”, in much the same way as both the Coalition, and before it, the Rudd-Gillard Governments, defended returning to surplus after the GFC as being necessary to rebuild the nation’s “fiscal buffers” in preparation for the next cyclical downturn.

Indeed, a reasonable case can be made that it is more important to rebuild some leeway for monetary policy to respond to the next downturn than it is to rebuild leeway for fiscal policy, given that interest rates are effectively at the ‘lower bound’, whereas Australia’s public finances are (despite the knock they’ve taken during the pandemic) in much better shape than those of most other ‘advanced’ economies.

That’s particularly so given that – contrary to all the widely held expectations in the aftermath of the pandemic’s onset – house prices are now rising rapidly again, notwithstanding the absence of demand from recently-arrived migrants and still subdued demand from investors (although the February housing finance data released this week suggests that investor demand may be re-awakening from its long slumber).

I don’t agree with APRA’s Chairman that there is ‘no evidence’ of a deterioration in lending standards’. True, interest-only loans remain a small proportion of new lending: but over 40% of new loans in the second half of last year were at LVRs of above 80% cf. less than 20% in the first half of 2018 (Chart 5). 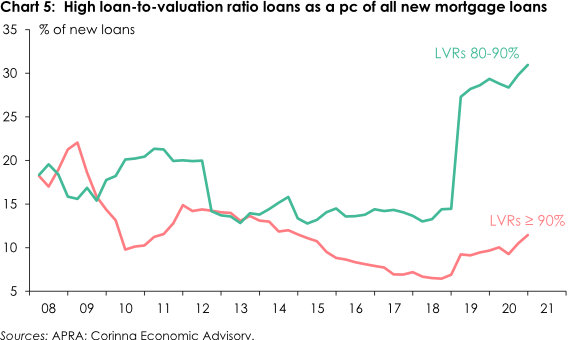 That may well owe something to the increased proportion of loans being made to first time buyers, who do typically have to borrow at higher LVRs than those ‘trading up’: but first-time buyers still account for ‘only’ 25% of all new loans, so that can’t be the sole explanation.

The deterioration in lending standards is clearly nowhere near as marked as it has been in New Zealand – although the fact that most of the NZ banks are subsidiaries of Australian banks should alert our authorities to the possibility that the same thing could happen here should there be sufficient demand from borrowers.

I’m not advocating that Australia should copy what the NZ Government has done – ie, denying interest payments as a deduction for tax purposes against the rental income, and taxing capital gains on properties held for less than 10 years at full marginal rates without any allowance for inflation – and with an arguably retrospective element to it as well.

I’d settle for not allowing interest payments as a deduction against non-investment income, and a reduction in the CGT discount, as I’ve advocated for 33 and 21 years, respectively; and as proposed by Labor at the past two elections.

I’d also ask why hasn’t the Government terminated its stepped up program of cash grants to first-time buyers, now that conditions in the housing market have changed so much, in the same way and for the same reason that they’ve terminated JobKeeper (although to be fair I acknowledge that they have at least tapered it).

I’m not sure that there are any obvious new lessons from Australia’s experience for other countries. The most important lessons are surely (1) to listen to and act upon scientific advice in order to minimize the spread of the virus, so that extended lock-downs can be avoided as much as possible (which we did, for the most part, and lots of other countries didn’t); and (2) to err on the side of ‘doing too much’ rather than ‘too little’ by way of economic stimulus – which we did during the GFC and have done again this time, but a lot of countries made the ‘wrong’ mistake during or after the GFC, and seem to have avoided that this time.

Indeed, maybe there is a lesson for us in what the US Administration seems to be doing: ie, ‘taking advantage’ of the prospect of an extended period of low interest rates to undertake a significant program of (hopefully) productivity-enhancing public investment, and also to use the opportunity to unwind tax cuts that can’t be justified, are unsustainable and should be reversed.

Another version of this article was published in the AFR. 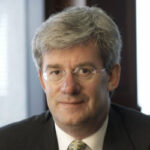