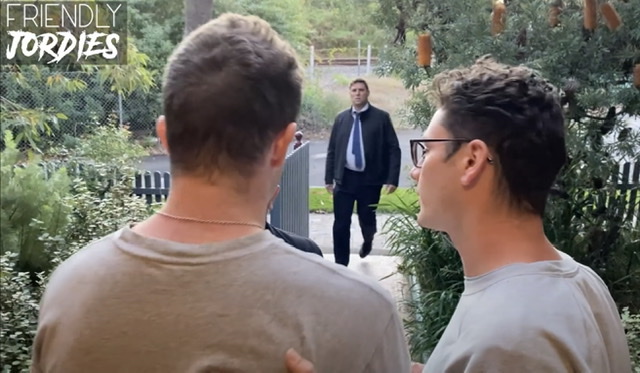 When politicians in Australia rushed to legislate in the wake of 9/11 and the commencement of the so-called ‘war on terror’, some of us warned that such legislation and the bureaucracy it created would be abused by police. We warned that the sorts of concepts and powers that anti-terror laws spawned would find their way into other areas of social control.

And so it has come to pass with the announcement that a comedian and YouTube creative Kristo Langker has been arrested and charged by New South Wales Police for allegedly stalking and intimidating the combative New South Wales Deputy Premier John Barilaro.

Langker’s alleged ‘crimes’ have their genesis in a video for a YouTube channel called Friendlyjordies, which features comedian Jordan Shanks, and which claimed Mr Barilaro has been indulging in corrupt activities. Mr Barilaro strenuously denies the allegations and is taking legal action against Shanks and Google. Langker and Shanks attended a Macquarie University Politics in the Pub event and asked Barilaro why he was suing. Langker stayed on after Shanks left and according to police, tried to bustle his way through the audience to get closer to Barilaro. Then Langker, on June 4, approached Barilaro as the latter was leaving a funeral and asked him the same question. Langker was arrested and charged that day and is now on bail subject to strict conditions.

One could ask how what appears to be simply a form of protest that is often used by individuals and groups to confront politicians (I remember former Prime Minister Malcolm Fraser being verbally abused and jostled at Monash University in 1981) has resulted in charges which carry jail terms. But leaving the questionable use of prosecutorial discretion and police resources aside, what is frightening – and that is the operative word – is that the New South Wales Police deployed what they call the Fixated Persons Investigations Unit (FPIU) to investigate Langker.

The FPIU is a tool of the war on terror. It was created in 2017 and on April 26 that year launched by the New South Wales Police Commissioner Mick Fuller. Paul Farrell, reporting on the launch for The Guardian, wrote: “the Fixated Persons Investigations Unit would be comprised of police officers and mental health specialists to identify potentially vulnerable people who may be at risk of exposure to extremist material. The newly formed unit will be separate from the NSW joint counter-terrorism team, and will have a particular focus on marginalised individuals in the community.” The aim of the FPIU is to deal with those who do not fit within the profile of potential terrorism suspects. According to Fuller; “This unit will complement potential targets that will never be seen as an active counter-terrorism target.”

In short, the FPIU was simply another arm of state power in the ‘war on terror’. To use it outside of this narrowly confined space is an abuse of power by police. There can be no other description of the conduct of the NSW Police in the Langker case. But sadly, as noted above, that police would abuse their power is not surprising, particularly in NSW where the leader of the police Mr Fuller, sees nothing untoward about strip-searching tactics used by his members.

The abuse of power in the Langker case is seriously problematic at a number of levels. Firstly, the gross misuse of an anti-terrorism tool. Secondly, the fact that it even occurred to police to use the FPIU. Thirdly, that it looks as though this abuse of state power is about protecting politicians who do not like the idea of freedom of speech being exercised in circumstances where they feel uncomfortable. Is it now the case that any person who confronts, or even mildly questions a politician in public, is going to be investigated by the FPIU?

But above all this case is yet another demonstration of the decline of democracy and the erosion of the rule of law in Australia. As I observed in Rise of the Right: The War on Australia’s Liberal Values (Hardie Grant Publishing 2019) since former Prime Minister John Howard suspended the rule of law, contrived to manipulate Australia’s borders, and created offshore prisons in 2001 so he could win an election built on fear of asylum seekers. There has been an inexorable shift in Australia towards increasing police and security agencies powers and undermining fundamental rights and freedoms.

The plight of Mr Langker is the latest manifestation of this trend. One expects police to invoke anti-terrorism tactics and laws to crush dissent in authoritarian regimes such as that in Belarus, but to see it being played out in Australia tells you how far we are walking down the authoritarian road.

The charges against Me Langker should be withdrawn. Those police officers who abused their power by turning a young man into some form of “terror suspect” should face scrutiny; independent scrutiny at that.