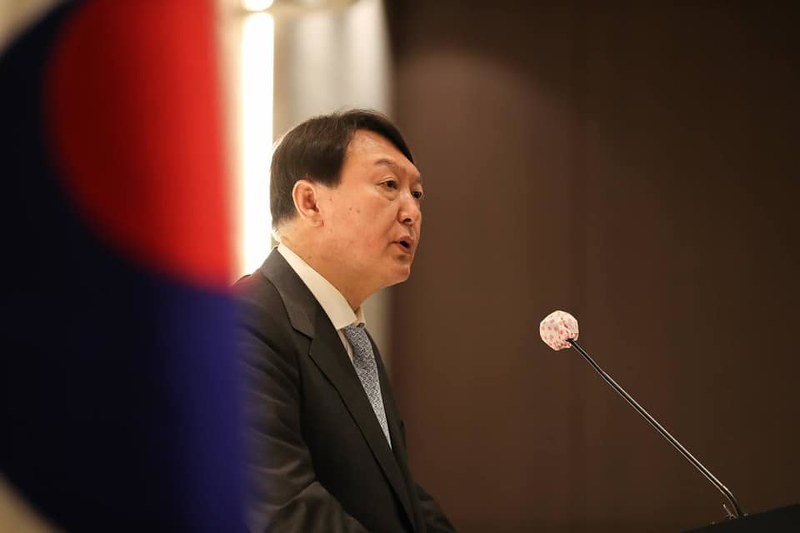 South Korea has elected a new president, with Yoon Suk-yeol of the conservative People Power Party beating Lee Jae-myung of the ruling Democratic Party of Korea after a campaign The Korea Times said was one of the closest presidential races ever contested in the country.

The paper reported Yoon, a former prosecutor-general, had won 48.6 per cent of votes, edging out Lee, with 47.8 per cent.

In a  foreign policy commentary the paper said Yoon would align more closely with the U.S., taking a tougher line on North Korea and seeking closer links with Japan.

The story quoted Harry Kazianis, of the Washington-based Centre for the National Interest, as saying the incoming president would talk tough on China but do little, because of the importance of the Korea-China economic relationship.

The Times said, however, Yoon had supported South Korean participation in working groups of the Quad alliance of the U.S., Japan, India and Australia. It reported U.S. President Joe Biden had spoken to Yoon by telephone and had invited him to the White House.

The Korea Times said the campaign had been the ugliest presidential election ever.

Yoon had alleged Lee had been involved in a big land development scandal but Lee had countered with his own allegations of Yoon’s involvement.

“They also mounted offensives against each other’s wives,” the paper said. “Yoon and the PPP slammed Lee’s wife for abusing her husband’s power…while Lee and the DPK aired suspicions on the career of Yoon’s wife.”

The issue of South Korea’s gender politics was explored in a pre-election article by syndicated journalist Gwynne Dyer, published in the Bangkok Post. “Gender is not the only issue… in South Korea but it’s the hot-button topic,” he wrote.

“The ‘F-word’ (feminism) is being used a lot by both major parties, and not in a good way.”

The Korea Herald reported in its main election story that Yoon had won the support of more male voters, while Lee had led among women.

Russia’s invasion of Ukraine and its onslaughts against civilian targets are the zoomed-in focus of international attention but Bangkok Post has issued a plea: don’t forget Myanmar.

“As the crisis in Myanmar passed the one-year milestone, resistance towards the junta snowballed into guerrilla warfare involving civilians joining militia groups,” the paper said in an editorial.

“The actions of the junta have driven 300,000 from Myanmar, with hundreds of civilians arrested, beaten, tortured or killed by the authorities, according to the United Nations…The U.N. projects that up to 25 million people of the country’s more than 55 million population will fall into poverty this year…

“The people of Myanmar need the world’s attention as well as humanitarian help more than ever.”

At The Jakarta Post, however, the editors seem to be losing patience with the Myanmar military regime. They ran a commentary by social issues campaigner Simone Galimberti, under the heading: “Why can’t ASEAN just suspend Myanmar?”

The headline was a watered-down version of Galimberti’s view. “Considering the military junta’s stubborn defiance of its own commitment to ending the plight of the people of Myanmar, ASEAN must formally suspend Myanmar from its activities,” she wrote.

“ ‘Formally suspending’ is far too moderate a position because actually Myanmar should be kicked out of the bloc until democracy is restored.”

Another commentary published in the paper hits out at the U.N. for stopping Myanmar, represented at the U.N. General Assembly by the anti-military National Unity Government, from taking part in a month-long session of its Human Rights Council.  Myanmar’s seat is to be left empty.

The article, signed by four human rights activists involved with Myanmar, says the people of the embattled country are looking to the U.N.to take a principled stand. “It has an opportunity to honor its human rights mission while living up to its obligations,” the article says.

But in Hong Kong, Bhavan Jaipragas, Chief Asian Correspondent of the South China Morning Post, has a more positive take on the potential fallout on Myanmar of Russia’s invasion. He noted ASEAN issued a bland statement calling on “all relevant parties to exercise maximum restraint”. But in the U.N. General Assembly, eight of the 10 ASEAN countries voted to condemn Russia. Only Communist-ruled Vietnam and Laos abstained.

It was, he suggested, a rare display of political spine, sending a strong signal about international law.

“Governments can and must dig deep to unite and adopt similar principled positions on issues such as the junta’s violence in Myanmar,” he wrote.

Did Vladimir Putin tell Xi Jinping in advance that Russia would invade Ukraine?

According to Japan’s The Asahi Shimbun, the answer is more-or-less Yes.

The paper published a confidently written report from Takashi Funakoshi, one of its correspondents, citing Chinese diplomatic authorities, of the February 4 pre-Olympics meeting between the two leaders at the Daoyutai State Guesthouse.

The sources confirmed that Putin discussed Ukraine with Xi, the story said.

The article said: “ ‘The Chinese side became aware at that meeting that Putin was determined not to rule out military operations against Ukraine’, the sources said…”Xi did not have a response…”

A case where what was not said was more important than any words spoken.

Russian troops invaded Ukraine less than three weeks later and China’s response has been to do a clumsy shuffle across the diplomatic dance floor – not giving Russia outright support but trying to blame the West for provoking Putin.

As part of the dance, China’s Foreign Minister, Wang Yi, accused the U.S. of looking to form an Indo-Pacific alliance similar to NATO.

The Japan Times, however, published a Bloomberg commentary saying there was just one problem with the suggestion – a previous effort had failed and most Asian countries were not interested in trying again.

The article quoted Marty Natalegawa, a former Indonesian foreign minister as saying: “It certainly is a non-starter for our region – definitely. Whenever you speak of Southeast Asia or the Indo-Pacific in general, for decades our efforts have been to build an architecture that is inclusive in nature, rather than returning to the old Cold War, East-West kind of divisions.”

In 2018, the Trump administration introduced a programme called the China Initiative, aimed at cracking down on espionage by China. It had some notable successes, says The Straits Times U.S. Correspondent, Charissa Yong. But it was controversial, especially as it seemed to involve racially profiling scientists, disproportionately targeting those of Chinese descent.

Many prosecutors went after researchers for paperwork errors – not disclosing ties to Beijing-affiliated bodies when seeking funding from U.S. agencies – rather than espionage.