The Americans are coming! ASIO looks away as hate groups gain foothold 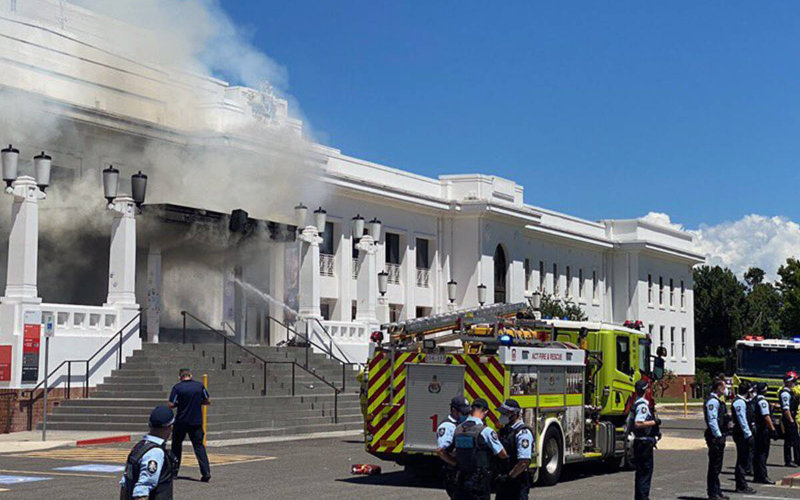 What does our security agency have to say about an insurgency linked to local fanatics who take their cues from Trump and the Republican right?

In his annual threat assessment released on Wednesday, ASIO chief Mike Burgess explained that agents of ‘foreign governments’ had been attempting to ‘disrupt’ an election by supporting a candidate who ‘either supported  the interests of the foreign government or who were assessed as vulnerable to inducements and cultivation.’

Wow!  Running for election  … how heinous is that? What was even more threatening was that foreign spies were attempting to penetrate our defences by making contacts by means of dating agencies such as Tinder, Bumble and Hinge.

The story about attempted electoral manipulation was immediately picked up by the mainstream media, winning a banner headline in The Australian and used in parliament by Defence Minister Peter Dutton when he declared that the Chinese government was backing Labor in the forthcoming election. So the Burgess’s report was immediately turned into political ammunition by the right whether that was its specific purpose or not. The least we can say is that the timing was  fortuitous.

But for all the exposure the story was very thin. The purported threat ran like this. At some time in the past prior to an unnamed election a foreign power was using what Burgess called a ‘puppeteer’ whose task was to select a person who might in the future stand for election.

It was here that the so-called plot became increasingly fanciful. To progress the selected target would have to gain preselection for one of the major parties for a winnable seat and succeed at the poll. After that the new member, who had been unaware of the hidden forces behind him or her, could be manipulated despite all the counter influences which are brought to bear on a new member from the electorate, the factions and the caucus.

So was this the best that ASIO could come up with to satisfy the government’s need to find evidence of ‘existing and previous attempts by foreign actors to interfere in Australia’s government and institutions’ and more scary endeavours to undermine our way of life and sovereignty’?

The Threat Assessment was timed to coincide with the opening of Federal Parliament. But it also went forth while large parties of right-wing extremists were swarming around the parliament itself. One has to wonder if Burgess had felt any embarrassment about the burning of the doors of Old Parliament House a short distance away from ASIO’s new palatial headquarters on the other side of the lake?  He was discreetly silent about the outrage.

But to be fair his report had a lot to say about the current wave of radicalisation. That material had no immediate political utility so was largely overlooked. But it is clear that ASIO is not quite sure what can be done about it. Burgess himself is unsure how to categorise it, having declared last March that the organisation was giving up the term ‘right-wing extremism’ because it was no longer fit for purpose having, it would appear, to have provoked Liberal senator Concetta Fierravanti-Wells to declare that ‘many people of a conservative background took exception to the term.’ The problem was that ASIO’s replacement tag of ‘ideological extremism’ had almost no analytical capacity at all.

And this shows in Burgess’s assessment of the rising wave of activism taking place in his own backyard. He points out the untidy array of causes or as he termed it the ‘diverse range of grievances.’ The great diversity of the crowds also challenged ASIO’s way of thinking. So many of the participants are everyday Australians who can’t be easily identified and stigmatised. Can such people be serious about violence?

Many of the actors, he explained, were “newcomers” so it was harder for his operatives to ‘ get a sense of what is simply big talk — and what is genuine planning for violence’. But the greatest weakness of the assessment is the failure to link developments in Australia with what is happening overseas and the growing realisation that it is overwhelmingly American influence which is forcing the right-wing wave forward.

On the same day that Burgess released his Risk Assessment The Washington Post ran a major article inspired by the Canadian Blockade. Similar insurgencies were emerging in many countries. While the movements were ’nationally focused they were internationally linked.’ Canadian police had determined that their troubles had a ‘significant United States element’ including both funding and organisation. Leading Republican politicians had thrown their support behind the protesters. The Post observed that Donald Trump had ‘positioned himself as a global Pied Piper’ orchestrating the turmoil.

The international observers were quite clear that demonstrations in Australia drew inspiration and rhetoric from America. This was the conclusion of The Economist  which observed that QANON was ‘taking off in the antipodes.’ A correspondent for Bloomberg News noted that demonstrators in Canberra carried old ‘campaign banners for former U.S President Donald Trump.’ We must assume that ASIO observers knew what they were.

It was Malcolm Fraser who memorably declared that America was a dangerous ally. Few of our current crop of politicians would dare follow him along that path. Does anyone among ASIO’s legions think so? Are there any officers charged with watching the spreading right-wing tide? Does anyone believe that QANON has taken off here? Will Burgess ever link the current insurgency with the right-wing Republicans? And even if he did would he feel able to say so publicly? It is clearly much safer to discover clandestine plots of little real threat and fret about spies engaging with decent Australians on Tinder.