Asylum policy in UK and Australia – a tale of two nations 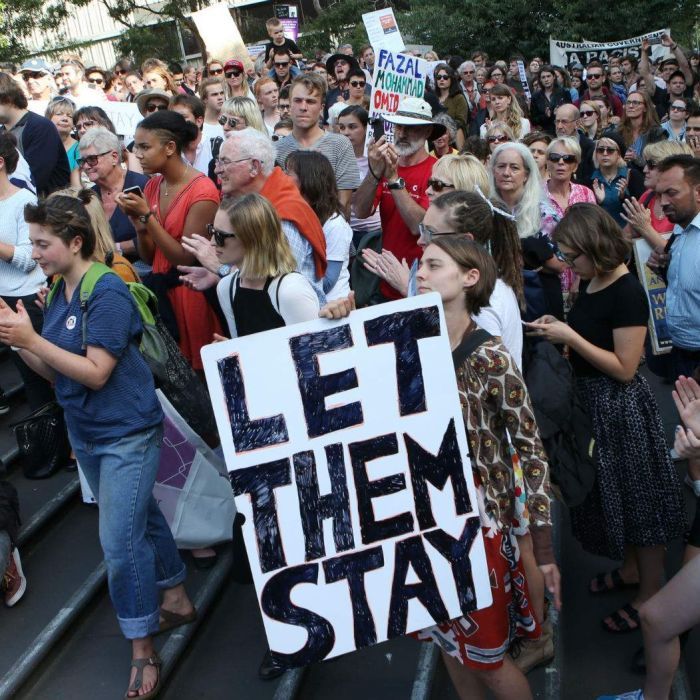 In these two nations, the backlog of asylum applications and that of refused asylum seekers who have not departed is remarkably similar (see Table 1). But debate on the matter in the two countries is very different.

Th UK Government describes its asylum system as ‘open to abuse’ and ‘collapsing’. In Australia, the Government continues to pretend there is no issue, other than in relation to the legacy caseload left over from the Rudd/Gillard Governments. Note the figures in Table 1 largely do not include any of the legacy caseload.

In a recent statement to the UK Parliament, Home Affairs Minister Priti Patel outlined the UK Government’s tough new plan for dealing with asylum seekers. As in Tony Abbott’s Australia, the plan is ostensibly based on a concern about asylum seekers’ safety.

Patel says “people are dying – at sea, in lorries and in shipping containers – having put their lives in the hands of criminal gangs that facilitate illegal journeys to the UK. To stop the deaths, we must stop the trade in people that cause them…our system is collapsing under the pressure of parallel illegal routes to asylum, facilitated by criminal smugglers.”

The UK Government’s says its new approach has three elements:

Firstly, giving priority to those who are re-settled through legal routes – this is similar to Australia’s Humanitarian Program which was reduced to 13,750 from 18,500 in the 2020 Budget.

Secondly, deterring illegal entry by ‘breaking the business model of the people smugglers’. While Australia has been successful in that regard for boat arrivals, this has been far more than offset over the past six years by the biggest labour trafficking scam and abuse of the asylum system in Australia’s history – a scam that was first revealed on Pearls and Irritations almost four years ago. There is no evidence Department of Home Affairs in Australia has done anything about breaking the business model of the agents and labour hire companies who have been running the biggest labour trafficking scam in Australia’s history.

Thirdly, the UK Government intends to remove more quickly those who have no right to remain. In Australia, the Department of Home Affairs has largely given up on removing unsuccessful asylum seekers who do not wish not leave voluntarily (less than 160 removals since November 2019 and less than 10 of these were involuntary – see Chart 1). Home Affairs has also abandoned pursuit of employers who use undocumented labour (see Table 2). 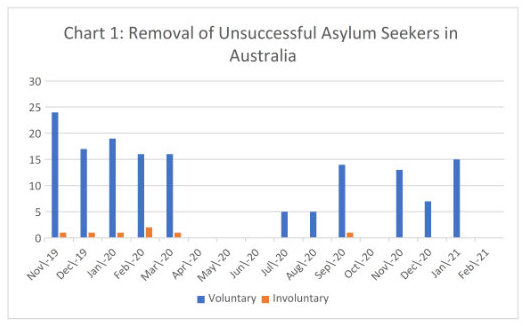 Note: removals in above table are mainly people who have overstayed for a short period and leave Australia voluntarily. Very few unsuccessful asylum seekers voluntarily depart each month and only one or two are removed involuntarily.

The UK proposes that asylum claims of people who have entered the UK illegally having travelled through a safe country first in which they could have claimed asylum will be deemed inadmissible. These people will be subject to removal as quickly as possible and “only where removal is not possible, will those who have successful claims – having entered illegally – receive a new temporary protection status”.

This will not be an automatic right to settle as these people’s claims will be regularly reassessed for removal. These people will have limited access to benefits and limited family reunion rights.
This approach is similar to that taken by Australia for the legacy asylum seeker caseload that arrived by boat under the Rudd and Gillard Governments. People in this caseload found to be owed protection have been granted Temporary Protection visas. But the Australian experience is that people who are granted Temporary Protection visas are rarely returned to their home country – they are simply in immigration limbo at unnecessary cost to them and to the community. The UK appears not to have learned from Australia’s experience.

Patel says the UK will also “seek to rapidly remove those with no right to be here in the UK. Establishing a fast-track appeals process. Streamlining the appeals system and making quicker removal decisions for failed asylum seekers and dangerous foreign criminals. We will tackle the practice of meritless claims which clog up the courts with last minute claims and appeals”.
Australia too has made numerous attempts to limit ‘meritless’ appeals but to little effect. The courts will almost always resist any attempt to limit their ability to consider such appeals.
The promise of ‘rapid removal’ is all very well but once the numbers involved become large, the idea of rapid removal takes on a whole new meaning. No country with a free press and the rule of law has ever achieved rapid removal of large numbers of unsuccessful asylum seekers.

Patel concedes that “there are no quick fixes, or shortcuts to success. But this long-term plan, pursued doggedly, will fix our broken system”.

I doubt Patel is right but the difference with Australia and its labour trafficking scam over the last six years is that the Australian Government does not even want to acknowledge there is an issue let alone develop a plan to address it.

The extraordinary decline in compliance activity undertaken by Australia’s Department of Home Affairs while the number of unsuccessful asylum seekers has boomed says it all – the Morrison Government would prefer to pass this problem onto a future Government.