What people in other forums are saying about public policy

How is the Chinese-Australian community handling the fallout from the Coronavirus, including the fake news, myths and stigmas?

Support for the Palestinian cause has been a badge of honour for Arab countries for over half a century. So why has the response to the US’s Peace Plan been so muted – and in some cases even cautiously supportive?

Andrew Barnes pioneered the 4-day week in his own company: he argues  everyone should follow suit.

The Pick – a monthly look at what people are reading/watching/listening to with relevance to our region.

The ABS Consumer Price Index for the December quarter 2019 reveals a small increase in consumer inflation over 2019.

Over the year there has been a 3.5 per cent fall in electricity prices, but before we all send congratulatory messages to Angus Taylor, it’s informative to consider what’s been happening since the Coalition removed the Gillard Government’s carbon tax. Because of lax regulation of privatised and corporatized distribution and retail companies, electricity prices now are 10 per cent higher than they were during the carbon tax period. See the graph below, constructed from ABS CPI data: 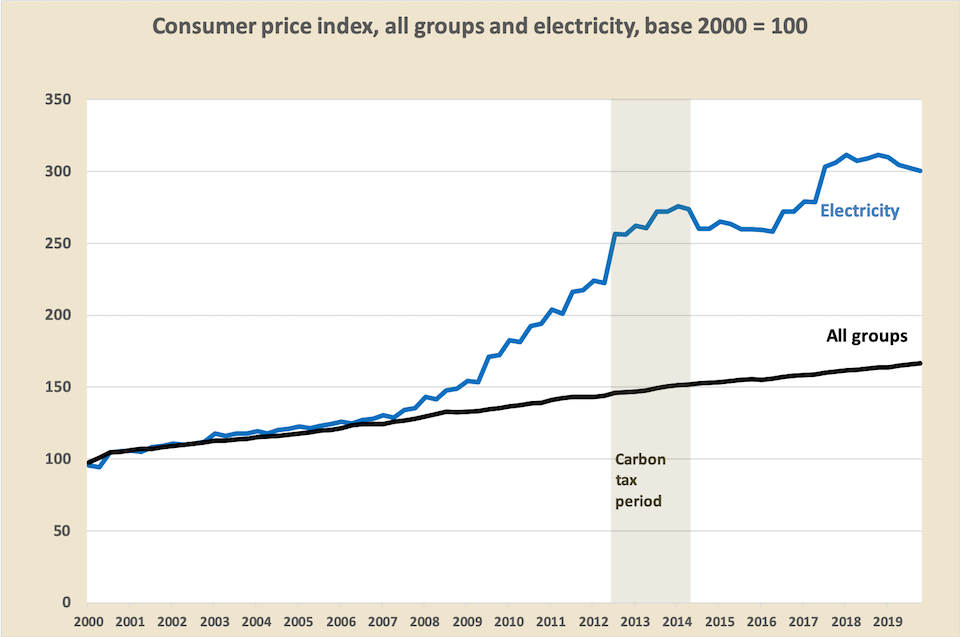 Any effect of the climate crisis on fresh fruit and meat prices is likely to starting showing up in the March quarter 2020 figures.

The Essential Report for this week has no polling on politicians’ performance but it has polling on several issues:

If your guess is “1 in 6” you are more aware of the extent of child poverty  than 68 per cent of Australians, as revealed in a survey commissioned by the Smith Family. The survey finds we’re compassionate and supportive of policies to combat child poverty, but we are unware of its incidence and extent.

The Conversation surveys economists’ outlook for the Australian economy

Twenty-three of the twenty-four economists are at Australian universities. Steve Keen, now of University College London, is the stand-out pessimist. (Does Australia look in worse shape from a distant viewpoint?)

Her article This is how much the typical Aussie has donated to the bushfires is a report on a survey of individual donations – millions of people giving small amounts of money.

The Stockholm International Peace Research Institute (SIPRI) reports on global arms production. With improved data since its last survey, it finds that China is now the second-largest arms producer in the world.  If you click through to its data on arms transfers you will see that the USA and Russia still dominate arms exports, with 36 per cent and 21 per cent respectively. (France is in third place at 6 per cent: will Australia’s submarine contract lift its share?)

Amnesty International has released its Human Rights in Asia-Pacific report for 2019. It draws attention to China’s clamp-down on Hong Kong and its herding of Turkic Muslims into “re-education” camps. India, Myanmar and Sri Lanka are also mentioned for persecution of Muslims.

Their Australian report is extracted separately on their website. As in earlier reports it criticises our treatment of refugees and asylum-seekers, and notes the over-representation of indigenous children in detention. It also mentions the Federal Police raids on journalists, new and proposed restrictions on rights of assembly (Queensland and Tasmania), and our lack of a human rights act.

Ramesh Thakur, a regular contributor to Pearls and Irritations, is interviewed on the ABC’s Nightlife program about Modi’s citizenship law. This law offers Indian citizenship to certain religious minorities from three neighbouring countries, excluding Muslims. A new national database will require Indians to prove citizenship, and India’s 200 million Muslims could find themselves in legal limbo in a country that until recently had poor documentation. Thakur explains that the law has produced a huge and unexpected backlash in India and abroad. Modi does not seem to understand that his large parliamentary majority does not translate into support for his Hindu nationalism policies. He has been flummoxed by a well-organised opposition to the law – a movement that is cleverly united around symbols of Indian nationalism.

Ramesh’s piece runs from 1:02:30 to 1:15:00. The car in the background picture is not his – it relates to another part of the program. Ramesh owns a modest hybrid.

Confused by the US primaries?

Don’t worry, even Americans are confused. Robert Reich has produced a nine-minute video, with an accompanying transcript, answering FAQ’s on “primaries” and “caucuses”.

Is an E.U. carbon tariff on the horizon?

Writing in E&E News (a news outlet covering energy and the environment), Jean Chemnick reports that “E.U. leaders are drafting plans for a border tax on carbon-intensive goods that would penalize other countries that don’t keep pace with the European Union’s climate policies.”

Chemnick suggests that there would be a number of practical problems associated with such a tax. It would be difficult to incorporate into the recent WTO framework, and there is a risk that it would inflame a trade war. It would, however, be in keeping with E.U. general policies relating to international cooperation on climate change – policies which may get in the way of a US-EU trade agreement.

Don’t bring a lump of coal into a boardroom

If we believe the choice between renewables and coal is a “left-right” issue, then we might  believe that the hard left has taken over corporate boardrooms. Around the world companies are abandoning investments in thermal coal. The ABC’s Ian Verrender has written The future of coal has already been decided in boardrooms around the globe: It’s a dim future.

A German view on Brexit

Without the rectitudinous British by their side, Germany will be surrounded by freeloading mendicant states – “those members for whom integration means a joint pot of money with no strings attached” writes a Die Welt correspondent in The Spectator – The agony of Brexit – for us Germans.  “We never thought Britain would actually leave us stranded and alone.”

German media also report that the Scottish Parliament has voted 64 to 54 votes for a second referendum on independence from Britain. (Schottisches Parlament fordert zweites Unabhängigkeitsreferendum. Perhaps unsurprisingly we cannot find a translation in the British press).

Putin’s constitutional changes, in which powers are transferred from the presidential executive to the parliament, are widely seen as an attempt to set himself up as leader for life, because his time as president, limited to two terms, ends in 2024.

Writing in Social Europe – Russia’s path toward a better political capitalism – Branko Milanovic has a more nuanced interpretation. One of Putin’s objectives, he writes, “is to ensure that the transition from himself to a new leader does not lead to another bout of lawlessness or revolution, as has often happened in Russian political history”. Also it is to ensure that Russia’s present economic difficulties do not lead to chaos – another unfortunate Russian tradition. And while he might not hold the highest office after 2024, Putin will still be exercising power in the background, as did Singapore’s Lee Kuan Yew in his role as “minister mentor” after he stepped down as prime minister.

Milanovic’s interpretation of Putin’s move is similar to that of Deakin University’s Elizabeth Buchanan, who wrote in The Australian “Putin’s plan is not a Machiavellian effort to cling to power; it is about fortifying Russia and future-proofing the system.” – Vladimir Putin’s vision for a stable Russia (paywalled).

Politicians seeking to denounce socialism point to Venezuela’s poverty and mayhem as their prime exhibit.  It is true that Hugo Chávez’s “chaotic expropriations, disastrous price and currency controls, stifling regulations, and unbridled hostility toward the private sector” had disastrous consequences, write Moisés Naim and Francisco Toro in Foreign Affairs. But in their article Venezuela’s Problem Isn’t Socialism they point out that the country’s problem is its slide into kleptocracy – “the takeover of its resources by a confederation of ruthless criminals from both inside and outside the country”.  The country they describe is one corrupted by a collapse of democracy many years ago; it has nothing in common with the programs advocated by social democrats in liberal democracies where the rule of law holds.

January 27 was the 75th anniversary of the liberation of the Auschwitz extermination camp by the Red Army. Two articles in The Strategist (in a venture with Project Syndicate) are about the way political interests can obscure the learning we should draw from the Holocaust.

Mark Leonard’s Auschwitz and the politicisation of history is a reflection on the speeches at the memorial ceremony at the Jerusalem’s Yad Vashem memorial. He contrasts the nationalist messages of Russian and Israeli politicians with the messages of reflection and contrition by the French and Germans. (Poland’s right-wing government boycotted the event.)

Dominique Moisi’s The geopolitics of Holocaust memory also regrets that the Holocaust “has become an event to be ‘spun’ for political gain in a world that has learned virtually nothing.” She is concerned that while young people are legitimately mobilised around climate change, they are disengaged with politics: “how can we convince them that ecological awareness is not a substitute for concern about freedom and democracy, but rather complementary to it?”

On the ABC’s Religion and Ethics Report, Andrew West interviews Jessica Whyte, author of The morals of the market. Whyte explains how influential neoliberal thinkers Ludwig von Mises, Friedrich Hayek and Milton Friedman sought ideological alliances with conservative Christian thinkers, particularly conservative Catholics. She goes on to explain (but not defend) the extraordinarily twisted reasoning whereby neoliberal thinkers were able to reconcile the coercive violence of Chile’s Pinochet regime with their construction of freedom. To paraphrase the argument, it’s that people whose thinking has been corrupted by communitarian values must be forced to submit to the freedom of the market.

She sees in neoliberalism a philosophy that attempts to “depoliticise” society: that is, to make the boundary between the market and the state not a matter of democratic choice, but an indisputable, unchallenged and accepted condition.

On a similar theme (using different terminology), Mark Ganza writes in Areo about the ideological conflict between traditional Christianity and libertarian capitalism – Understanding conservative anti-capitalism. Traditional Christians see freedom as power over their own desires, whereas capitalism “makes people lessfree, by allowing them to more easily satisfy their desires.”

A Pearls and Irritations reader who grew up in the NSW outback has sent a link to Emma Young’s article  in the Sydney Morning Herald – Death by a thousand cuts: the industry doing ‘more damage than mining’.  It’s about lax and under-funded regulation of Western Australia’s pastoral zone (known as the “southern rangelands” covering 40 per cent of the state). Although much of the land has been assessed as unviable for grazing, and many properties are severely overstocked, the state government goes on renewing the leases of the zone’s 285 stations without enforcing land management regulations.

Young’s article draws on the work of David Pollock of Wooleen Station, whose book The Wooleen way: renewing an Australian resource describes how he and his partner have been managing their station with low stock numbers, rotational grazing, rehabilitation and other means of sustainable management. It’s tough for responsible producers when such practices are not the norm for the industry, and when there is no commercial incentive to manage the land sustainably.

A role for Bridget McKenzie

As rumours circulate about Bridget McKenzie resigning or being dismissed, at least one organisation is examining how her skills can be put to good use.