AUKUS: How to make friends and influence neighbours the Australian way 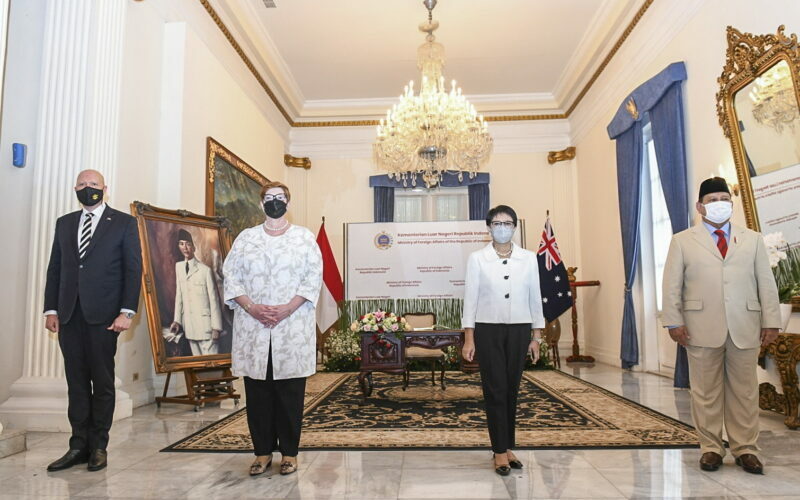 First, a couple of ministers pop in on their way elsewhere. They pronounce warm relationships. A swap of bromides, nice photos, some pressies of vaccines to save lives and military gear to end them. Then hey ho, it’s off to the big show.

A week later the host gets woken around fajar (the pre-dawn prayer) to be told by the Pal Down Under of detail she forget to mention on the earlier trip: “Wouldn’t normally bother you with trivia, Bu Retno, but the media will beat it up so best you hear about our latest acronym first from the horse’s mouth.

“AUKUS is a bit like ANZUS minus the Kiwis but plus the Brits. We’re linking with the UK and US to build you-beaut nuclear-powered subs to cruise around your archipelago, help make you safer.

“Not to worry. They won’t submerge till long after our careers plunge into retirement. Ha, ha! The fleet may have Tomahawk cruise missiles but won’t be carrying nuclear weapons. Well, not yet.”

As previously reported on this website, the September 9 meeting in Jakarta between Foreign Minister Marise Payne and her Indonesian counterpart Retno Marsudi produced an abundance of blah and a dearth of policy to advance the relationship.

Likewise the chat between Defence Minister Peter Dutton and Prabowo Subianto, Indonesia’s version of Donald Trump. The furious loser in the 2019 presidential race is now defence minister, and apparently didn’t even get a courtesy heads-up about AUKUS.

What hasn’t been denied is that the Indonesians weren’t just left in the dark about the trilateral deal — they were more in a sensory-deprivation regional policy cell.

It took more than a day for Marsudi’s spokesman Teuku Faizasyah to craft the appropriate language and tone. In a statement published in English, he said Indonesia “takes note cautiously” of AUKUS while “deeply concerned” about an arms race and “power projection in the region”.

The rest was motherhood stuff about peace, stability, security and pleas to “advance dialogue”. Marsudi stayed silent. Nothing that might lead to a recall of ambassadors, but it did draw a subtle Javanese rebuff.

The Sydney Morning Herald reported plans to meet Joko Widodo on Prime Minister Scott Morrison’s trip back from the US and explain why our “good mate” wasn’t consulted were erased when the president remembered he had other elbows to bump in the provinces.

When Payne and Dutton were in Jakarta earlier this month they proclaimed a strong and respectful relationship. A week is a long time in foreign affairs.

The Jakarta Post headlined the local reaction to AUKUS as “RI tells off Australia” but the scolding was done with a room-temperature tissue. The reality is that while RI is publicly offended by the distrust, it’s privately relieved others will be getting their hands dirty in handling China’s expansion while fearing collateral damage should the big egos clash.

Surprisingly the soberest warnings haven’t come from the peace lobby but a military man, former Australian Defence Force chief Chris Barrie channelling Winston Churchill: “If we are not using every element of our national power to try and avoid going to war-war instead of jaw-jaw, then we’re making a very serious mistake.”

Although geographically central, Indonesia and its ASEAN partners will likely become “strategic observers” of AUKUS. The Republic has a long-held non-alignment policy and a military ill-equipped for ventures beyond the oppression of domestic dissent.

It also stays in the back row of the bleachers for the US-India-Australia-Japan Quad, which Payne calls “a diplomatic network of like-minded democracies”. Indonesia is the biggest player in the region and the world’s third-largest democracy so should have a front-row seat in the “security dialogue” if not a place on the ground. Its absence is mainly its fault, but fears the Red wrath searing the economy should it barrack for the West.

Beijing (along with Hong Kong) is the largest investor in Indonesia with most money going into ports, roads, railways and mineral processing plants. This is the hand the world’s most populous Islamic country doesn’t want to bite, even though it’s also allegedly throttling the faith of millions of Uyghur Muslims.

The coordinates where the compass needle could go awry are in Indonesia’s Natuna Regency a mini archipelago of 150 or so mostly unoccupied islets 1145 km north of Jakarta in the South China Sea. That makes it sound irrelevant, but more than 60 per cent of global maritime trade passes nearby every year.

A few days before the AUKUS reveal, Kompas daily reported fishers spotting Chinese boats in the zone. The Indonesian navy hoisted tact and claimed no proof of infringements. In January 2020 tales of incursions led to Widodo on a warship reminding potential poachers of his republic’s exclusive economic zone. Beijing claims fishing rights within an imagined “nine-dash line” unrecognised in international law.

In her Jakarta speech this month Payne talked up the Association of Southeast Asian Nations 34 times saying: “Australia’s vision for the future of our region has ASEAN at its centre. It’s principally a shared vision, underpinned by shared principles.”

That was a week ago. To be polite, it’s not only outdated but nonsense. AUKUS is a settled take-over as three senior members of the Anglo empire move in on South-East Asia, elbowing aside the long-established ASEAN which was never consulted or mentioned in the joint leaders’ statement.

The pith helmets are back, though now made of bullet-deflecting steel. By Jingo! All we need now is Rudyard Kipling.