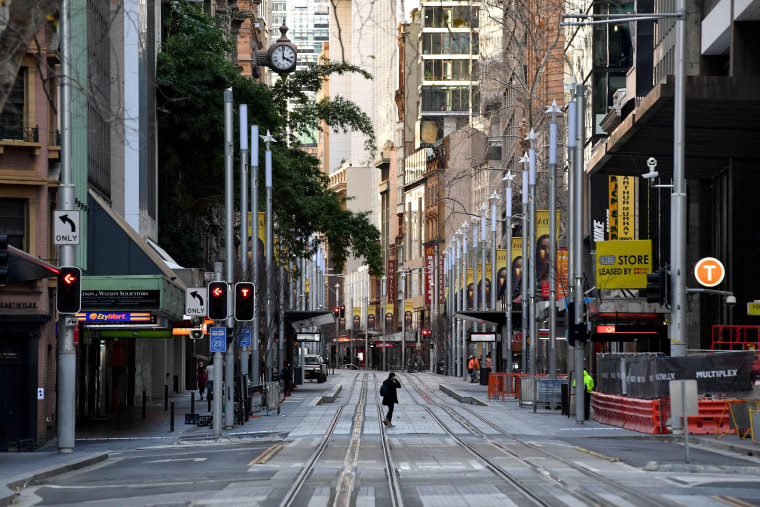 A pall of unease hangs over Australia, yet it’s hardly acknowledged. The government’s failings and the implications of ill-judged policies preoccupy more insightful commentators. But it may be time to consider the ills of society as a whole.

The unease is pervasive. We all experience it, though in different ways. For some it is the frustration of life in lockdown. For others, it is the insecurity of employment and income. For thousands it is the physical and emotional deprivation that comes with homelessness. For others still, it is the unrelenting march of climate change and the prospect of drought, bushfires, floods and other extreme weather events. For our First Nations it is the constant reminder that reconciliation is still a distant dream.

The sources of our anxiety run deep. In much of the country, we observe an inchoate but palpable angst about security threats, which political elites and mainstream media are only too happy to feed. The Islamist threat one day, the China threat the next.

Others are dismayed by the rising tensions with China and the risk of war which they associate with Australia’s ever closer alignment with US interests and strategic priorities.

For those who have profited handsomely from our flourishing trade with China, recent developments are cause for apprehension. Could the crumbling China market for Australian wine, the parlous condition of university budgets or the woes of the tourism sector be a taste of things to come?

The list is hardly exhaustive. We need only think of refugees and asylum seekers, recently arrived migrants confronted with a police and military presence on their doorstep, and an entire younger generation who feel locked out of the housing market.

The discontented are clearly diverse, as is the way discontent is experienced. Some feel abandoned. Ohers feel cheated. Others still are disoriented by powerful currents they neither control nor comprehend. Some feel disenfranchised. As the anti-vaccination riots have shown, a small but not insignificant minority is seething with rage.

How is Australia reacting to these fears and uncertainties? Here again, different groups are reacting differently. Three types of response can be readily identified.

The democratic crisis: Whatever happened to courage, principle, commitment, accountability?

A relatively small group, consisting primarily of political, business, professional and media elites, whose interests are served by existing arrangements, continue to observe the formalities of political engagement.

Some, including senior civil servants, advisers and others, believe that in doing so they can still serve their country honourably. Others, though paying lip service to high sounding principles, are prepared to entertain harmful, corrupt and even illegal practices if they like their chances of getting away with it.

A second, much larger number, perhaps a majority of society, choose not to respond in any overt or coherent way. They have given up on the formal political process. They tend to view political parties and their leaders as self-seeking, untrustworthy, and often incompetent.

They have largely switched off from politics which they regard as distinctly unhelpful or at best irrelevant to the demands of everyday life. Yet, even if unconsciously, they still absorb a good deal of the cultural and political messaging to which they are constantly exposed, courtesy of the dominant media, both old and new.

A third group, made up of largely of intellectuals and activists, tends to focus on specific problem areas. A good number of journalists, academics and other commentators make it their business to analyse policy failings in their areas of interest or expertise. They may point to inadequacies in the way government is handling the pandemic, the flaws of fiscal policy. or the ill-advised AUKUS agreement.

The activist component of this third group includes the innumerable voluntary organisations which provide practical support to the needy, the marginalised, and the discriminated. It also includes those which engage in education, advocacy, and protest in response to the many challenges we face, be it homelessness, gender inequality, sexual harassment in the workplace, or climate change.

The contribution, intellectual and practical, of this third group cannot be underestimated. It is civil society in action, exposing the fall-out from our faltering decision-making processes, and picking up the pieces wherever possible.

But there is little reason to think that these efforts will be enough to dispel the unease or address its many causes.

We need a new narrative that addresses the profound transformation of Australia’s economy, society, culture and environment over the last several decades, and the seismic global shift in geopolitical, civilisational and economic relationships, as well as in the planet’s fragile ecology.

Such a narrative has to give due weight to promising new directions, but also to the roadblocks that stand in the way.

In important respects our political parties as presently constituted are a major obstacle. They are largely responsible for the present state of virtual paralysis which afflicts our parliaments and other political institutions. They suck the oxygen out of the political spaces in which such a narrative might emerge.

Other not unrelated roadblocks include the simplistic but influential optimism peddled by technological enthusiasts and the vacuous dogmas of liberal ideology.

Needless to say, a new, coherent and compelling narrative of Australia’s past and future cannot be constructed overnight or from the top down. It has to emerge organically from the diverse efforts of civil society.

The issues to be addressed are many and varied. Each has its own complex history, its own set of protagonists, different connections to government and different social and economic implications.

On the other hand, there are crucial interconnections. Bringing together different policy areas can over time widen and strengthen the constituency for change. For example, it is difficult to see how climate change can be addressed without at the same time devising economic arrangements that ensure the wellbeing of communities affected by the closure of fossil fuel industries.

All the indications are that over the next decade Australians will need to take stock of what has been one of the most barren periods of Australian history. Energy policy, the “stolen generation”, the ownership and control of mass media, the future of the university, the steady erosion of civil liberties, our engagement with Asia and China in particular, the US alliance, all urgently require public attention. The underlying institutional failings common to many of these issues cannot be shelved or allowed to simmer indefinitely.

The precise sequence of events cannot be predicted, but emerging domestic and international trends suggest that a comprehensive review of Australia’s institutional arrangements is well overdue. The shift to a republic — symbolically important no doubt — is but one of the many issues that warrant extensive discussion.

In time much will be gained from reviewing this or that clause of the constitution, including the balance of functions between the federal and state tiers of governance, and the functioning of the federal Parliament. But before we reach this stage, we need a process of deliberation as a prelude to framing a charter or declaration of principles.

The charter would articulate a conception of governance and citizenship attuned to Australia’s radically altered demographic and cultural circumstances. It would pay particular attention to the continuing disregard of the rights of our First Nations. It would reflect a new awareness of the economic and political imperatives of a globalised world and the dramatic geopolitical and civilisational shift from West to East.

Such a declaration might form the preamble to a revised constitutional framework. It would reflect a new understanding of who we are, where we have come from, and where we are heading.