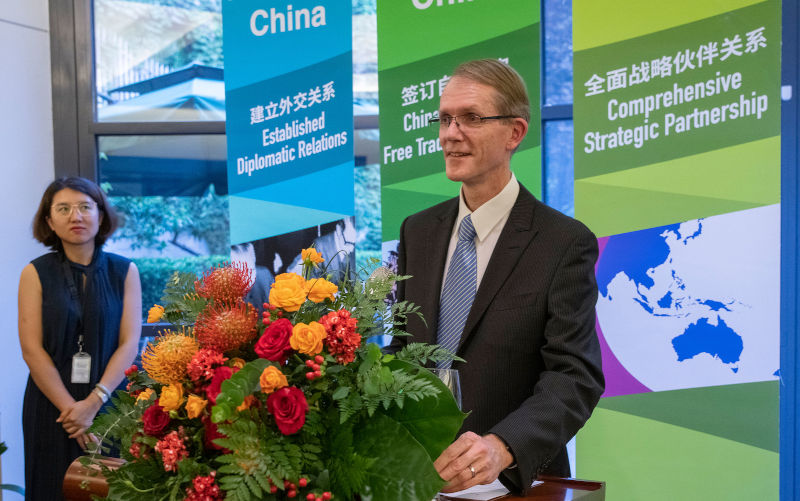 China’s refusal to deal with Australia at Ministerial level is likely to frustrate its effort to join an important Pacific trade agreement.

In a statement issued on his arrival in Australia in January the new Chinese Ambassador to Australia, H.E.Mr Xiao Qian, set himself a big task. He noted that China-Australia relations were at “a critical juncture”, but said that he looked forward to “working with the Australian government and friends in all sectors to….jointly push relations back to the right track”. He said that “as long as both sides adhere to the principles of mutual respect, equality, inclusiveness and mutual learning and firmly grasp the right direction of the development, the China-Australia relations will keep moving forward and make further progress”.

According to media reports Ambassador Xiao has embarked on a busy program of introductory calls, including Foreign Minister Payne, former Prime Ministers, and leading Opposition and business figures, and has hosted at least one well-attended function designed to celebrate the positives in China-Australia relations.

Many in Australia would like to see China-Australia relations improve, and there is no shortage of critics of our own government’s actions, such as leading the international charges against Huawei and China’s role in the origins of COVID, which have contributed to their deterioration. But there is one stance by the Chinese government which is aimed directly at Australia and is certainly an obstacle to progress, in a very important and practical field.

This is the Chinese government’s apparent decision, dating back to early 2020, to freeze all contacts with Australia at Ministerial level or above, to the extent of refusing to respond to attempts by Australian Ministers to talk even by telephone to their Chinese opposite numbers. In line with this policy in May last year China suspended the China-Australia Strategic Economic Dialogue. The last high level meeting between the two countries seems to have been the Australia-China High Level Dialogue held in Sydney in January 2020, co-chaired by former Prime Minister Howard.

The absence of Ministerial contacts and exchanges has not meant a complete break in communications, as Australian Ambassador to China Graham Fletcher explained in a public lecture while in Australia last August. The two Embassies have conducted the bulk of the exchanges that have taken place, but that does not amount to engaging in the way we would like to.

However this “Chinese freeze” is not without consequences. Australia is a member of the cumbersomely named “Comprehensive and Progressive Agreement for Trans-Pacific Partnership”, the successor trade agreement which Japan and Australia managed to keep alive after the US, under Trump, pulled out of the TPP which it had initiated. It already has a significant membership, and a number of countries, including Britain, South Korea and Thailand, have since expressed interest in joining, as has Taiwan. Last year China too expressed interest in becoming a member, an interest publicly endorsed by President Xi himself.

A provision of the arrangement however is that any new member must be approved by all existing members, so China needs Australian approval of its application. One might have thought that the state of relations, and in particular China’s use of economic penalties against Australian exports to it of products such as wine, coal and barley in response to positions taken by our government on non-economic issues, would have meant that China would not have sought Australian agreement. But it did, in a submission in September last year from the Chinese Embassy to the Australian parliamentary enquiry underway into whether the CPTPP membership should be expanded.

The submission was remarkable in the circumstances, written as if the deterioration in relations, and China’s use of economic coercion, had not happened. It asserted that the implementation of the China-Australia Free Trade Agreement had “led to rapid development of our bilateral economic and trade relationship”, and had created “favourable conditions for deepening, broadening and improving our bilateral economic relationship”. (In fact overall the volume of our trade with China has proved remarkably resilient to Chinese obstacles, but that has been despite, not because of, Chinese intentions.)

In response to the Chinese approach Trade Minister Tehan has from the start said that the Chinese application is naturally of high importance, both in relation to issues directly affecting Australia like the import restrictions, and in relation to China’s intention and ability to adhere to various standards endorsed by the CPTPP, for example in regard to state-owned enterprises and to labour practices. In his view, and according with Australian practice, these would naturally be discussed at the Ministerial level with his Chinese counterpart, as had been the (productive) case with Britain, for example.

Minister Tehan repeated this position as recently as a few days ago in an on-line interview with Su-Lin Tan of the “South China Morning Post”, reported in that paper on 22 March.

So there it is; what will China do? On the one hand, in a fit of “Middle-Kingdom-itis” the Chinese Government apparently decided that it would not deign to engage with members of a government which was so critical of some of its actions and enterprises, and therefore in its view was opposed to its interests. On the other hand, on the issue of accession to the CPTPP it has spoken in a way much more akin to what had for decades been the pervading tone of the relationship. It has sent a senior and distinguished Ambassador to Australia, clearly with instructions to repair the relationship. Will that stretch to Ministerial contact? That would clearly be in line with the emphasis on “mutual respect” in the Ambassador’s arrival remarks. We await the next installment.