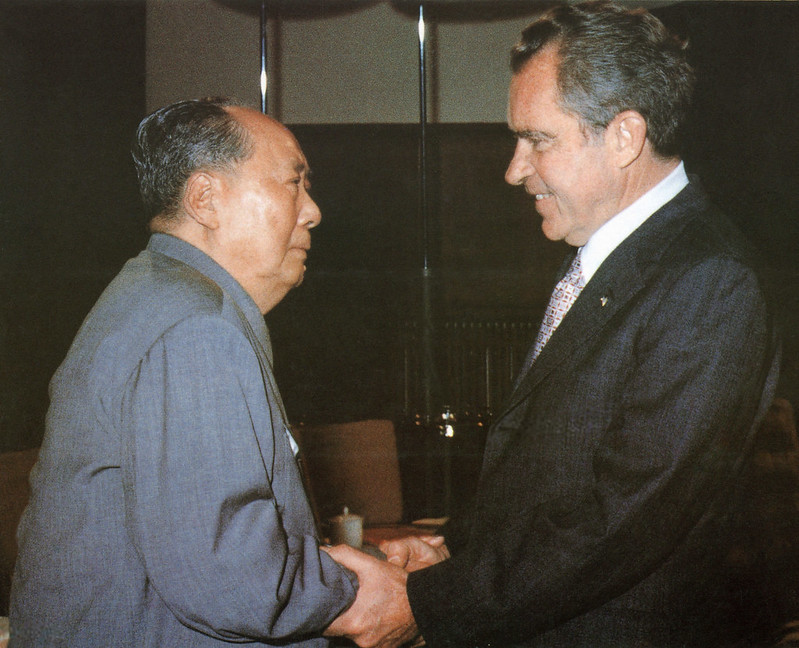 Rather than hurling insults, which has become all too common, Nixon’s is the path that accords with everyone’s interests, including Australia’s. (Image: Flickr / manhhai)

A badly timed but generous initiative by the new Chinese Ambassador Xiao Qian has not prevented the Australia-China bilateral relationship from sinking further into the mire.

Global disasters and self-righteous and arrogant Australian leaders have not helped, to put it mildly. And we have just been celebrating the fiftieth anniversary of United States President Richard Nixon’s visit to China (21 to 28 February 1972), which he claimed as “the week that changed the world” towards a helpful and sustainable relationship with China. Rather than hurling insults, which has become all too common, Nixon’s is the path that accords with everyone’s interests, including Australia’s.

On 24 February 2022, the newly appointed Chinese Ambassador Xiao Qian held a function at the Chinese Embassy to honour Senior Constable Kelly Foster, who had been killed in a vain attempt to save the life of a Chinese student, Jennifer Qi. It was the first public Chinese Embassy function since the onset of COVID-19. In a speech during the event, Xiao called for a reset in China’s relations with Australia, saying China was prepared to go halfway in negotiations. He said he thought the relationship was very important for both sides.

I happen to agree with him. This relationship is extremely important, for Australia especially. You’d have thought this generous gesture, taken just four days after the conclusion of the generally successful Beijing Winter Olympic Games might have been interpreted as conciliatory, a kind of sign that China is interested in a reset of relations.

Not a bit of it! Australia’s leaders, Prime Minister Scott Morrison and Defence Minister Peter Dutton in particular, had shown themselves much more interested in mocking China and everything to do with it, than in any reset. Morrison has even tried to use the China card to help him win the forthcoming election.

In recent weeks, a row of issues has worsened the already bad relations between the two countries. Just two examples, among many! The Peng Shuai incident is constantly used to portray China as a misogynist, discriminatory place, even though the actual facts show nothing of the sort, as Gregory Clark has ably shown in Pearls & Irritations (9 February 2022). When, on 22 February, the Morrison government announced $800 million over ten years for the Australian Antarctic Program, most assumed the main motivation was to counter China’s growing interest in Antarctica.

But then the week before Xiao’s gesture, Morrison accused the ALP as “soft on China”, charging that the Chinese government’s preferred candidate was Albanese. His evidence: an article in the Global Times by Bruce Haigh, who on 27 February aptly showed in Pearls & Irritations that the interpretation was nonsense and at best “mischievous”. On 16 February, Morrison also suggested in Parliament that the ALP Deputy Leader Richard Marles was disloyal to Australia, on the basis of a speech he had given at the Beijing Foreign Studies University. Morrison even called him a “Manchurian candidate”, in other words a traitor, though to be fair he withdrew the accusation. What was very clear was that he was trying to use the China issue in an underhanded way to win support at the federal elections due by May. To me this is toxic and beneath contempt, showing war hysteria undergoing a crescendo. I also resent the self-righteous manner in which Morrison makes such accusations, as if his hostility to China makes him not only sensible but also virtuous.

Since Xiao Qian’s gesture of 24 February, things have got even worse. The war in Ukraine, beginning the same day, focused more hatred on Russia, but Morrison and Dutton seemed very keen to castigate China as an accomplice in evil. Dutton commented on China’s refusal to join in Western sanctions against Russia by saying: “This is really deeply disturbing, that China has essentially encouraged Russia, and China is the one country that could pick the phone up to President Putin now and say, ‘Turn back and pull back from this dreadful mistake that you’re making’.” Morrison described China’s refusal to condemn Russia and to sell it wheat and barley as “unacceptable” because it was throwing “a lifeline to Russia in the middle of a period when they are invading another country”. ALP leaders insisted on being bipartisan in anything involving national security.

Both Government and Opposition condemned China’s abstention in the United Nations Security Council vote on Ukraine. When Shadow Foreign Minister Penny Wong spoke on the ABC’s Insiders programme on 27 February, she gave a detailed critique of China’s policy. When asked her reaction to India’s decision to abstain, she was quite reticent.

Others have canvassed the rights and wrongs of Russia’s invasion of Ukraine. My own view is that invasion of another country is illegitimate and will probably lead to a humanitarian crisis, but that Russia has good reason to demand a halt to NATO’s eastward expansion and a guarantee that Ukraine will not join NATO. It seems to me that the United States and the West in general in effect declared a cold war against Russia and China a while ago. It is common sense for these two countries to get together, which they have been doing for a while. It was also nothing more than common sense to sign a “joint statement” when Putin visited Beijing for the opening ceremony of the Olympic Games (4 February 2022). For Dutton to demand that China’s leadership should “pick up the phone” to lecture Putin on the West’s behalf seemed to me both naïve and insulting.

One point that emerges constantly is the suggestion that the Chinese are watching the Ukraine situation with a view to carrying out their own incorporation of Taiwan. I think that is unlikely, but it can’t be ruled out entirely.

Let’s remember that exactly half a century ago, United States President Richard Nixon finished his famous visit to China with the Shanghai Communique. According to that extremely important and authoritative document, “The United States acknowledges that all Chinese on either side of the Taiwan Strait maintain there is but one China and that Taiwan is a part of China. The United States Government does not challenge that position. It reaffirms its interest in a peaceful settlement of the Taiwan question by the Chinese themselves.”

The Chinese leaders are prepared to wait. What worries me about recent developments is that the West in general, and the United States and Australia in particular, appear to have abandoned their refusal to support an independent Taiwan. Biden actually invited a Taiwan representative to his inauguration. It was not only the first time an incoming president had done so, but there was no representative from Beijing. That seems extremely provocative to me.

Morrison and Dutton regularly assume that for China to attack Taiwan would be like attacking another nation and hence criminal. They assume that, if the Americans get involved in a war with China over Taiwan, Australia will automatically join in, against China. Now that Taiwan is a democracy, so the theory goes, it must be protected from any move from China towards reunification. And Joseph Wu, who claims status as the Republic of China’s foreign minister, is keen to go around the world promoting this view.

My own view is that our continual rebuffing and criticizing everything China does as criminal or insincere, even when it’s giving aid to Tonga or sending out vaccines, while at the same time cosying up to Taiwan, is both dangerous and against our interests. I hate to think where this is leading us.

What we need instead is to try and reset relations with China, avoid provocations, treat China with respect and try to follow the path of peaceful relations set down by the Shanghai Communique, the fiftieth anniversary of which we celebrated on 28 February.