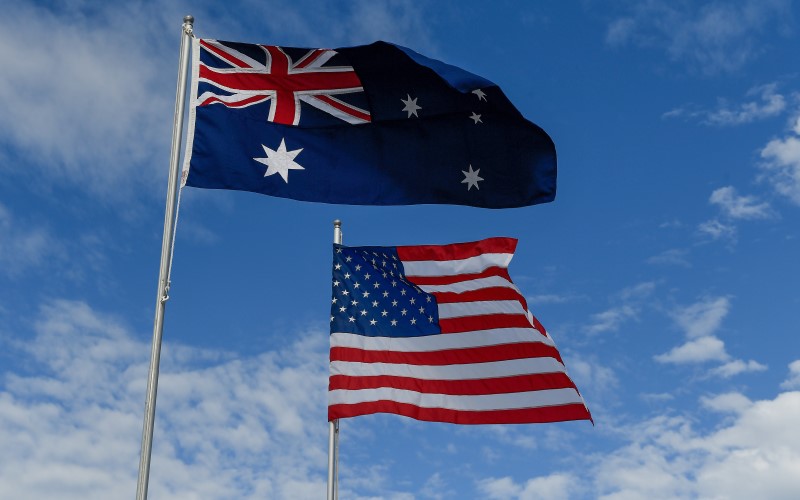 Australia must learn to better manage its relationship with the US. (Image: AAP/Albert Perez)

Australia can end its subservience to the US without jeopardising ties – but it needs political courage and better management of the alliance.

Thomas Jefferson, the third president of the United States, in his first inaugural address on March 4, 1801, called for “peace, commerce, and honest friendship with all nations, entangling alliances with none”.

Unfortunately, his country did not heed his words. Australia also has not heeded those words and is entangled in an alliance with a country that former prime minister Malcolm Fraser said was a dangerous ally. He also said, in his book Dangerous Allies, that Australia had become a subservient partner in that alliance, believing it desperately needed the military protection of this powerful ally and was prepared to follow that ally into illegal and morally unjustifiable wars to maintain that protection.

An independent defence policy for Australia would refute that position. And in establishing an independent foreign policy and an independent self-defence force, the alliance with the United States would need to be managed and adjustments made, including Australia acting independently in pursuit of the best interests of its people when necessary.

Fraser said in his book:

“Strategic independence does not mean ending our relationship with America and cutting our ties. It does mean having a different relationship, a more equal one in which we can feel free to say no or offer a differing opinion… Strategic independence would allow Australia to agree or disagree with both Washington and Beijing as it suits our interests. We should not be afraid to express our views and stick to our beliefs.”

Canada, for example, has done this in the past without jeopardising its close relationship with the US. Canada did not commit troops to the war in Vietnam or Iraq as these did not involve its strategic interests. New Zealand is still in ANZUS but does not allow US warships or those of any country into its ports unless they declare they are not carrying nuclear weapons. As US warships will not give that declaration, they are blocked from entering New Zealand ports.

There have been at least two occasions when Australia has acted independently from the US. Emma Shortis in her book An Exceptional Friend says that Australia took the opposite position to the US by supporting the United Nations treaty banning mining in the Antarctic and by opposing the apartheid regime in South Africa. So these precedents show that Australia can take an independent position within the alliance without ending it.

Management of the alliance, therefore, includes making decisions in the best interests of Australia to safeguard sovereignty, promote peace and keep out of unnecessary wars.

Defining Australia’s essential strategic interests is a starting point. For example, in the current situation faced by Australia, the advice of former prime minister Paul Keating should be considered: “Taiwan is not a vital Australian interest. Let me repeat that – Taiwan is not a vital Australian interest. We have no alliance with Taipei, none. There is no document you can find. We do not recognise it as a sovereign state right.”

Asserting our interests would involve advising the US and the UK that Australia does not see Taiwan as an essential strategic interest and will not be militarily involved in the defence of the island against any military action by China.

The next step in adjusting Australia’s relationship within the alliance is to advise the US that Australia plans to restructure its military to concentrate on territorial sovereign defence. That restructure would include provisioning for this role and a reassessment of the best submarine acquisition for local coastal territorial defence.

Asserting such a restructure of the Australian Defence Force would be in line with what the US has frequently asked of its allies under various presidents including Barack Obama and Donald Trump. They wanted their allies to carry more of the burden and financial load of defending their territories while remaining within their US alliances. So a move by Australia to take responsibility for its territorial defence should not only be understood but welcomed by the US. Deciding against nuclear-propelled submarines, which are designed for long-distance operations, in favour of diesel-electric versions more suitable for coastal defence might, however, draw the ire of certain military-industrial corporations.

Surveys show that Australians strongly support the signing of the UN Treaty to Prohibit Nuclear Weapons (TPNW), believing it will make Australia safer. In implementing the will of its people and acting independently in the nation’s interests, the Australian government would need to advise the US that it will sign the TPNW and then determine what adjustments must be made to ratify and comply with the treaty.

Subsequently, Australia would have to advise that in ratifying and complying with the TPNW, it was giving the required one year’s notice to the US that:

These are all decisions which can be made by an Australian government implementing an independent foreign policy without withdrawing from the alliance with the US but better managing Australia’s place within it.

Unfortunately, the current position is that both major political parties show no inclination to adopt anything less than a subservient position in the US alliance, displaying grovelling acquiescence to US foreign policy and its increasing use of Australia as its South Pacific military base. The desire for an independent foreign policy and keeping Australia out of US wars is espoused by a small but increasing section of the Australian community. Until that voice is strong enough to move political parties, we are unlikely to see a government assert itself and make these independent decisions in the best interests of the Australian people.