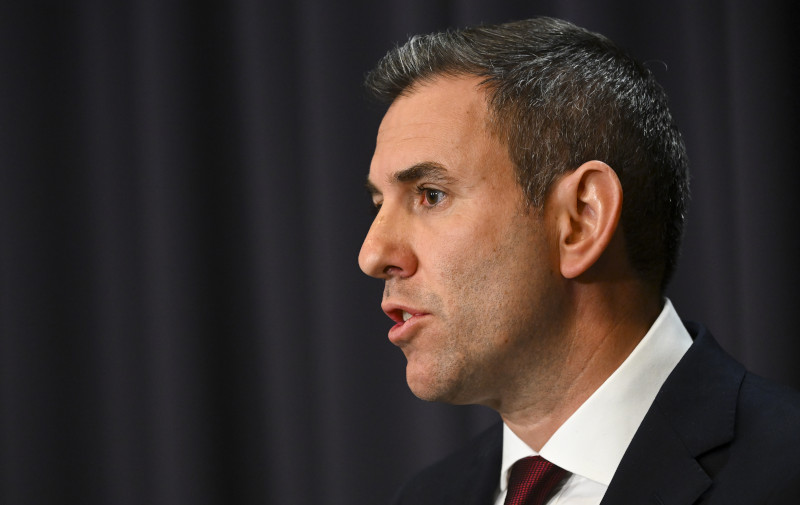 Jim Chalmers is a wily operator. Ahead of delivering his first budget next Tuesday, he has given himself room to do the things a treasurer needs to do.

For a while, his predecessor Josh Frydenberg denied himself that room. In his first budget as treasurer under Scott Morrison ahead of the 2019 election, Frydenberg promised to get the budget “back in the black”.

That 2019 budget forecast increasing surpluses as far as the eye could see (which was ten years, the limit of the graphs presented in the budget papers). The Liberal Party began selling “back in the black” celebratory mugs at A$35 each.

The trick was that from then on, government spending would grow more slowly than the rest of the economy. As a proportion of GDP, it would slide from around 25% to 23.6% by 2029-30.

For that to happen, all sorts of government programs would have to become and stay less ambitious for ten years. But instead of details, Frydenberg’s department gave us gobbledegook – such as that lower payment projections had been

driven by lower than expected payments across a range of programs in the forward estimates flowing through to the medium term.

It made substantial extra spending near-impossible.

The 2019 budget assumed that the cost of National Disability Insurance Scheme couldn’t blow out (it has), that governments couldn’t spend more in response to aged care and disability royal commissions (they’ll have to), or pay aged care workers the big rises the Fair Work Commission is about to award, and so on.

COVID changed everything – except the tax cap

Just about every fairly foreseeable crisis couldn’t be responded to, if the assumptions in the 2019 budget were to be believed.

Not even by raising more tax. A separate “tax cap” set out in the budget said the government would never collect more than an arbitrarily chosen 23.9% of GDP.

Frydenberg tied his own hands in a way a treasurer who wanted to take charge of the nation’s finances would not have.

Until COVID. Within a year, Frydenberg junked the “back in the black” pledge and spent big, because he had to.

But he kept in place the bizarre 23.9% tax cap. The Liberal Party campaigned on it in the election, challenging Chalmers to adopt it.

No tax cap – but what comes next?

But here’s how much Chalmers really wanted the job of treasurer. In an election in which Labor repeatedly presented itself as a small target, Chalmers said “no” to the tax cap, over and over again.

Asked on ABC’s 7.30 last month whether next week’s and future budgets would be bound by the tax cap written into Frydenberg’s final budget, he said the cap had been more or less “plucked out of the air”.

And I had the courage, if I can say that, to say that before the election as well as during the election campaign.

And it would be the result of things beyond any government’s control. Unexpectedly, the Coalition almost breached its tax cap in its final year in office because of a flood of revenue flowing from higher commodity prices and a greater than expected number of Australians in jobs. It took in 23.4% of GDP.

What would it have done if it had breached the cap? Given the money back?

Growing demands on the budget

The demands on future budgets will be enormous. Not only paying for the National Disability Insurance Scheme and aged care, but also Medicare, hospitals, defence, education, rent assistance, boosting the scandalously low rate of JobSeeker, and dealing with increasingly frequent floods and climate change.

Australians expect these challenges to be taken seriously.

In Tuesday’s budget, Chalmers will find much of the money for those promises by cancelling decisions made in Frydenberg’s March budget. An upside of having budgets in both March and October this year is that a lot of the money committed in March hasn’t yet been spent.

How do we pay for what we need most?

But beyond that, Chalmers says he is up for a serious conversation about how we pay for the services we need and have a right to expect.

A former head of the prime minister’s department, Michael Keating, wants an expert committee (“not a royal commission made up of lawyers”) to prepare a bottom-up estimate of the extra revenue we will need to guarantee the essential services we are likely to need.

After the committee has developed the estimate, Keating wants a second inquiry to work out how best to raise it.

On one calculation, that means Australia could raise an extra A$140 billion a year and still be taxed at developed country rates. It needn’t all come from income tax. Most developed countries have much bigger goods and services taxes than we do, and many have windfall profits taxes, and effective taxes on energy exporters.

And it needn’t all be raised now. There’s no point in taxing more for the sake of taxing more. But we are likely to need to raise more in future, to help fix the kinds of problems we’re likely to face in the future.

That’s the overdue conversation we have to have, starting next Tuesday.

Peter Martin is Business and Economy Editor of The Conversation and a Visiting Fellow at the Crawford School of Public Policy at the Australian National University.

A former Commonwealth Treasury official, he has worked as Economics Correspondent for the ABC and as Economics Editor of The Age.

First Published in THE CONVERSATION Oct 18, 2022