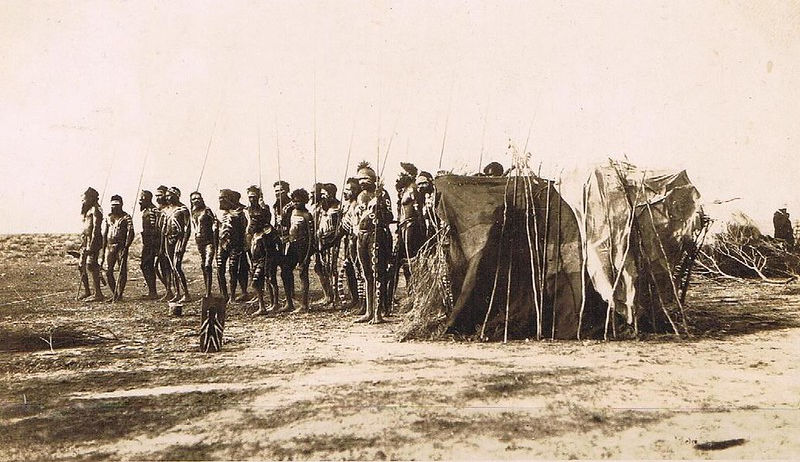 War Memorial Director Matt Anderson said last month that veterans of recent Australian overseas wars had ‘waited long enough’ for adequate recognition at the Memorial. Yet, soon after, he saw no irony in repeating the Memorial’s long-standing opposition to properly recognising and commemorating the Australian Frontier Wars.

The first deaths of Indigenous Australians at the hands of European settler-invaders were in 1788. That sounds like ‘long enough’. The Australian Frontier Wars lasted from 1788 to at least 1928, occurred in all current States and Territories, and caused the deaths of between 20,000 and 60,000 (or more) First Nations warriors and their families, plus much smaller numbers of European settler-invaders and military and police personnel.

First, the Memorial should have an Australian Frontier Wars Gallery as part of the 2.5 hectares of additional space being built in the current extensions project. Professor Henry Reynolds has described the Frontier Wars as Australia’s most important war. The Frontier Wars deserve equal status at the Memorial with the First and Second World Wars, which each have designated galleries. The extensions should never have proceeded but, now that they seem inevitable, reserving space in them for an Australian Frontier Wars Gallery would reduce the area available for a military Disneyland full of Large Technology Objects and machines that go ‘bang!’

Secondly, the Memorial needs to add a prominent panel to its Roll of Honour to commemorate the dead of the Frontier Wars, both First Nations and non-First Nations. It will be impossible to include individual First Nations names, beyond perhaps those of leaders like Jandamarra, Pemulwuy, and Tongerlongeter – that White Australians do not know the names is poignantly significant – but the depth of the commitment of these First Nations warriors (and the suffering of their families, who often died with them) should be recorded in words like those used elsewhere in the Memorial. Lest We Forget.

Thirdly, the words ‘Australian Frontier Wars’ should be carved into the walls of the Memorial surrounding the Pool of Reflection. These words would stand alongside places like Gallipoli, Palestine, France, North Africa, Korea, Vietnam, and Afghanistan, but would go first, reflecting the fact that the Frontier Wars were our first wars, without which Australia would not be what it is today.

These forms of recognition and commemoration are much more decisive and less devious than what the Memorial has done previously: finding and publicising examples of Indigenous men and women who have worn the King’s/Queen’s uniform since 1901; buying and commissioning expensive paintings of massacres of First Nations people; a John Schumann ballad; a sculpture in the grounds; the special exhibition For Country, For Nation.

Through these and other scattered actions the Memorial admits that the Frontier Wars (sometimes rendered as ‘frontier violence’) happened, and that they were nasty, but fails to put them on an equal footing with the ‘service and sacrifice’ of uniformed personnel in our overseas wars. Indeed, the emphasis on Indigenous service in those wars has been seen by some observers as a way of diverting attention from the Frontier Wars.

How would these changes at the Memorial be made? There are three options, not mutually exclusive. First, use existing legislation, reinforced by political suasion. The Prime Minister and the Minister for Veterans’ Affairs (the Minister responsible for the Memorial), could write to the Council of the Memorial setting out the government’s firm view that the functions of the Memorial under section 5 of the Australian War Memorial Act 1980 (particularly the references to ‘Australian military history’) include the depiction and commemoration of the Frontier Wars.

The letter could require that the Memorial use its annual reports under section 46 of the Public Governance, Performance and Accountability Act 2013 to report its actions on the depiction and commemoration of the Frontier Wars, especially how and to what extent the enlarged space of the Memorial was being put to these purposes. It would be a brave Council that would take no actions in response to such a letter from government.

Another option, however, would be for the Memorial to use its corporate planning process to define the Act’s words ‘Australian military history’ to include ‘the history of wars within and outside Australia, before and after 1901, that have been fought to defend Country’. The Memorial has over recent years misused its corporate planning process to narrow the Memorial’s focus from ‘Australian military history’ to ‘Australia’s wartime experience’ (the words under the heading ‘Mission’ in the current corporate plan). The focus needs to be broadened.

A proper rendition of ‘Australian military history’ requires the examination of many facets of our various wars and warlike operations, including their causes and effects. The words ‘Australia’s wartime experience’, on the other hand, have justified the Memorial’s focus (to a microscopic degree) on what Australians did in our wars. The Memorial should revise its corporate plan to return to the intention of the Act and then run its operations accordingly. All of its random recognitions of ‘frontier violence’ could be grouped together in the new Australian Frontier Wars Gallery.

A third option would be to amend the Memorial’s Act to spell out precisely and in detail the requirement for it to properly recognise and commemorate the Frontier Wars. Functions clauses and definitions could be tweaked appropriately, though they would not be immune from distortion through the corporate planning process (where the Memorial has form, as noted above). Getting a Bill onto the crowded Parliamentary schedule would also be an issue, but legislative amendment should be on the medium-term agenda.

Whichever option or options are used, we need, on the government side, courage to pull aside the ‘Anzac cloak’ that has for so long protected the Memorial from proper accountability and full responsiveness to modern Australia. On the Memorial side, we need willingness to make the place less a military mausoleum and trophy house – run mostly by white blokes with a military background and catering primarily for uniformed service people (particularly recent ones) – and more the possession of all Australians, First Nations and non-First Nations.

David Stephens is editor of the Honest History website (honesthistory.net.au) and joint editor with Alison Broinowski of The Honest History Book (2017). He has been convener of the Heritage Guardians group campaigning against the $548m extensions to the Australian War Memorial.

David Stephens is editor of the Honest History website (honesthistory.net.au), co-editor with Alison Broinowski of The Honest History Book (2017), and has been convener of the Heritage Guardians group, opposed to the War Memorial extensions. Sources for this post can be found on the Honest History site. He has contributed many articles to Honest History and Pearls and Irritations. He was previously an Australian public servant and a government relations consultant.