A move away from AstraZeneca is inevitable in Australia’s vaccine rollout, brought on by the need to reach herd immunity and to resolve the blood clot concerns. We forecast plenty of Pfizer arriving from after September, and the possibility of completing a high efficacy vaccine rollout by December. For the coming months, though, the rollout will inevitably be slowed at which time all Pfizer doses should go to those remaining in the most at-risk groups.

The government has announced frequent revisions and changes to targets, all of which provide little improvement in our confidence that they know what they are doing. We show below that they are now in a vicious circle that will only be resolved by strong decision making and unnerving patience by the community. The problem has been worsened now that Pfizer is advised for everyone under 60 years.

One suspects that, in hindsight, if our health experts and politicians had the chance to start again with one vaccine, it would have been with shored up orders of the 95%-efficacy-Pfizer. Most of the government’s problems would not exist had that happened.

The chance to rectify that early mistake has come. We predict delivery of 31 million doses of Pfizer in the last four months of the year, enough for everyone who wants it (or the high efficacy Novavax and Moderna vaccines).

In theory, we could reach herd immunity by Christmas, and consider opening our international borders. However, there will not be enough Pfizer to meet the demand for the next few months.

Waiting until Pfizer doses arrive on stream in large batches means we need to be patient with the vaccine rollout and hold our nerves with our quarantining and contact tracing systems.

It also requires a complete turnaround in how the program is managed.

We explained in Part 2 how the Vaccine Roadmap of 14 March, and later data, enable us to predict the delivery of vaccine doses month by month for 2021. Our predictions are shown below in table and graph form. 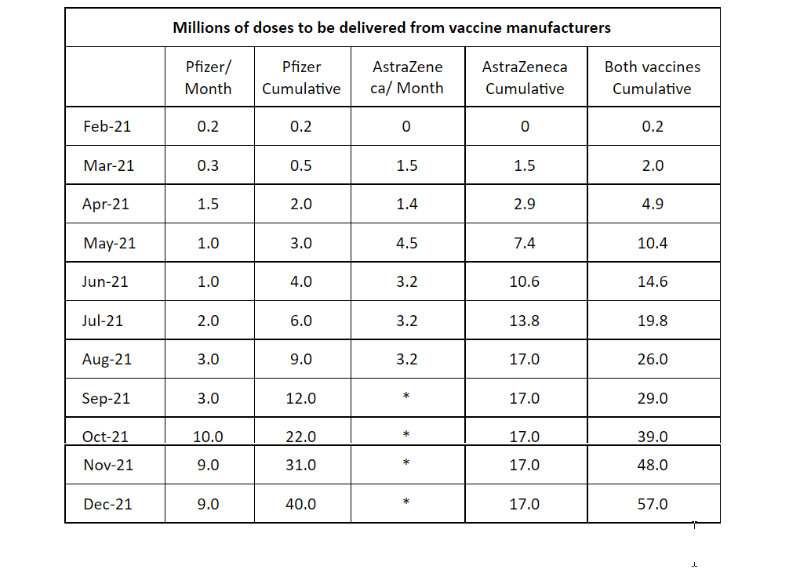 More AstraZeneca would be delivered from September but we have excluded numbers (*) from the table as the vaccine would be surplus to Australia’s requirements – it would not make sense to have the high efficacy Pfizer doses arriving by the millions and not use them (We have not included Moderna and Novavax deliveries due to uncertain delivery dates.)

Thus, it is estimated that up to the end of August, 26 million doses of the two vaccines combined would be delivered (though not necessarily injected), with another 31 million doses of Pfizer arriving from September to December. It is expected that the number of AstraZeneca doses injected will be significantly below the predicted number of doses delivered. 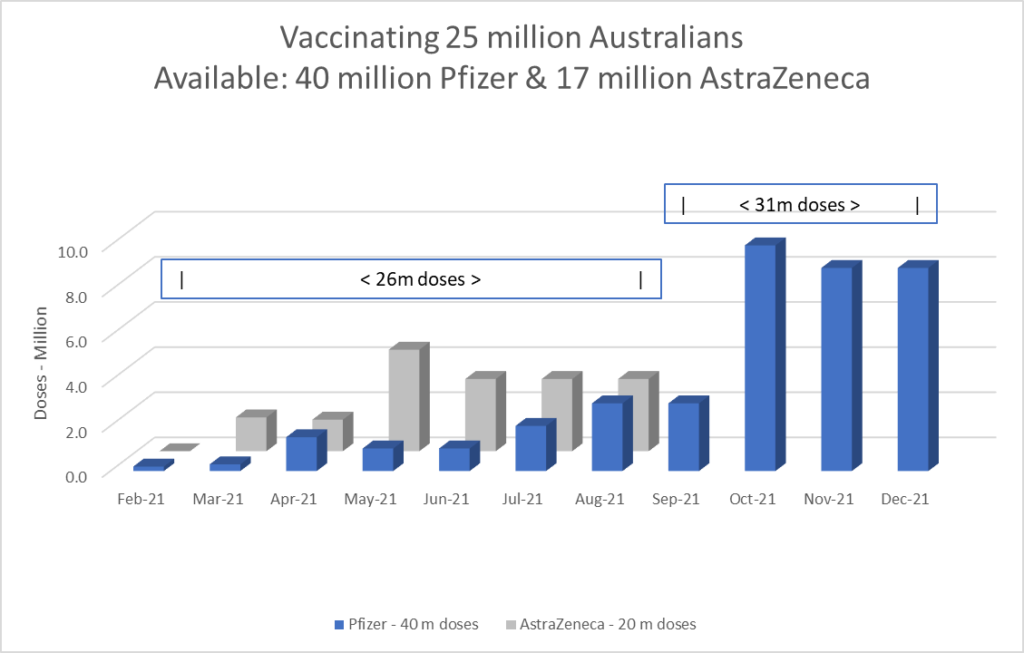 In summary, there will be plenty of Pfizer for those Australians who want it in the last quarter of 2021.

The vicious circle confronting our decision-makers

There are two forces at work throwing the government’s rollout into chaos.

First, the Delta Covid variant which appeared in early June in Victoria is quoted as up to 70% more transmissible than the Alpha variant. It means that – all else being equal – the risk of being infected is somewhat greater for everyone, even for many of those who are fully vaccinated. Anecdotal evidence indicates other concerns with the Delta variant, including more likelihood of hospitalisation.

With the appearance of this strain, there seemed to have been a significant shift in the Commonwealth government’s and National Cabinet’s objectives. Originally the main priority of the vaccination campaign was to prevent serious illness and deaths in groups 1a and 1b, including those 70 or older.

However, with concerns about Delta transmissions, the push began to vaccinate the young, group 2b. To increase uptake, Pfizer, which is recommended for that group, was opened up to those aged from 40 (or 30) to 49. The governments might have intended to open it up to other age groups.

This creates supply problems for vaccinating all 7.0 million in the 2b cohort. For them, 14 million doses of Pfizer will be required. We forecast only 9 million doses to be delivered up to the end of September. The shortfall is about 5 million. Already in mid-June, we hear of supply shortfalls for Pfizer as those aged 40-49 roll up. Only 1 million doses were delivered in June.

The young are said to transmit the virus more widely and rapidly than older people. If they are allowed to ‘run loose’ there may be collateral damage for the most vulnerable from an outbreak, in the form of more hospitalisations and deaths and more who suffer from long Covid. We estimate that up to 3 million young Australians cannot be properly vaccinated until October.

The other force affecting the rollout is the policy regarding the risk of blood clots from the use of AstraZeneca.

Messages have become confused. On the one hand, it seems the condition is now much more treatable, meaning the policy for the under 50s possibly could have been withdrawn and AstraZeneca used for them.

On the other hand, there have been two deaths from the syndrome in Australia, a 48-year-old and a 52-year-old. Experts were debating whether to extend the age range to the under 60s. As I write, this decision has been made: Pfizer will now be preferred for the 50-59 age group as well. The AstraZeneca vaccine will now only be recommended for use in people aged 60 and over.

This change suddenly means we will need about 3 million extra doses of Pfizer, and need that many fewer of AstraZeneca.

Conservatively, for the age range 16 to 59, we estimate a shortfall of Pfizer of about 8 million doses until October. This extra demand equates to an extra 8 million doses of AstraZeneca produced by CSL that will not be required; 2 to 3 million doses per month could be added to all the others sitting on the shelves (or donated to needy countries).

In summary, the intention to vaccinate the young because of their higher transmission propensity, combined with the blood clot restrictions, have increased the demand for Pfizer to the end of September by about 17 million doses, yet with only 9 million coming!

But with the blood clot genie out of the bottle, surely there will be even greater resistance to AstraZeneca amongst those who are 60 or older. Expect the daily vaccine numbers to plummet across all age groups.

Hence the government is in a bind. Those aged under 60 are restricted to the Pfizer vaccine for which we don’t have sufficient supply. Yet, we do have millions of spare AstraZeneca which would make them and the community more Covid-safe if it were recommended for them.

Confoundingly, we hear that a major advertising campaign will be launched in July to encourage under 40s to get vaccinated. We need to ask, vaccinated with what?

While the young are beseeched to have a vaccine which we don’t have enough of, older Australians, even those who have been vaccinated with AstraZeneca, might have to remain indoors in order to avoid infection from the highly mobile youngsters.

Hence, the decision needs to be made to prioritise Pfizer for the most at-risk still to be vaccinated.

We could have herd immunity and open our borders by Christmas – But will it happen?

AstraZeneca will be quickly phased out: it is now no longer advised for anyone under 60, and herd immunity seems impossible with it as a primary vaccine.

This means the rollout will have to be much slower until Pfizer arrives in large numbers in October. (Unless some can be fast-tracked.)

The aim of vaccinating the young should be dropped for the time being. If the supplies of Pfizer are limited until the end of September it should be used to vaccinate those remaining frontline workers and those remaining in the most at-risk groups, which includes those 70 or older and those with severe medical conditions.

There will be many in the 70 and over age group holding off because they perceive Pfizer to be more effective against long Covid and provides higher personal immunity. It would be unconscionable to save the lives of those under 60 by not recommending AstraZeneca for them due to blood clot risk, yet risk the lives of those over 60 by not offering an alternative to AstraZeneca.

However, once supplies ramp up, a complete rollout of Pfizer or equivalent can be completed by December, given the tens of millions of doses on order.

Until then our current nationwide strategy of maintaining zero community cases must continue, via hotel or remote quarantining and through contract tracing. All Australians, including the young ones, will have to continue safe-Covid practices until we achieve a satisfactory rollout and immunity level.

Occasional community outbreaks may occur, but since October last year, we have shown that they can be doused quickly. Thus, we will need to hold our nerves for some months yet.

A successful vaccine rollout will open up society again, returning us to close to our normal pre-Covid lifestyle and economy and open up our international borders, allowing Australians to travel overseas and for us to accept visitors.

But we aren’t there yet. It is one thing to have the doses, but it is another matter to inspire people to want them. We have to increase the community uptake of vaccines, well above the 70% that surveys are predicting at the moment. It is hoped that people will react positively to being offered the best vaccines available. The government also needs to advise whether mixes of vaccines will be permitted, with boosters available using a different vaccine to the first one.

The loss of confidence in our decision-makers needs to be restored. The politicians and health officials need to be more transparent, provide us with more data and drop the politics.

Most importantly we need a federal government that is up to the task. They will need to gear up for four full-on months, preparing vaccination hubs and other outlets to reach the finish line.

Our best vaccination day so far was 11 June when 153,338 doses were given. From the beginning of September, we might still need to inject 24 million doses of Pfizer. For the four months to December, that means 200,000 a day. This is achievable!

The federal government has said they would like to complete the full rollout of two doses to all Australians who want to be vaccinated by the end of October, perhaps by the end of December 2021.

The challenge for a good outcome for Australia by Christmas is there for them. Are they up to it?