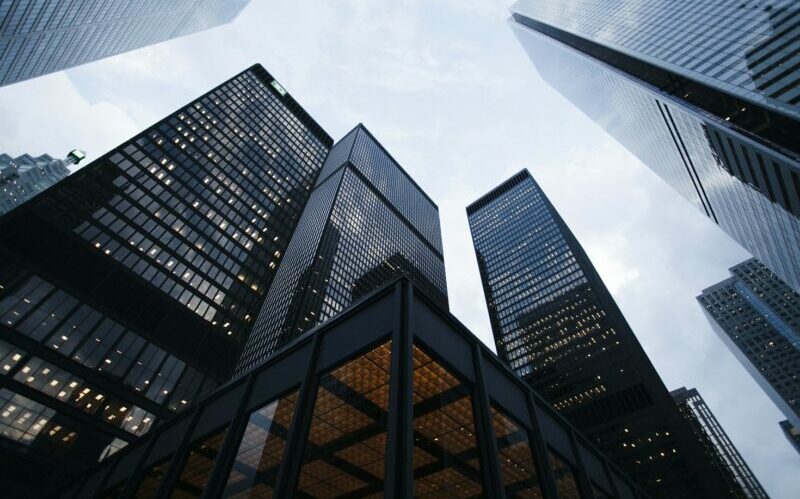 During the pandemic, leaders have urged people to make sacrifices for the common good. But if those pleas come from corrupt leaders, they are less effective. Unfortunately, over the last decade, Australia has worsening corruption.

Compliance with public health restrictions is a key part of tackling COVID-19. The little-read fine print of the recent Doherty Institute modelling noted (on page four) a major uncertainty for “transitions to later phases (C and D)” in “the potential for declining compliance with restrictions”.

So daily media conferences are replete with leaders’ pleas for compliance for the common good. Such pleas are compromised if citizens believe those leaders themselves have little interest in the common good. The more leaders act as if the rules don’t apply to them, the more there is a reek of corruption about authorities, the less people will be prepared to follow requests. Corruption is therefore a major problem for countries battling Covid.

In a recent piece for The Conversation I argued the importance of social trust in tackling Covid. The level of corruption is one important factor hampering social trust.

In further research, I’ve looked at trends in corruption over the past decade across OECD countries. These show a range of patterns, which are illustrated in the graph by six countries. A score of 100 indicates little or no corruption, while 0 reflects endemic and widespread corruption.

Since 2012, many OECD countries, like New Zealand and France in the graph, have seen little change. Some, like the USA, saw ups and downs. More encouragingly, others like Italy have improved their performance considerably. Still others, including Australia and Hungary, have seen significant declines. 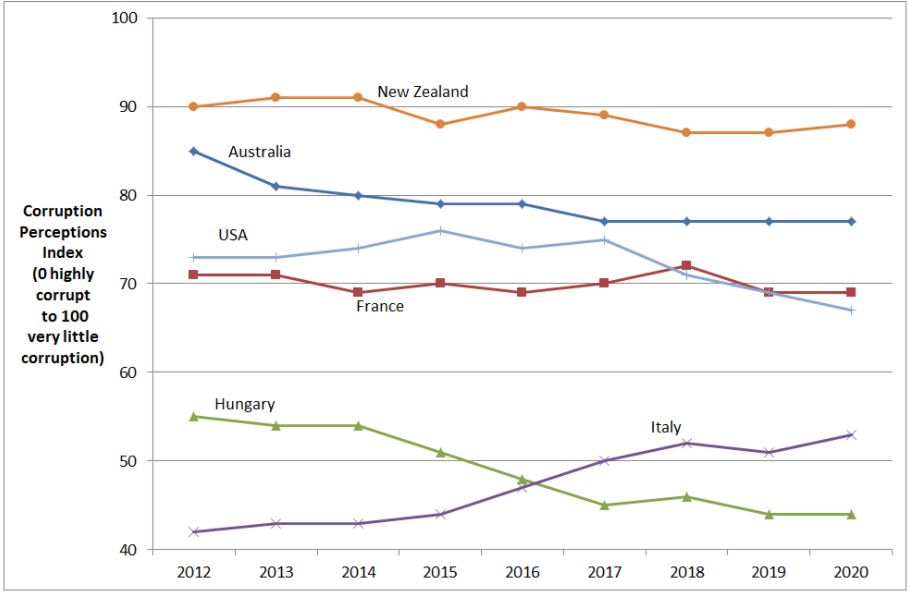 Corruption is broadly defined. It includes outright fraud and bribery. It also includes the misuse of public institutions for private gain or the benefit of small groups. Such as situations where interests “capture” state bodies and run them for their own benefit, at the expense of the general public. Or, at the more minor end, using public planes for private Father’s Day trips.

The trends for the six countries in the graph illustrate patterns across the OECD countries, and indicate some of the key drivers.

New Zealand consistently has one of the highest scores on the index, along with several Nordic countries. Both it and France (at a lower base score) show stable levels across this period, a pattern shared with many OECD countries. There have been small movements up or down, but the overall score remains about the same.

Some countries, illustrated in the graph by the USA, have seen more significant movements up and then down. In the USA, data from the World Happiness Report 2019 shows

“… confidence in the national government fell markedly during the Global Financial Crisis in 2008. At the same time, perceptions of corruption rose … there was widespread public criticism that politicians were bailing out rich bankers while ordinary people suffered.”

In the graph, the USA saw a slow recovery in its score on the Corruption Index until 2017. However, the index fell considerably during the years Donald Trump was president, down eight points from 75 to 67.

A much more positive story is shown in the graph by Italy. Until 2011, while Silvio Berlusconi was prime minister, there were many allegations of corruption in his government. Since 2012, Italy’s score has climbed from a low 42 to 53. This was not only recovery from Berlusconi: there have also been institutional changes. The 2019 Transparency International report (p22) cited:

But not all countries had such positive stories — some saw major declines in their corruption scores. Two poor performers, illustrated in the graph, were Hungary and Australia.

Hungary, with dramatically increased perceptions of corruption, had the biggest fall in Europe in its Transparency International score: down 11 from 55 in 2012 to 44 in 2020. This has been largely due to the increasingly authoritarian rule of Prime Minister Viktor Orban since 2010. In 2019, The Economist documented how “Orban hollowed out Hungary’s democracy”.

Thankfully, Australia has much lower perceptions of corruption, and higher scores on the index throughout these years. However, its rating has also fallen significantly, from 85 in 2012 to 77 in 2020.

“Unfair and opaque political financing and undue influence in decision making and lobbying by powerful corporate interest groups, result in stagnation or decline in control of corruption.”

A clue to such “undue influence” is that three of the few OECD countries with strong negative trends in the past 10 years — Canada and Chile as well as Australia — all have large resource sectors.

In September 2020 international lobbying group InfluenceMap published a report, “Australian Industry Associations and their Carbon Policy Footprint“. It documented not just the range of misinformation publicised by resource sector groups, but also the extent to which those groups have financing and personnel links into the highest levels of government. The governance experts and business people surveyed by Transparency International have good reasons for their fears about corruption.

“To have any chance of curbing corruption, governments must strengthen checks and balances, limit the influence of big money in politics and ensure broad input in political decision-making. Public policies and resources should not be determined by economic power or political influence, but by fair consultation and impartial budget allocation.”

Unfortunately, on most of these measures, the Australian government is moving in the wrong direction — as the graph shows. In many recent actions, members of the government show little adherence to “the common good”.  So why should anyone else listen to their appeals? 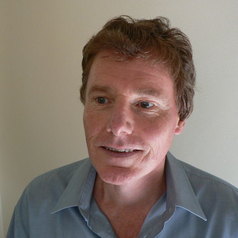 Tony Ward is, since 2011, a research fellow in history at the University of Melbourne. Prior to that, he had a varied career in academia, senior executive positions in the state public service, and 17 years as principal of an economic consulting company. Tony has published two books: Sport in Australian National Identity (Routledge, 2010) and Bridging Troubled Waters: Australia and Asylum Seekers (Australian Scholarly Publishing, 2017). He has also published numerous articles in academic journals, ranging across the economics of inequality, sports history, and Australian migration history. In addition, he has written several well-read pieces on The Conversation website, and contributed to several submissions to the government on economic and social impacts of public policies. Tony has a PhD in economic history from Monash University (1984).