Australia’s immigration policy debates over the past 30 years have largely consisted of the usual suspects trotting out the usual lines.

They generally divide into two camps – the high migration crew, hungry for the Government to go hell for leather on growing the intake, lining up against the ‘keep immigration to the minimum possible’ crew because they are worried about the environmental impact, foreigners taking jobs and a bit of xenophobia thrown in.

With international movements largely shut due to the pandemic, advocates are lining up to tell the Morrison Government how Australia should approach immigration post-COVID-19.

The high migration crew, including the Business Council of Australia, the Australian Chamber of Commerce and Industry, the Australian Industry Group, the Committee for Economic Development of Australia, the Property Council, the Tourism Industry, the Agriculture Industry and the International Education Industry, appear to have won over the Morrison Government which is making a u-turn on migration after telling temporary entrants to go home only 12 months earlier.

The ‘keep immigration to a minimum’ crew, which is angry about Morrison’s quiet u-turn, has in Australia traditionally been led by former Monash University academic Bob Birrell as well as media commentators including Judith Sloan who writes in The Australian and Crispin Hull writing in The Canberra Times. The Sydney Morning Herald’s Ross Gittins has expressed concern that immigration is changing the Aussie way of life. A small website called Macrobusiness has emerged catering for the anti-immigration crew but with none of the deep knowledge of immigration that Bob Birrell developed over 50 years.

There is also the perennial Pauline Hanson One Nation party which argues for the permanent migration program to be cut to 70,000 per annum, but without specifying where the cuts should fall, and a Trump style ban on entry from certain muslim countries to reduce the risk of terrorism. Hanson expresses no concerns about the rapid emergence in Australia of right wing white supremacists, possibly because many of those would be in her own party.

Crispin Hull argues that ‘journalists must stop the innate bias …that immigration and lower population growth or falling population are “Bad Things”. They should be reported as “Good Things”. Hull would thus be very happy that while the 20th Century was one of population boom, the 21st Century will for most developed nations, plus China, Russia and most of Eastern Europe, be one of population bust. Of course part of that bust will be severe population ageing.

Contrary to the extensive research over the past few decades, Hull argues that population ageing is actually good for the economy because lots of older people will in future be working in their 80s. While there may be a small increase of people aged 70 and 80 that remain in the workforce, the number of retirees in Australia, after being relatively flat for many years until 2008-09 when Australia’s working age to population ratio peaked, surged by over a million in the past ten years to almost 4 million. It is likely to exceed 5 million by the end of this decade within an overall population of between 27 and 29 million (see Chart 1). 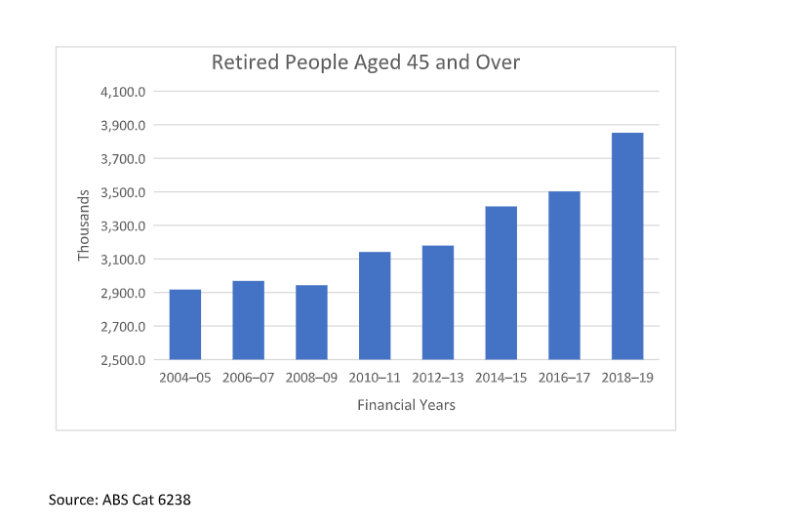 Arguing that population ageing will be a positive for the economy is a bit like arguing the earth is flat, or denying man-made climate change, or for economists, trying to refute Franco Modigliani’s life cycle hypothesis. The reality is that on average, retirees earn little income, reduce their expenditures compared to when they were younger, pay very little tax but make extensive use of health, pension and aged care services.

We have to plan for that rather than pretend it won’t happen.

Hull says we should be more worried about the costs of bringing up children and a younger age profile in the population. But he forgets that the baby boom of the 1950s, plus post-war migration, turbo-charged economic growth that enabled us to pay off the massive government debts incurred during World War 11. Babies go onto become working adults who do earn income, spend money, pay taxes and take up few government benefits.

When those boomer babies hit the labour market, aggregate demand took off and for the next 40-50 years, governments implemented a multitude of policies such as ‘fight inflation first’ and ‘keep a lid on wages growth’ and ‘incentivise high income earners to work harder by cutting their taxes as well as the taxes of corporations’. These policies were driven by strong aggregate demand associated with the fastest growth in the labour market in our history. That will never happen again.

Like many anti-immigration advocates, both Hull and Gittins gush about the March 2021 quarter GDP figures being associated with the lack of immigration but ignore the fact the March quarter followed two quarters of extensive lockdowns, unprecedented levels of fiscal stimulus and government debt, emergency level interest rates, massive increase in household debt, a record iron ore price and large numbers of Australians withdrawing billions of dollars from their limited superannuation savings to spend on surviving. Surely Hull and Gittins do not imagine that will be repeated forever while our population ages?

Another in the anti-immigration camp, Judith Sloan, has previously expressed surprise that net migration has for over 20 years been higher than the level of natural increase . This is similar to Pauline Hanson’s concern that net migration contributing to 60 percent of our population growth is too high.

Anti-immigration advocates often dismiss the painful structural adjustment that will be needed as we age and inevitably move into population decline. Forcing that to occur at a faster rate would just makes the pain even greater.

Neither Sloan nor Hull discuss the point at which population ageing and decline becomes unmanageable. Countries such as Japan, China and many parts of Europe will face that very challenge over the next few decades. Japan has been facing that challenge for the longest and is now desperately trying to work out how to further boost immigration to limit the rate of population decline.

Just ask the Japanese Ministry for Finance how happy they are about Japan’s population declining at over 500,000 per annum together with the prospect that this decline is forecast to accelerate.

The Immigration Hell for Leather Advocates

On the other hand, we have the ‘let’s go hell for leather on immigration’ advocates. Together with pressure from Treasurer Frydenberg to show his policies will deliver rapid economic growth, these advocates have convinced Treasury to forecast in the 2021 Budget, the steepest increase in net migration in Australia’s history. https://independentaustralia.net/politics/politics-display/treasury-knows-high-levels-of-migration-crucial-to-economic-growth-,14849

From two years of negative migration in 2020-21 and 2021-22, the Treasury is forecasting a steep rise to 235,000 per annum from 2024-25 onwards. If adopted by the Treasurer in his forthcoming Inter-Generational Report (IGR), net migration at a long-term average of 235,000 per annum would be significantly higher than in any previous IGR. Even bigger than in Wayne Swan’s IGR following Kevin Rudd’s talk of a ‘big Australia’.

Yet the Government has given no indication of the composition of this forecast or of the policy changes that would be needed to deliver it other than a Treasury assumption that the formal migration program (which counts visas issued rather than the contribution of migration to population increase as net migration does) would be increased to 190,000 per annum from 2023-24. Treasury must think that by then the Prime Minister will have finished ‘busting congestion’ which was the original but fake rationale for reducing the program to 160,000.

All other things equal, net migration averaging 235,000 per annum would certainly boost economic growth and slow the rate of ageing (there would be more workers per retiree). It would push out the day natural increase in Australia becomes natural decrease well into the second half of this century, depending on what happens to the fertility rate.

But it raises a range of issues.

Firstly, unless there is a very strong labour market and significant changes to current immigration policy settings, it is unlikely net migration averaging 235,000 per annum could actually be delivered. On current policy settings, I estimate long-term net migration at around 175,000 per annum. But that would not be enough to get to the level of real economic growth that Treasurer Frydenberg would be demanding Treasury forecast for the forthcoming IGR. Frydenberg will not accept long-term real economic growth of less than 2.5 percent per annum.

For example, over 40 percent of net migration would have to be delivered with overseas students. But our main source of overseas students, China, is unlikely to again reach the heights of 2017-18 and indeed may continue to trend down given our fractious relationship with the Chinese Government. In addition, the Government significantly tightened visa policy in September 2019 for students from India and Nepal (our second and third largest sources for students) due to concerns about visa compliance. That resulted in a very sharp decline in offshore student visas to nationals from those two countries.

Moreover, Immigration Minister Hawke has now allowed students to work full time in industries such as tourism and hospitality, agriculture and aged care. That will mean an increasing portion of the student intake will be focused on full time work rather than study. That has serious long-term consequences.

Another risk with running a large migration program when the labour market is weak is that a substantial number of migrants will not have either an employer sponsorship or an existing job in Australia. With a four year wait for social security, the risk of many migrants becoming destitute or being at even greater danger of exploitation rises. Large numbers would be forced to leave thus making the 235,000 net migration forecast even more uncertain.

Finally, there is little evidence Treasury has sought to communicate its forecast for net migration to the various Commonwealth/state/local government agencies that would need to adjust their planned service delivery for such a high level of net migration. In fact the head of the Department of Home Affairs, Mike Pezzullo, told Senate Estimates that he was not even aware of the Treasury forecasts.

If the head of the agency responsible for delivering the migration forecasts is not aware of them, what hope can there be for other agencies and industries that will be impacted?